Living in America: The best the U.S. has to offer in pro boxing

Share All sharing options for: Living in America: The best the U.S. has to offer in pro boxing

One of the more common complaints, or more common things used as "evidence" that boxing is dead or dying in America, is that young Americans simply don't turn to boxing any longer, certainly not the way they used to. It's an ideal past for the sweet science, all rugged young men escaping the strains of poverty by wandering into boxing gyms across this great nation of ours, picking up on the finer points of the craft from some cigar-chomping, old almost-was that runs some rinky dink facility in the rougher part of the cities. It's all very nice.

And yes, the heavyweight division in particular has no doubt suffered from boxing's decline as a mainstream sport. Boxing is not a mainstream sport in America, nor is it likely to ever become one again. Mike Tyson and Oscar de la Hoya largely are responsible for every big fight of the last 20 years by way of American interest; you get some Evander in there, too, and Floyd Mayweather Jr. almost had something until that stupid fake retirement of his.

Whereas in the past we may have been wondering what on earth would happen when Wladimir Klitschko and Brandon Jacobs collide, we are now wondering if Jacobs will be there when our pick in fantasy football rolls around. Lebron James? 6'8", 275, lean and fast. Allen Iverson could have been outstanding. Imagine a different world where these guys take up boxing, and then don't worry about questioning their chins. Just dream.

These athletes aren't coming to boxing anymore, and they aren't going to start. It's too rough a go to break in and make real money. Too many hard nights. And while no sport as a professional is easy, boxing is one of the most grueling of them all, from training camps to weight cutting to fight night itself. (Don't get too stuck on Chris Arreola for this point.)

So what do we have in the ring? The stars and stripes may not mean what they used to in the boxing world, but Old Glory ain't quite dead, either. 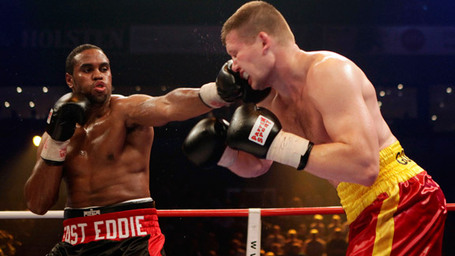 "Fast" Eddie is slick, smart, and, well, fast. So he's not Tyson or Holyfield or Ali or Louis or Frazier or whatever. It's no secret that American heavyweight boxing has been in the tank since the glory days of Holyfield hit their end, and it's also no secret that that is unlikely to change.

As it stands, Chambers gets my pick without question as the best heavy from the States. His recent win over Alexander Dimitrenko was impressive, and I still genuinely feel he should have beaten Alexander Povetkin (Chambers' lone loss as a pro) and that he would do so should they fight again. Chambers made bad mistakes in that fight, obvious mistakes, and he's stopped doing those things in his last few outings.

He will almost surely never capture the imagination of much of anybody, and either Klitschko probably chops him down fairly handily, but Chambers is a legit talent, too. He could wind up being a right-handed version of Chris Byrd.

Other Contenders: Kevin Johnson could soon be the key challenger to Chambers' "throne" ... Chris Arreola makes it hard to take him seriously ... John Ruiz is always around -- always ... Tony Thompson is probably the most widely overlooked American heavyweight

Cunningham (22-2, 11 KO) is clearly the choice at cruiserweight, with few viable challengers. His December 2008 fight with Tomasz Adamek was an instant classic and one of the greatest fights in the history of the cruiserweight division, and sadly Cunningham has been unable to reap much by way of benefits. He's still rather unknown in his home country; it was the Polish Adamek that drew the house in Newark for that fight. It's no surprise, though. Prior to the Adamek bout, Cunningham's three biggest fights had taken place in Poland and Germany. He's an athletic, vulnerable, sound fighter with more pop than his 50% KO rate might suggest. He makes for good fights and -- like the division as a whole -- deserves more TV time.

Other Contenders: Matt Godfrey would be my No. 2 ... BJ Flores is making a career out of annoying people, I think, and when he's done he'll just go to commentary 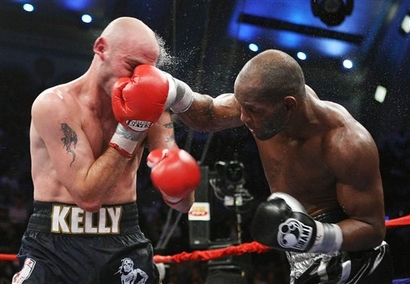 Three divisions, three Philly fighters. The 44-year old B-Hop continues to rank No. 1 in the world at 175, but it's kind of iffy, and that's with all respect to Hopkins. He did beat Antonio Tarver to win the Ring title, and he beat him bad, but since then he's fought three times: Beating Winky Wright at a 170-pound catchweight, losing to Joe Calzaghe at 175, and beating middleweight champ Kelly Pavlik at 170 again. He's also contemplating a move to cruiserweight to face Tomasz Adamek, which has been an up-and-down rumor for much of 2009.

Dawson is almost 20 years younger and has a far brighter future, but I think most everyone would pick the savvy Hopkins to beat him one-on-one still. Dawson can up his reputation and silence some critics if he can score a convincing win over Glen Johnson in their November 7 rematch.

Other Contenders: Ancients Roy Jones Jr. and Antonio Tarver are still kicking, and sadly are still near the top of the American pack ... Chris Henry looked good in his last fight, not so good in the one prior

Maybe a bit of a controversial pick. Dirrell is the better young super middleweight ex-Olympian Andre, in my view, and Jermain Taylor is just a mess right now. This will thin out and become easier to gauge once the Super Six has gotten rolling, as all three of those men are competing. Dirrell has really special talent, I think, and we'll find out what kind of fortitude he has soon. Someone's going to give him a serious test.

Other Contenders: Ward and Taylor could be argued; Ward for the same reasons as Dirrell, and Taylor on past accomplishments ... Allan Green gets on a lot of peoples' nerves and probably talks too much, and has backed out of some fights and basically gotten thrown off of ESPN2, but he can fight

Shallow division, but Pavlik is the legit world champion and has dominated at 160 pounds. Hopefully we'll see him fighting Paul Williams or Sergio Martinez next, because Pavlik needs a bigger win than Marco Antonio Rubio and Gary Lockett to get some of his mojo back.

Other Contenders: Winky Wright still projects as a tough challenge for Pavlik, but he is aging and seems somewhat indifferent to fighting anymore ... Young Daniel Jacobs should find his way into the top 10 of the division soon if things keep going as they have been

I'm slotting PW in here because he really has no division. His last fight was a dominant win over Wright at 160 pounds, he's a former titleholder at 147 and says he could still make that weight, and he destroyed Verno Phillips at 154 late last year. Pound-for-pound, I genuinely believe Williams is America's best boxer... at least until we see how You Know Who looks in September.

Other Contenders: James Kirkland; what could have been ... Veteran Cory Spinks didn't deserve his '08 loss to Verno Phillips, and has bounced back nicely ... Deandre Latimore is still just 23 and gave Spinks a good run 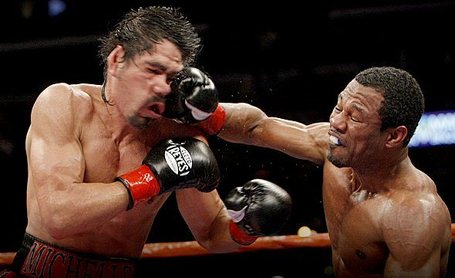 Sugar Shane's reclaiming of the welterweight throne -- however debatable -- earlier this year was a stunning story. He was a live dog to be sure, because he's Shane freaking Mosley, but he starched Margarito. Forget everything else for just a moment and remember how absurdly easy Shane made it look that night. He beat Margarito like he was a nobody.

There's also Floyd Mayweather Jr., of course, who returns at welterweight or a catchweight just below on September 19 against Juan Manuel Marquez, lightweight champion of the world. If Mayweather looks sensational upon return, he takes back his spot as the No. 1 welterweight, probably.

Other Contenders: Young titlist Andre Berto may just meet Mosley sometime soon, and it would be a huge step up in competition ... Zab Judah would probably like to think he belongs in this discussion

Bradley looked impressive for three rounds with Nate Campbell, but it was still just three rounds of action. He took his lumps against Kendall Holt earlier this year in a heck of a good fight and recovered twice from knockdowns to win a clear decision. Bradley's one of those guys that just seems to shoot up the ranks. He's confident, he keeps himself in utterly phenomenal shape, and he seems like he has a lot of respect for the game and all of his opponents. The kid's a winner.

Other Contenders: One of boxing's best, deepest divisions. Holt and Campbell are both still serious contenders, and then you have very young WBC titleholder Devon Alexander of St. Louis, Brooklyn's Paulie Malignaggi teetering on the brink of relevance, Top Rank prospects Lamont Peterson and Mike Alvarado, and always-dangerous knockout artist veteran Randall Bailey 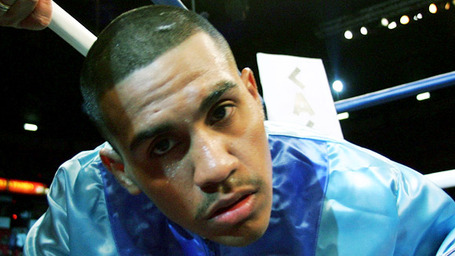 Diaz is still young and still quite good. It's not his actual heart I really question, or even so much his guts, but what drives that: His desire to fight. Diaz is a recent college graduate (did you ever hear he went to college?!??!) who is now looking at law school. How inviting is getting hit in the face when you go to work, plus the training, plus giving promoters and corner men and whomever else part of your money, when you could maybe just be a lawyer and screw people out of their money? (No offense, lawyers.)

Diaz is a pure pressure fighter and the only time I haven't been entertained watching him work was against a version of Michael Katsidis that I hope the world never sees again.

Other Contenders: You can make a strong case for Rolando Reyes right now ... Vicente Escobedo *might* be living up to his inclusion in Fight Night Round 3

No question it's "The Ghost" at 130, and he hasn't even accomplished very much. There is little competition and once we're past featherweight, American inclusion in the sport gets pretty spare. Guerrero has a title fight on August 22 against Malcolm Klassen.

Other Contenders: Jason Litzau is "All-American," but he's been steamrolled twice and doesn't look like a real contender ... Tyrone Harris recently shot his name way up the ranks at 130

Luevano's style doesn't lend itself too well to TV and the only times you'll see him are as a featured Top Rank bout on a PPV undercard. He's a very, very sound fighter in pretty much every single facet of the game, and he's probably underrated at this point. I think he's the clear No. 1 at 126 for Americans, and a clear No. 2 overall in the world.

Other Contenders: Rocky Juarez is surely at his best down at 126 pounds instead of 130, but he still hasn't ever gotten over the hump

Now we get into the lean divisions for American participation.