Share All sharing options for: TV and Internet Fight Schedule - Weekend of August 14 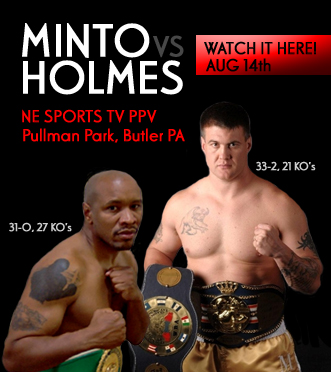 After a very lackluster week last week, there's a lot of action going on this weekend, even if there aren't any high profile fights.

Armstrong Cable; Mintofight.com - 9:00 p.m. Eastern ($10.00) - Brian Minto vs. Donnell Holmes.  Those of you fortunate enough to live in the parts of Pennsylvania, Virginia and West Virginia covered by the nation's 16th largest cable provider will be able to watch for free on Armstrong's sports channel.  The rest of us will have to buy the fight on internet pay per view, or just forego the opportunity.  I've never seen Holmes fight before, but Minto always brings it, and it's at least a big step up for the undefeated Holmes.  If Minto can get by Donnell Holmes, I think he should try to wipe out all the undefeated pretenders - Faruq Saleem, JD Chapman, David Rodriguez, etc.

ESPN2, 10:00 p.m. Eastern - Vivian Harris vs. Noe Bolanos; Danny Garcia vs. Jermaine White; Deontay Wilder vs. Travis Allen.  Keith Thurman is also on the card and might make it on in the case of a short main event.

Telemundo, 11:35 p.m. Eastern - Antonio Pitalua vs. Jose Reyes.  Pitalua is coming fresh off his destruction by Edwin Valero.  Reyes is a solid fighter with a couple of decent wins over Ivan Valle, Noe Bolanos and Javier Jaregui, but has lost his past two, and has six losses, all to decent competition.  On paper, this is probably the most even bout of the night.

Top Rank PPV, 9:00 p.m. Eastern ($39.95) - Nonito Donaire vs. Rafael Concepcion; Steven Luevano vs. Bernabe Concepcion; Mark Melligen vs. Michel Rosales; Anthony Peterson vs. Luis Arceo.  BLH will be providing round by round coverage of this one.  Probably the closest matchup here is Luevano vs. Concepcion.  Concepcion looks like a promising prospect, but he's taking a huge step up with this one.  Lord knows Bob Arum would probably prefer that Concepcion win, as he has a much more fan-friendly style than Luevano, and I doubt he'd make this matchup unless he either thought that Concepcion was ready for it or thought he wasn't going anywhere.  Rafael Concepcion is only 13-3-1, but he's won an interim title, and has wins over AJ Banal and Kermin Guardia, together with an exciting and closely contested loss against Jorge Arce.  The other two fights are just showcases, and probably not exciting ones at that.

Square Ring PPV, gofightlive.tv, 9:00 p.m. Eastern ($34.95) - Roy Jones Jr. vs. Jeff Lacy; Danny Green vs. Julio Cesar Dominguez; B.J. Flores vs. Epifanio Mendoza; Jason Litzau vs. Verquan Kimbrough.  The lower undercard of this one nominally looks better than the Top Rank pay per view.  Dominguez is making his first US appearance in what is supposed to be a showcase fight to set up a Roy Jones-Danny Green fight, if each can win their bouts here.  That fight would likely be in Australia, and could rival the Australian record $8 million purse for the Green-Mundine fight.  Flores takes on another big puncher with a sketchy chin.  Maybe he'll work to erase our memories of his wins over Darnell Wilson and Jose Luis Herrera.  Litzau tries to be flashy like Roy, but without nearly as much success, so he makes sense to fill out the card.  Good job of also making this one available on the internet, since a number of cable providers probably won't be able to air it due to other pay per view obligations.

Televisa, 10:00 p.m. Eastern - Francisco Rosas vs. Juan Carlos Reveco for a vacant light flyweight title.  Rosas recently lost a close decision to mini-Valero Roman Gonzalez, while Reveco is a former titlist who's most prominent fight was a close loss to Brahim Asloum.  Seems like a pretty even match on paper between two deserving challengers.  This isn't being televised in the US, but those of you living near the Mexican border should be able to steal a signal for it.

Gofightlive.tv, on demand, free - Hank Lundy vs. Gary Bergeron.  Who knows who else is on the card, since it's changed a lot from the poster and the promoters don't have a website.  My favorite though - Elizabeth Sherman is on the card.  Note the boxrec entry under her pro debut: "Pro debuts for Sherman and Ward. Samatha Ward has no boxing skills."  Gotta love when they provide their own commentary.

Elsewhere in the boxing world: