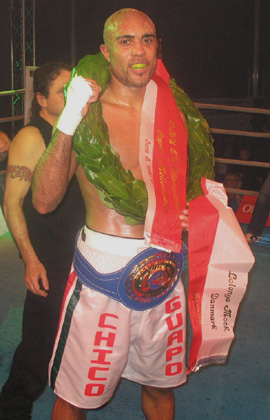 This weekend, Beibut Shumenov may be trying to make history in becoming the fastest to win a light heavyweight title.  However, it appears that Universum promotions may be throwing a wrench into the matter.  According to a press release from Universum, Campillo violated an option agreement with Universum in making the bout with Shumenov, and they want him to fight Jurgen Braehmer instead:

On the occasion of to the world title defence of Universum fighter Hugo Hernan Garay (Argentina) on June 20th 2009 in Santa Fe (Argentina) against Gabriel Campillo Pessy (Spain), Universum had granted the exclusive option to host the fights of the Spanish challenger in case he wins. Campillo won this title bout and was crowned the new WBA light heavyweight world champion.

Campillo had recently announced that he would defend his WBA title on August 15 in Kazakhstan against Beibut Shumenov but this was a violation of the exclusive option of Universum in hosting the fights. A claim of Universum was confirmed by a Spanish civil court that prohibits Campillo to do so.

With this court order a new alternative has been presented for Universum boxer Jürgen Brähmer in order to go after his big dream and become world champion. He could fight for the full WBA title on August 22 against Campillo as he currently is #1 WBA rated contender. A possible alternative has been accepted by the WBO that Brähmer could fight on the same day for the WBO Interims world championship against stable mate Aleksy Kuziemski. A decision about this situation will happen within the next days after a final check.

Yes, that was their official press release.  They might want to consider hiring better English translators.

However, according to Campillo's attorneys, the fight should be progressing as planned.  Per Boxingscene, Campillo never actually signed any agreements with Universum, and thus they don't have an option on him, even though he beat their fighter in an optional defense.  Furthermore, since they went to Spanish court, and Campillo is currently in Kazakhstan (and the fight is in Kazakhstan), the court that made the order doesn't actually have any jurisdiction to stop the fight.  On the other hand, if he loses, Campillo may be forced to give part or all of his purse from the fight to Universum once he gets back to Spain.  Keep an eye on this one, as it may potentially turn into a long, protracted mess.