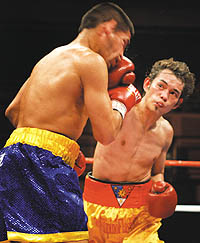 Nonito Donaire beat Rafael Concepcion by unanimous decision to win an interim paper super flyweight title.  Concepcion tried to keep things entertaining, backing up Donaire through most of the fight, and lunging in and occasionally finding Donaire with a fairly effective right hook.  While Donaire Did start off by coming forward occasionally, starting around round 5, he became content to mostly circle backwards and let Concepcion come at him, popping off counters and the occasional jab to earn a close but clear victory.  The judges scored the bout 115-113, 116-112 and 117-111; Bad Left Hook's official scorecard was 116-112 in favor of Donaire.  It wasn't exactly a performance that justified Donaire being ranked ahead of guys like Paul Williams and Chad Dawson in the pound for pound ratings, and Donaire seemed to take a step back technically, failing to throw his jab in circunstances where using it may have allowed him to completely control the fight.  Word is that this is just a stop on Donaire's way to 118, where he'd like to fight Jorge Arce or Fernando Montiel, both Top Rank fighters.  Based on what I saw of Donaire last night, I'd say he'd have his hands very full with Montiel.

The strangest moment of the night came in the bout between Steven Luevano and Bernabe Concepcion.  For 6 2/3 rounds, Luevano and Concepcion put up an abominable stinker of a fight. It was basically the featherweight verson of Klitschko-Ibragimov - Luevano continually popped out range finding jabs (landing absolutely nothing) to keep Concepcion off of him, while Concepcion danced around on the outside, and maybe two of three times a round, would try to pop in and rip off a quick combo (mostly missing).  After seven rounds, the two fighters COMBINED to land 100 punches, and frankly, that seemed generous.  Finally, with about 15 seconds left in the 7th round, a fight broke out.  Concepcion lunged in and nailed Luevano, who then fired back, and the two exchanged bombs.  With about a second left in the round, Concepcion appeared to hurt Luevano with a right hook.  The bell then rang, and with Luevano looking hurt and the referee not stepping in quickly, Concepcion ripped off a 1-2 combo that knocked Luevano out.  It seemed to me that it was a bit of an acting job that Luevano stayed on the ground for 3 minutes, but it was clearly a legitimate knockdown punch.  With Luevano unable to continue, referee Jay Nady was forced to call a disqualification.  Shameful, shameful Bob Arum, after the fight, said he'd schedule a rematch "with both fighters getting a raise" in December.  Personally, I'd rather have sex with a sandpaper tube than watch those two go at it again.

Roy Jones put on a clinic against Jeff Lacy in his main event, forcing Lacy's corner to stop the fight after the 10th round.  All night, Jones was able to outquick Lacy, and much like in his fight with Omar Sheika, he actually looked a little bit like vintage Roy against a MUCH slower and pretty well shot opponent.  Next up, Jones will be facing Danny Green, who won a minor cruiserweight paper title on the undercard, in Australia for that cruiserweight title.  Green certainly has the ability to give Jones his closest fight in a long time, and if Jones beats Green, it would be his best win since 2003.

Other results after the jump.