Bernard and Roy: The Rematch That Will Never Be

Share All sharing options for: Bernard and Roy: The Rematch That Will Never Be

I received an email a few days ago that wondered why boxing fans continue to hold Bernard Hopkins in such high regard, but shoot down the idea of Roy Jones Jr. as a viable threat because of age. While you might think the explanation is very easy -- and in some ways it is -- I found that a deeper probing into my own thoughts on Hopkins and Jones made me question things just a little bit.

I also found myself wondering if I would still be interested in a long-awaited (probably even overcooked) rematch between the two living legends, and recent news has brought that up once more.

For anyone that hasn't heard yet, Jones and Hopkins were on the phone together for a radio show, doing their usual song-and-dance (i.e., "60-40 me," says B-Hop, and "60 to the winner, 40 to the loser," counters Jones) before Hopkins hung up on the call.

Hopkins, 44, and Jones, 40, are both going to the Hall of Fame. In fact, if one of them didn't make it, I would get 500 internet soapboxes and not shut up until it was done. And to quickly answer my own question: Yes, I would be very interested in a rematch between the two, even now, even well past that fight's expiration date.

But why is it that we still laud Hopkins while begging Roy to retire?

I don't think it's really so simple as Hopkins still beating good fighters, or even how dominant he was over Kelly Pavlik last year. Let's face it, even if you love Roy and loathe Bernard: Hopkins was always going to age better. He didn't rely on youthful, ungodly reflexes like Roy did, and he was nowhere near the pure athlete that Jones was, and Jones may be flat-out the best pure athlete in the history of professional boxing, bar none.

Comparing their recent records makes it appear that Hopkins is obviously the superior fighter at this stage, and I'm not here to question that. You cannot compare what Jones has done recently to what Bernard has done. Hopkins is clearly the guy that deserves top five, top 10 pound-for-pound talk, while Jones belongs nowhere near the list.

Since Roy's disastrous three-fight losing streak against Antonio Tarver (twice) and Glen Johnson in 2004-05, Jones has gone 5-1, but it's hard to give him great credit for that record. The one loss came in a brutal landslide to Joe Calzaghe, easily and clearly the best fighter he's faced in that time. His best win? It really might've been a shot Jeff Lacy. Even if that wasn't the best opponent, I believe that's the fight where Roy looked the best he's looked in years; physically, mentally, everything. He looked sharp. 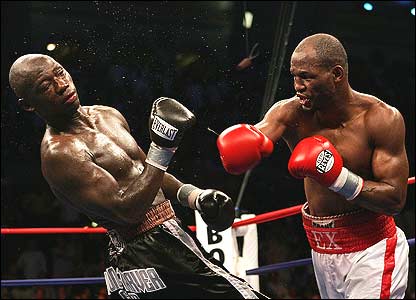 It may also be easy to forget now how impressive it was that former middleweight champ Hopkins made the leap to 175 pounds and dismantled Tarver, the reigning and legit champion of the division at the time. But I also do think it's fair to look at that win in hindsight and ask, "What's Tarver done since then?" Nothing, really, besides two wide losses to Chad Dawson and a duck job with Danny Green.

And Winky? Winky went AWOL for almost two years and returned to get slaughtered by Paul Williams. Kelly Pavlik is giving ominous signs that the Hopkins fight ruined him, or that maybe he just wasn't the guy he was made out to be (a la Lacy with Calzaghe, perhaps).

The obvious comparison, really, is Joe Calzaghe. Who am I to say Roy wouldn't have beaten an overweight Wright, a potentially overhyped Pavlik that didn't carry the weight well, or maybe even the Tarver that was so sluggish he started claiming he was drugged?

So how did they do with Joe Cool? There are many that argue Hopkins deserved a win over Calzaghe. I am not one of them. I thought Calzaghe clearly beat Hopkins, outworking him, outhustling him, and just plain winning the rounds and thus the fight. It wasn't pretty by any means, but Hopkins fights rarely are.

Jones, of course, was beaten to a pulp by Calzaghe, and I had Roy winning only the first round (118-109 final card). My initial score for Calzaghe-Hopkins was 117-111 for Calzaghe, which was about as wide as it got. I found I was quite in the minority there, but even though I might give Bernard a round more upon a second viewing (which I did later), I still think he obviously lost the fight.

Hopkins has earned his spot, and Jones has not yet earned the climb out of the "hole" he's been placed in as far as general perception goes.

But then another question burns in my head: If they rematched, who would I pick?

That's not so cut-and-dry, in my opinion. Jones is still faster, still a better athlete, and Hopkins is unlikely to bully Roy the way he did Pavlik, or even Wright and Tarver to lesser degrees. Roy hides a savvy pro behind a lot of his boasting and glitz and flash. I don't think he gets into a dog fight with Hopkins or lets Bernard push him around on the inside.

And I think Hopkins knows that, too. Almost 17 years ago, Jones beat Hopkins. To this day, after everything they've done, I'd take Roy over Bernard, prime-versus-prime, every single time, at any weight. With the way Bernard just ducked out of even having a conversation about fighting Jones again, I think the ol' "Executioner" might not be so confident in even the current superiority over Jones that he's been assigned by the public.

It's somewhat unfortunate that we'll never find out.