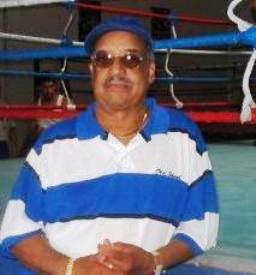 Juan Diaz's manager Willie Savannah spoke with BoxingScene.com's Rick Reeno about the scoring controversy that has dominated boxing news for the last few days, and the interview is such a total shuck-and-jive job that it made my head spin.

Before I get started here, let me clarify a few things:

Item One: Apparently, Willie wants to "take shots at factual errors going around"

"I see all these people writing about the Texas judges. [Raul] Caiz is from California and the other guy who I never heard of is from Oklahoma. There was only one Texas judge. The other two guys were out-of-state judges. We would have fought him with any judges, except three New York judges."

This ignores the problem and tries to get you to think you're wrong, and that Paulie is wrong. Malignaggi said before the fight that his problems included (but were not limited to):

In fact, how about we just quote a pre-fight Malignaggi:

"You have Gale Van Hoy, a judge from Texas who scored the Chris John-Rocky Juarez fight a draw. Then you have Raul Caiz, a Mexican judge from California who is anything but neutral. Looking at the fights Caiz has judged in the past, he is far from neutral when it comes to Golden Boy and Mexican fighters. The referee is Laurence Cole and all you have to do is look him up to see his past. Then they had a judge from Las Vegas, and we didn't have a problem with her, so they go and change the judge to some from Oklahoma that I've never even heard of."

Where is the great misunderstanding? We know what States the judges were from. Pointing out that they aren't all from Texas is a lame attempt at just plain not addressing the matter at hand. 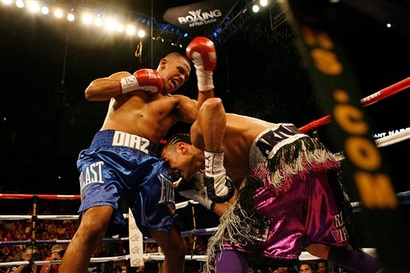 Again: It's not any problem with Diaz getting the W.

Interesting that he names the Katsidis fight, which I felt was damn near as big a blowout as the Freitas and Julio Diaz bouts for sure, but was scored 115-113 Katsidis but judge Glen Hamada. I wonder if Hamada was simply incompetent that night?

This is another attempt to simply avoid talking about this. He does not even address the fact that Gale Van Hoy's scorecard was absolutely not correct or even defensible. Yes, judging is a matter of opinion or taste to some degree, but nobody on earth besides Van Hoy thought this fight was 10-2 in terms of rounds for Diaz. He has been called out on this not just by Malignaggi and his supporters, but by Golden Boy chief Oscar de la Hoya and freaking Juan Diaz, for God's sake. Savannah, though, doesn't touch it.

Instead, he implies that those of us with the opinion that Malignaggi deserved the notch in his win column were having visions or the like, imagining that since Diaz wasn't winning easily, he must have been losing. So apparently in Willie Savannah's mind, the boxing public accepts only two things: Juan Diaz cruising or Juan Diaz losing. Sure, that's been his career up to this point, but believe it or not, I'm willing to give the boxing public enough credit to believe that even before this fight, we all imagined that Diaz could have possibly been in a tight, hotly-contested bout that he won on some peoples' cards, and lost on some others. Call me crazy.

Item Three: Home turf is only OK if it's your home turf

As you probably heard, Diaz, Golden Boy, Savannah, and everyone else associated with Juan want a fight with Ricky Hatton. I think it's a great fight and a great idea. But dig this:

"I don't know about fighting [Hatton] in the U.K., though. Juan Lazcano trained in my gym for that fight with Hatton. When he hurt Ricky, the referee called timeout. I don't know about fighting him out there. We would rather fight him in Las Vegas. He brings a lot of people over and he would probably bring over a lot more people than we would. ... [H]opefully we can do it in Las Vegas, and not in the U.K."

Willie's right about the Lazcano fight, which featured one of the most bizarre timeouts you'll ever see, as referee Howard John Foster called time so that a reeling, clearly hurting Hatton could get his shoe tied. It was Laurence Cole-level bad, in fact. It was blatant and it was crap. And the scoring in that fight (120-110, 120-108, 118-110 Hatton) was pretty questionable across the board, though the right guy did win (as was the case in Diaz-Malignaggi, some will argue).

But isn't it funny that Hatton apparently would get too much of a hometown advantage fighting Diaz in Manchester? His business arguments aren't really sound, either. First of all, Hatton-Diaz isn't going to bring over the fans the way that Hatton-Mayweather or Hatton-Pacquiao did. It's just not that big of a fight. Frankly, Ricky will never bring fans over to the States like that again, no matter who he fights. There was even a notable dropoff in Hatton support at the Pacquiao fight as compared to the Mayweather fight. That sort of phenomenal loyalty is probably out of the question for a fight with Juan Diaz.

Furthermore, Hatton-Diaz could probably sell out City of Manchester Stadium in Manchester, and that packs a whole hell of a lot more people than any boxing venue in Vegas. Even scaling out ticket prices, Hatton-Diaz in the U.K. makes more money than it does in the States.

He is right that Diaz wouldn't bring fans to the U.K., though.

"If we don't fight Hatton, we would have no problem fighting Paulie in a rematch, but our preference would be Ricky. I'll say one thing, there won't be a match in New York. Maybe it could happen in Las Vegas, but not in New York."

Yeah. There might be some home cooking to worry about in New York, huh?

I truly apologize if I happen to have offended Willie Savannah, because that is not my intention. Again, I understand he's simply doing his job, trying to get people talking about Hatton-Diaz and forgetting about the controversy from Saturday in Houston. I don't fault him for that. He's paid to keep his guy in the right light.

But when you read interviews like this, you can't help but think back to Paulie Malignaggi's five "Magic" words from Saturday: Boxing is full of s**t.