Gatti's second autopsy may contradict the findings of Brazilian authorities

Share All sharing options for: Gatti's second autopsy may contradict the findings of Brazilian authorities 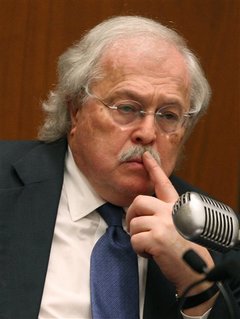 Michael Baden's been a busy man lately.  The famed forensic pathologist was called in for second opinions on the autopsies of David Carradine and Michael Jackson, and now he's been called in to consult on the second autopsy of Arturo Gatti as well.  This may all be well and good if the results of the new autopsy matched the results of the Brazilian autopsy, but it appears that there are some inconsistencies that Brazilian authorities did not mention in their report.  According to the Associated Press:

"The family [and pathologist's office] are waiting for results from the Brazilian police as to the scene of death and circumstances in Brazil before a final conclusion can be made," Baden said. "But the pathologists here [in Quebec] did a super job at finding things, including injuries, that were missed in Brazil."

Many of his friends and family have expressed disbelief at the suicide ruling, and Canadian Foreign Minister Lawrence Cannon said in a statement Friday that government officials will seek more information from Brazilian authorities.

Earlier this week, friends close to the Gatti family brought a computer to the Montreal police, claiming it had evidence of interest to his death. Montreal police have not searched the contents of the computer, and are making arrangements to have it sent to Brazilian authorities, Montreal police Constable Ian Lacoursiere said.

This story just gets stranger and stranger.  First, there were a number of injuries that pointed to homicide.  Then, there were somewhat contrived explanations as to why those injuries were there in the case of a suicide.  Now there may be even more injuries, and it seems almost silly that Brazilian police would have made a ruling without looking over all of the reported evidence.

Hopefully, for the sake of everyone involved, this strange matter can be laid to rest once and for all after this investigation is complete.

Update: Because the death was officially ruled a suicide, Amanda Rodrigues will be inheriting Gatti's estate.  The article also mentions that the Brazilian authorities didn't perform a full autopsy and never performed a toxicity screen, both of which are "unusual" for a homicide investigation.