Nate Campbell had vitreous hemmorhage; vision will clear up long-term

Share All sharing options for: Nate Campbell had vitreous hemmorhage; vision will clear up long-term 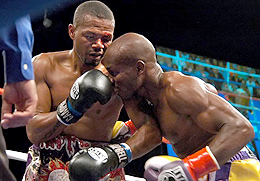 Yesterday, Nate Campbell made a post fight statement to Fightnews regarding the Timothy Bradley fight and the injury that caused impairment of his vision:

First of all, I want to let everyone know that I am OK. There is no permanent damage to my retina. I was taken from ringside to the hospital, and was treated for what they called a vitreous hemorrhage behind my left eye. The ophthalmologist that treated me at the hospital advised me that the impairment to the vision in my left eye should clear up completely within a few days to a week at most. Never in my career have I had an injury like this where I simply couldnt see out of an eye. I’ve had cuts 100 times worse than this that I fought through, and would have done the same in this instance, however this was something different. This was not something my cutman could have dealt with.

Campbell went on to say that within about 5 seconds after the major headbutt (when he started complaining to the referee), he started to have a big spot moving across his eye, where he could no longer see out of it.  He also said it wasn't the cut that was the problem, but the bleeding behind the eye.

I have little reason to doubt Campbell here.  Everything he's said in the statement is completely consistent with what he was saying on fight night, and I've seen him fight through some bad gashes before.

However, there is a question as to whether the fight actually would be called a no contest if the results are changed.  As usual, before the match, the commentators said the fight was under the Unified Rules, which would mean that a stoppage before the end of the fourth due to a clash of heads would result in a no contest.

However, under the California State Code of Regulations, the result is that the contest should be declared a draw:

If the referee and/or the ringside physician determine that the bout may not continue because of an injury suffered as the result of an unintentional foul or because of an injury inflicted by an unintentional foul which later becomes aggravated by fair blows, the bout must be declared a draw if the bout is stopped before the bell rings to begin the fourth round. After the bell rings to begin the fourth round, the outcome shall be determined by scoring the completed rounds and the round during which the referee or ringside physician stopped the bout.

For whatever it's worth, Toney-Rahman II also took place in California, and had a similar situation.  In the third round of the fight, Toney was bobbing and hit Rahman over the eye with his head.  Between rounds, the referee went to inspect Rahman, who said he wanted to stop the fight because of the cut.  The referee did stop the fight, declaring it a TKO victory for Toney.  Rahman appealed, and the CSAC changed it to a no contest.  The one big difference, however, is that in that fight, the referee had already acknowledged that the cut was due to a butt and not to a punch, whereas in this one the referee just plain blew the call.  The fact that it was human error rather than lack of knowledge of the rules by the referee may lead to a different result in this case.  As an aside, in his fight, Rahman was clearly just looking for an excuse to end the fight and leave with his dignity intact.  Campbell, on the other hand, seemed truly panicked that he couldn't see, and didn't seem to be looking for a way out simply because he was losing the fight, but more because he couldn't tell what the heck was going on.

Hopefully the Commission makes right by this one.  Whether or not Campbell was "looking for a way out", the reason he was looking for a way out was because of a serious injury caused by an accidental butt.  Had he continued, he could have suffered permanent eye damage, ending his career.  There shouldn't be any shame in quitting if your health is in serious danger, and the rules are the rules.  Even the referee admitted after the fight that there was a headbutt, just that he thought the injuries were caused by a subsequent punch (which, on replay, clearly hit nowhere the injured area).  Note that under California law, quoted above, it's still the same result if the injury "later becomes aggrevated by fair blows."  Whether it's changed to a no contest or a draw, this one shouldn't go down as a loss on Nate Campbell's record.