Share All sharing options for: Guzman - Funeka may round out Mayweather-Marquez card 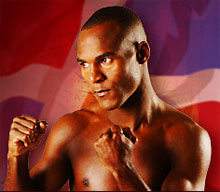 Last week, Joan Guzman, the undefeated Dominican fighter, after over a year of inactivity, signed with Golden Boy Promotions.  It looks like that deal might already be paying dividends.  According to multiple sources, Joan Guzman will be fighting Ali Funeka for the vacant IBF lightweight title.

This is a title Guzman was supposed to fight for a while back against Nate Campbell, but Guzman couldn't make weight, and even though Campbell was willing to still take the fight with Guzman over weight, Guzman refused, resulting in the cancellation of the fight.  The fight being cancelled resulted in Guzman being denied a different title shot at 140, as well as Campbell needing to declare bankruptcy.  Funeka, on the other hand, recently fought for this title, but was re-installed by the IBF as a high contender after a close fight with Nate Campbell, in which Campbell himself had to vacate his belts on the scale because he couldn't make weight. Of course, all of this happens after both Yuri Romanov and Fernando Angulo, who were supposed to fight for this title on the undercard of Darchinyan-Agbeko, were disqualified from contending for the title for other reasons.

Possibly more interesting is that Golden Boy is targeting a September 19 fight date, which would put the fight on the Mayweather-Marquez undercard.  This would completely load up the undercard, and make it one of the best undercards, on paper, of the decade.  Already scheduled for the card are the rematch of Rocky Juarez vs. Chris John and Zab Judah vs. Antonio Diaz, a replacement for Matthew Hatton after a dispute over catchweight.