Mayweather-Pacquiao "is off" according to Arum

Share All sharing options for: Mayweather-Pacquiao "is off" according to Arum 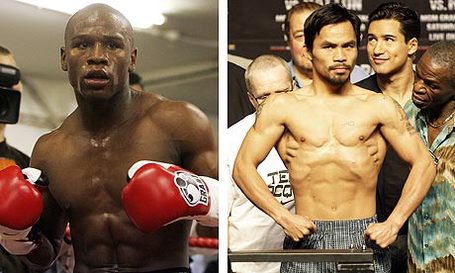 The proposed March 13 fight between Manny Pacquiao and Floyd Mayweather Jr. is off, according to Bob Arum, and we're probably too late in the game for anything to change. Dan Rafael of ESPN.com has the following:

"The fight's off," Arum, who promotes Pacquiao, said from Las Vegas.

The fight died after a last-ditch attempt at mediation failed in an effort to determine the drug testing protocol.

Pacquiao had agreed to move off his hard-line stance of refusing a blood test inside 30 days before the fight, but Mayweather wouldn't budge off his desire for random testing all the way until the fight, Arum said. Nor would Mayweather agree to a public apology for remarks he made accusing Pacquiao of using performance-enhancing drugs, Arum said.

I'll open up tomorrow. I promise. Right now, I have nothing to say. I'll now prepare for Mayweather-Malignaggi on March 13 followed by Foreman-Pacquiao on March 20, and while I'll pay for those shows due to being a big boxing fan that genuinely enjoys providing coverage for those smart enough to not pay for crap, I'm in no way happy about it.

Tomorrow afternoon, I'm going to fully weigh in on this. My opinion may mean nothing to you, but if it means even a tenth of an ounce, I'll promise now that I'll share my full thoughts. They favor neither side, and they forgive neither side. I truly hate this on every level, and I think it puts a massive dent in the credibility of boxing as a competitive sport.