Those Darn Heavyweights: What's On Tap for the Big Boys

Share All sharing options for: Those Darn Heavyweights: What's On Tap for the Big Boys 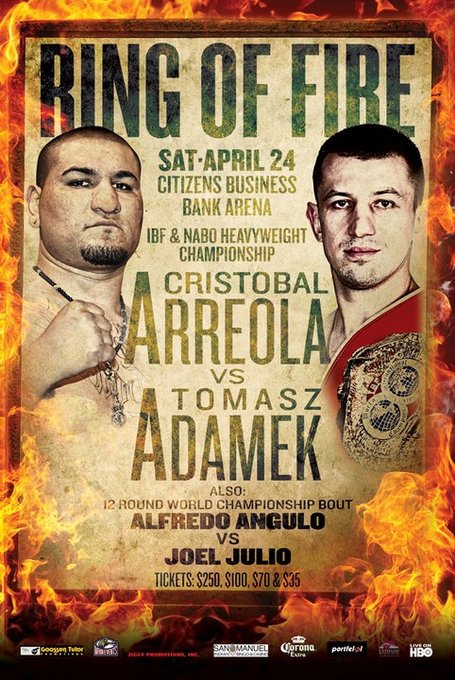 With boxing just about to really kick into full swing for 2010, I'm checking my watch every other day or so for the time someone at ESPN, Fox Sports, Yahoo! Sports, Comedy Central, ET Online or the famed site Old Man Who Used to Like Marciano and Hasn't Seen Boxing in 11 Years to chime in and notice, "HEY!"

"You know what would help?!"

"With heavyweights, yada yada, Marciano and Louis and Ali and Frazier and Foreman and Holmes and Tyson and Jersey Joe and I guess Holyfield, too, why not?!"

For those who might not pay close attention, here are some notable heavyweight fights coming your way. I figure after Pacquiao-Clottey one of those "Hey! The heavyweight division is dead!" articles will pop up, so let's burn this out now.

The night before the big Pacquiao-Clottey show in Arlington, Top Rank will put an appetizer onto the table about a half hour up the road at the Gaylord Hotel in Grapevine. Sam Peter is still best-known for knocking down Wladimir Klitschko three times in a 2005 loss, and has in a lot of ways become a hype job because of that performance, despite the constant harping on Klitschko for having a glass jaw that follows the world champion around to this day. If Klitschko's chin is so bad, what's the big deal about Peter knocking him down?

That was the last time Wladimir looked so much as vulnerable, too. Since then, Peter has stopped four guys, and three of them were bums. The fourth, Oleg Maskaev, was stopped in under two minutes by Nagy Aguilera in his last fight. Oleg, for the record, recently said he plans to box on at age 41, and considering how giddy the WBC has proven to be to hand him mandatory challenger positions before, why not, I suppose.

Anyway, this could be a decent sleeper fight if all goes right. Since signing with Top Rank after losing two straight to Vitali Klitschko and Eddie Chambers, Peter has been slowly rebuilding his career. He's run over Marcus McGee, Ronald Bellamy and the free-moving land mass that is Gabe Brown in his last three. Though not a world-beater, Aguilera could be a fair step back up the ladder in terms of competition.

Most likely, though, he isn't, and Peter will blast him out without much trouble. Aguilera's only credible win is over Maskaev, who is really old and never took a punch all that well, and was caught cold.

Here we have the recognized world heavyweight champion, a dominant specimen who has hardly lost a moment of his last eight fights taking on the best American heavyweight there is today. Philadelphia's "Fast" Eddie Chambers has often heard that he should fight at cruiserweight, but if you ask the average American male what a cruiserweight is, you're probably going to hear about Rey Misterio Jr. 15 times before someone mentions what Evander Holyfield was doing before he was a heavyweight. There is no American money in the cruiserweight division. Chambers knows that. It's why he fights at heavyweight.

After a frustrating-to-watch loss to heralded Russian Alexander Povetkin in 2008, Chambers went back to square one and beat a few guys everyone knew he would beat, working out some kinks, trying new training methods, all that stuff. In his last two fights, he's decisioned Samuel Peter, and then in the best performance of his career, dominated previously-unbeaten Alexander Dimitrenko on hostile ground in Germany.

He returns to Germany to face Klitschko in a week and a half. And once again, here we have the man generally regarded as the world's best heavyweight, the reigning world champion, taking on the best American challenger there is ... and not a single, solitary U.S. TV network cares.

Not one. HBO passed, Showtime passed, ESPN passed, Versus passed. The Klitschkos hate pay-per-view, so instead of offering the bout through a reliable carrier like Integrated Sports, a company that specializes in fights like this that just can't find a TV home but deserve to, K2 Promotions has decided to put it on the internet for $15 at Klitschko.com.

If this doesn't signal that the time of the heavyweights is fully accepted as having passed its expiration date, what could?

Here's the quick lowdown on this one. Solis is a dynamite fighter, a celebrated Cuban amateur who has stormed through 15 opponents as a pro. No one's really sure if he gives a crap about being a pro boxer or not, but thus far that hasn't hurt him. Drumond, a 35-year-old Costa Rican, has lost his last two in blowout fashion to Ruslan Chagaev and Derric Rossy. Solis will moida him.

I'm a broken record on this, but I like this fight a lot. John Ruiz takes an incredible amount of flak, but outside of his years of being a terribly boring, sometimes offensive-to-watch, snooze-inducing galoot, he's kind of a representation of everything that goes opposite of what the division has been criticized for since Lennox Lewis retired.

Ruiz works hard. When he complains, he has a point. He'll fight anyone. He's never ducked anyone. Dogs and children like him. He has a game room. For the most part, I really like John Ruiz.

Now 38, Ruiz is stepping up to take another crack at a heavyweight title, as the WBA tries to wrest their precious away from David Haye, who is threatening to put on fights anyone cares about instead of that Ruiz-Chagaev-Nikolai Valuev triangle of terror the organization has held so dear, with only the occasional empty gesture toward Kali Meehan meant to interfere. I've said plenty that I think Ruiz has a genuine shot at upsetting Haye and taking the belt home with him, but that doesn't mean I think he actually will.

I also want to repeat myself on another point when it comes to this fight. The world's four heavyweight titles and the Ring Magazine world championship are split between Haye (WBA), Vitali Klitschko (WBC) and Wladimir Klitschko (Ring, WBO, IBF). All of them stay in great shape year-round. It's not a coincidence.

Not content to peak with the 86 years of light heavyweight in Las Vegas on April 3, the Nevada State Athletic has given Evander Holyfield a new license so that 88 years of heavyweight can square off seven days later. This fight was "supposed to" take place in Uganda, which was announced in November. Anyone who had paid a shred of attention to anything to do with Holyfield in the last five years knew that wasn't going to happen, and shockingly it did not. But now apparently it's actually going to happen in Vegas. I hope the NSAC men and women that approved this sleep well at night.

Big Hype for This Fight: Holyfield hasn't fought since being robbed against Valuev in December 2008 in one of the all-time worst heavyweight title fights on this planet, and Botha is coming off of what he describes as a career-worst performance in an eight-round draw against Cuban Pedro Carrion. Who's excited?!

We've talked plenty about this one already, but seriously. If you're reading this mostly out of boredom or on a whim, don't really follow boxing much, and you've gotten this far, this is the fight in this article that you need to see. Every time we say a heavyweight fight will be good, it isn't, but seriously, this one will be good. I promise! I can't promise. It might stink. Adamek might hide for 12 rounds while Arreola clumsily lumbers after him. I don't know. But chances are they're coming to inflict damage and get into the title hunt. Outside of one of the two of these guys fighting David Haye, this is the most exciting fight this division can offer.

I really have nothing but admiration for the 38-year-old Vitali Klitschko, but unless something major happens before he retires in the near future, I'm always going to unfairly remember this terrific comeback run of his for his God awful fight with Kevin Johnson in December. And none of it was his fault, either. That fight being that bad was 100% on Kevin "Cowardly Lion" Johnson, who leaned, gabbed, ducked, dodged, ran, and yakked for 36 minutes, driving his corner crazy and driving spectators to drink.

It was almost as if Vitali had sat on the sidelines watching travesties like Valuev's fights and his brother's mind-numbing "fight" with Sultan Ibragimov, and he responded with a big, "Oh yeah?! Watch this!"

As for this fight with Sosnowski, I'll let Brickhaus sum it up:

"That's just an awful fight. This shouldn’t go longer than 4 rounds. I guess at least he'll get money from Polsat this way. This is seriously a sorry, sorry matchup. This is worse than fighting Ray Austin or Alexander Dimitrenko or 47 year old Evander Holyfield."

Our own Ted Sares offered disbelief as well, since Sosnowski was nearly knocked out by Zuri Lawrence (24-15-4, 0 KO) in a pretty recent fight.

As for me, I'll add this gem: This fight sucks, and everyone involved knows it.

I hope you're excited for the whirlwind schedule of heavyweight fights!