Share All sharing options for: TV and Internet Fight Schedule - Weekend of March 26 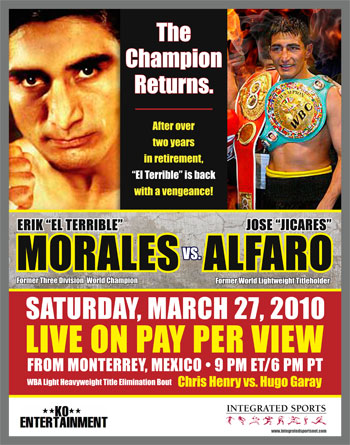 Even with the cancellation of ESPN's Friday Night Fights card that would have featured two more title bouts, this is easily the most stacked weekend of the year so far.  While there is no single fight that will shake the world of boxing at its core, there are a baker's dozen of title bouts and eliminators going on Saturday.

FSN, 11:00 p.m. Eastern, Abner Mares vs. Felipe Almanza.  Mares has been out of action for a long time, so this fight is intended to be a tune up for his title shot against Yohnny Perez on the Vazquez-Marquez IV undercard.  This is another of Golden Boy's Fight Night Club series, so expect Ronny Rios, Derrick Wilson and company to make appearances.

Super Channel (Canada), 11:00 p.m. Eastern, Demetrius Hopkins vs. Freddie Norwood.  Hopkins has been inactive since losing to Kendall Holt (and getting tied up with promotional issues) over a year ago.  Norwood's record looks okay until you realize he's a 40-year old who peaked at featherweight and lost two of his last three, with this fight being contested at welterweight.  The Chudinov brothers will also fight on the undercard.  This card will also be syndicated in the U.S. down the line, and will probably break up MSG's marathon of John Duddy's greatest hits.

Sky Sports (UK), 6:00 p.m. Eastern, Matthew Hatton vs. Gianluca Branco, Anthony Small vs. Sam Webb, Yassine El Maachi vs. Badru Lusambya.  Hatton and Branco will face off for the European welterweight title. Small will attempt to make the second defense of his Lonsdale belt, or to bore us to sleep trying.  El Maachi is a more interesting story.  He's 11-4 and 30 years old, but clearly has some talent, and claims his losses were fights he was asked to throw by shady management.  All of those losses have come to decent British or Euro level fighters as well.  He found 21-1 Lusambya as an opponent by publicly announcing he would give 15,000 pounds to whoever would fight him, claiming that everyone in England was ducking him.  African light middleweight champ Lusambya answered that call.  However, with Hatton-Branco as a late addition to the card, it's possible that the El Maachi fight won't be televised, unless one of the two main fights shockingly ends before the judges read scorecards. Bad Left Hook will have live round-by-round coverage.

Gofightlive.tv, 8 p.m. Eastern (price TBD), Terrance Cauthen vs. Isam Khalil, Omar Sheika vs. Garrett WIlson, Ahmed Kaddour vs. Jerome Ellis.  It's crazy to think that once upon a time Cauthen was a hyped prospect coming off winning a bronze medal.  Now he's in the twilight of his career, but still making a living as a decent regional level fighter.  Sheika's best days are long gone, but with the dearth of name fighters at 175, he could probably still get a few more decent fights just by continuing to fight.  Kaddour fought on the first season of The Contender (or, as stated on the fight poster, "the MBC Contendor Show"), and is making a comeback after a three-year retirement.

TBS (Japan), 6:00 am Eastern, Koki Kameda vs. Pongsaklek Wonjongkam, Oleydong Sithsamerchai vs. Yasutaka Kuroki.  Kameda and Wonjongkam will be fighting for the Ring flyweight title for the first time since Ring Magazine reinstated having champions.  Oddly, Kameda should already be lineal titlist, as Flyweight easily has the longest current lineage, tracing all the way back to Miguel Canto creating the lineage back in 1975.   Sithsamerchai will be attempting the fifth defense of his minimumweight title against Kuroki, who hasn't lost since 2004 but remains unproven. Bad Left Hook will likely have live round-by-round coverage.

SAT.1 (Germany), 5:20 p.m. Eastern, Yuriorkis Gamboa vs. Jonathan Barros, Juan Carlos Gomez vs. Alexey Mazikin, Steffen Kretschmann vs. Denis Bakhtov.  This is the first of a monthly series that Arena Box will be running on SAT 1.  Barros is 28-0-1, but has been fighting mostly substandard competition in Argentina.  He looks like a decent enough boxer, but this is meant to be a showcase.  Gomez will be fighting for the first time since getting beaten down by Vitali Klitschko.  Mazikin is a stiff who Odlanier Solis beat in his second pro fight.  In their previous matchup, Bakhtov scored a somewhat flukey first round knockout over previously undefeated Kretschmann.

Meridiana (Venezuela), RPC (Panama), 9:00 p.m. Eastern, Aneslmo Moreno vs. Nehomar Cermeno, Jorge Linares vs. Francisco Lorenzo.  The main event matches up #2 against #6 in the bantamweight division, but this fight is getting very little play at all.  The horrendously mismanaged Moreno now gets to attempt his seventh title defense on his mandatory's home soil.  Despite holding the belt, Moreno has been a road warrior.  Linares will attempt to bounce back from his shocking knockout loss at the hands of Juan Carlos Salgado.  He's facing Lorenzo, the guy who faked his way to a DQ win against Humberto Soto.

Integrated PPV, 9:00 p.m. Eastern ($29.95), Erik Morales vs. Jose Alfaro, Hugo Garay vs. Chris Henry, Denver Cuello vs. Juan Hernandez, David Rodriguez vs. Daniel Bispo.  The last time we saw El Terrible, he was getting beaten by David Diaz, who by now we know isn't much better than a journeyman.  In the first stop of his comeback, Morales will take on Jose Alfaro at the welterweight class.  Fortunately for Morales, Alfaro normally fights at 135.  Garay-Henry is a pretty even match on paper between two guys who like to bang, and is an eliminator for the title currently held by Beibut Shumenov.  Although I haven't seen an official announcement that Chocolatito is out, it appears that the originally scheduled bout between Roman Gonzalez has been replaced by Denver Cuello to face Juan Hernandez.  The press materials say that David Rodriguez is "the heavyweight division's best kept secret," but here's a secret - he's not.  For those of you near the Mexican border, this one will also be airing for free on Televisa.

Fox Sports Espanol, 9:00 p.m. Eastern, Ulises Solis vs. Bert Batawang.  This is an IBF light flyweight eliminator.  The two fought over a two years ago, with Solis winning a 9th round TKO.  Note that this one is on Fox Sports Espanol only, and not on FSN.

Showtime, 10:30 p.m. Eastern, Arthur Abraham vs. Andre Dirrell.  The German telecast (on ARD) will also air one undercard bout featuring Dominik Britsch. Bad Left Hook will have live round-by-round coverage.  For those of you who don't subscribe to Showtime, Showtime will be free this weekend.

HBO, 10:30 p.m. Eastern, Marcos Maidana vs. Victor Cayo, Ali Funeka vs. Joan Guzman II.  Maidana will be putting his interim 140 pound title on the line against Cayo, a somewhat wild boxer who often leaves his hands down and fights like a less talented Roy Jones.  The winner will be the mandatory for Amir Khan, although if Maidana wins, expect the parties involved to continue "building" the fight while Khan continues to learn how to defend himself from a huge wild puncher like El Chino.  Funeka and Guzman will be recontesting a controversial draw from a fight that Funeka appeared to clearly win.  Guzman, as usual, claims he didn't have enough time to train and thus came in weight drained, and says you should expect him to look more like his old self for this one.  The winner will earn a vacant title and need to make his first defense against Rolando Reyes.

TSN (Canada), 10:30 p.m. Eastern, Steve Molitor vs. Takalani Ndlovu, Grzegorz Kielsa vs. Neven Pajkic.  A few years ago, Molitor scored a dominant ninth round TKO over Ndlovu to retain a super bantamweight title.  This time, the two fight again for a vacant super bantamweight title.  Ndlovu isn't a bad fighter, and Molitor doesn't look the same since he lost to Celestino Caballero, so maybe this one will be more competitive.  11-0 Kielsa defends his Canadian heavyweight title against 11-0 Pajkic in a bout between two older 'prospects' who probably are coming in too late to make noise at the world level.  Kielsa is better known, but Pajkic has the better scalps.