Share All sharing options for: Fight Previews: Kameda-Wonjongkam and Moreno-Cermeno

Kameda (22-0, 14 KO) is maybe Japan's best boxer, with only long-standing bantamweight titlist Hozumi Hasegawa having the other argument, at least in my estimation. But the young Kameda is a different sort of animal. He has great skill, but also a mean streak and a personality that could cross over enough to make him a worldwide star.

And at just 23, he's only beginning to reach his peak, or at least that would be the hope. In his last bout, Kameda and family rival Daisuke Naito met on November 29, one of the biggest fights of 2009. The two drew a very big crowd and enormous TV ratings in Japan. And when the smoke had cleared, the young, brash Kameda had emerged as a true titlist and more than the hype-job that some had accused him of being. He beat the established veteran Naito via clear decision.

Now, Kameda is faced with Naito's greatest rival, the Thai star Pongsaklek Wonjongkam (74-3-1, 39 KO). While Pongsaklek has a manufactured record in some respects, as most of the Thai fighters do, he's also proven himself against the world's best more than enough that you can't accuse him of being some sort of pretender. He won the WBC flyweight title in 2001, and held it until 2007, when he finally lost to Naito in the third of their four fights. (In the fourth, they drew. Currently, Pong leads the series 2-1-1.)

What may be worrisome for the veteran is that at 32, he's getting a bit long in the tooth for a flyweight. Also, that Kameda is young, fast, confident (and now, rightfully so), and very good. Pong is still a good fighter last anyone knew -- he drew Naito, and then after four sham mismatches, beat Julio Cesar Miranda on a wide decision, which netted him the (pointless) interim WBC belt, which he defended once against Takahisa Masuda. He last fought in December, against a scrub.

I like Kameda here because of his obvious advantages: he's younger, fresher, has way less miles on him, will have home field in Tokyo (though Pong is no stranger to Japan), stronger, and honestly I think he's just a better fighter right now. But if Pong scores the minor upset, it'd be a huge feather in his cap, and one that strengthens his case for Hall of Fame status someday. I think we'll end up seeing the controlled Kameda who was just too good for Naito, and will be too good for Pong, too. Kameda UD-12

The undercard will feature another Thailand-Japan fight, as WBC strawweight titlist Oleydong Sithsamerchai (33-0, 12 KO) defends against Yasutaka Kuroki (23-3-1, 15 KO). I'll take Sithsamerchai by wide decision in that one. 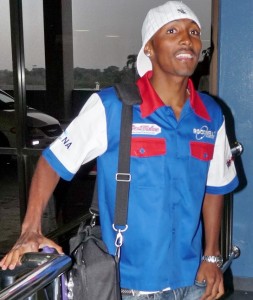 At this point, Moreno (28-1-1, 10 KO) has a great case to claim he's the world's most underrated boxer. This fight is between two top ten (or maybe even top five) bantamweights, and it's gotten almost no coverage.

In 2008, the Panamanian went to Germany and decisioned Wladimir Sidorenko to win the WBA title. He defended it at home against Cecilio Santos and Rolly Matsushita -- not the greatest challengers, but it would get better.

Now, he goes to Venezuela to face Cermeno (19-0, 11 KO), who has been red-hot. Cermeno won two fights against Cristian Mijares, the first one disputed but the second one leaving no doubt who won. In December, he knocked out Alejandro Valdez in the 11th round. That's three straight very good wins for the 30-year-old.

It may seem odd that Moreno fights so frequently on the ground of others. Making it even weirder this time is the fact that Cermeno actually lives in Panama now.

This is a pick'em fight on paper, but when I look at the recent wins of both, I favor Moreno's schedule. I'm not trying to say Mijares was never good, but his status was largely built on a destruction of Jorge Arce, who was wearing out then, still can't fight southpaws worth a damn, and hasn't done anything much since. I never really bought into him as the P4P top ten guy some did, and was one of the very few that thought Vic Darchinyan was going to tear him up, which of course Darchinyan did.

So while Cermeno is indeed hot and a very good challenger on paper, I can't say I'm totally sold. Moreno's two decision wins in Germany over Sidorenko are damn near a miracle, on the other hand. I'll go with the titlist, but this is one of the best fights of the weekend. Moreno UD-12

On this show's undercard, Jorge Linares looks to get back in the game (if you really think he's out, which I do not) by likely demolishing Francisco Lorenzo, the guy who acted his way into that hideous DQ "win" over Humberto Soto, when Soto broke his nose something fierce. Give me Linares by brutality.