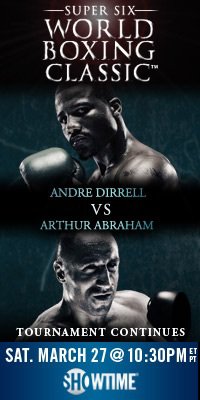 Note: This is Showtime's free preview weekend for most carriers, so if you don't regularly carry Showtime as part of your cable or satellite bill, you should have it this weekend.

The Super Six World Boxing Classic has thus far had its share of hiccups, which was probably to be expected. Any idea this revolutionary and wildly ambitious was bound to be affected by the fact that boxing is, after all, boxing. Getting this many legit contenders and their high-profile promoters together was always going to be a hassle at some point.

This fight didn't escape boxing being boxing. Scheduled for March 6 in California originally, it has moved three weeks and into the boxing-dead city of Detroit. The original setup, with this fight paired with a Vic Darchinyan bout, promised to fill a building. That's three strong names to draw the boxing diehards, plus the Armenian population out there for Abraham and Darchinyan figured to get a good amount of folks in.

Now at the Joe Louis Arena, we'll see if Dirrell has any drawing power at all in Michigan. A Flint native, Dirrell has barely fought in Michigan, because there just isn't much boxing here in the Great Lakes State. And Detroit is hardly an attractive tourist city.

But forget the politics and the business. Right now, let's just talk about the fight, because it's almost upon us.

In Stage One, Abraham fought on his home turf in Germany and knocked Jermain Taylor out of the tournament with a 12th round right hand that put the former middleweight champion on Dream Street, and maybe out of boxing altogether. Dirrell went to Nottingham and lost a highly controversial decision to Carl Froch in an ugly fight. Right now, Abraham leads the round robin with three points, and Dirrell has zero, of course.

A win for Abraham here all but completely assures him of a berth in the single-elimination part of the tournament, where the top four fighters move forward and the bottom two are left out. Andre Dirrell needs this win, and he knows it.

But mentally, who is Andre Dirrell? The skill is there. He's got that in spades. But what about the heart? I don't like to question "heart," really, because while I don't go mad for this warrior/Spartan/gladiator stuff, these guys are all brave enough to get in there. So it's relative. So relatively, does Dirrell have great heart?

Right now, I think you could say no. On Dirrell's worst days, he's outright unwatchable. The Froch fight was hideous, and only second on his list of offenses to his deplorable "fight" with Curtis Stevens, which Harold Lederman at ringside called (I'm paraphrasing) "the worst performance I ever saw."

Abraham is almost mythical at this point. Pure strength, he's top of the line. He has brutal power. There's nothing flashy about him, but he can turn lights out fast, sort of like Wladimir Klitschko. Both have one-punch power, and you know it, but they can almost lull you into forgetting that every fight. Then suddenly, BAM! And it's over.

BAM! is different than BANG! BANG BANG! Manny Pacquiao has power, too, but not like this.

There is plenty of talk about Dirrell having a legit shot at the upset, and yes he has the tools to do it physically. He's much faster than Abraham, he's taller than him, longer than him, he's more dynamic. But Abraham, simple as it is, does what he does tremendously well. Dirrell does what he does really well in spurts, and sometimes he just runs and tries to avoid contact as much as possible. He's not Floyd Mayweather, who does what Dirrell seems like he wants to do. Abraham is about as good as it gets with the peek-a-boo defense and filthy punching power. When he gets locked in and sees an opening, he rarely fails to take full advantage of it.

There's a part of me that would like to say I can see the upset happening, but I really can't. I don't think Dirrell has the mindset to take the risks necessary to beat Abraham, and with the Super Six's neutral judges, I don't think Arthur will be fighting the uphill battle on the cards that some expect. King Arthur will reign still on Saturday night, and I think he stops Andre, too. Abraham TKO-10