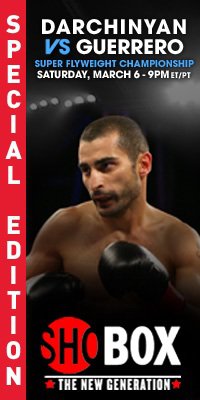 Without question, Saturday night's special edition of ShoBox: The Next Generation was not exactly what Showtime had in mind for March 6.

Instead, Dirrell pulled out with a reported back injury, re-scheduling for three weeks later in Detroit. So Showtime had a decision. They could cancel the entire card, or go ahead with Darchinyan. They chose the latter, keeping fighters getting their paydays and Showtime exposure, though now on a smaller show.

Well...it's not the best main event, and no one is going to argue that it is. Darchinyan is an enormous favorite over the unknown Guerrero, a Mexican southpaw who does have wins over Luis Maldonado and Juan Alberto Rosas. Of course, Darchinyan also beat Maldonado back when Maldonado was better than he is now, and Rosas has had trouble in steps up before. And past Maldonado and Rosas, the W-L-D record of Guerrero's opponents coming into fights with him is just 35-37-3.

The only X-factor here is age. Darchinyan, at 34, is getting old for a small fighter. But outside of a perhaps ill-advised step up to 118 pounds and a poor gameplan last year against Joseph Agbeko, Darchinyan has been thoroughly dominant again since his 2007 loss to Nonito Donaire. Since that time, he has blasted Federico Catubay, Dmitri Kirilov, Cristian Mijares, Jorge Arce and Tomas Rojas. And the southpaw stance of Guerrero wouldn't seem to be an issue -- both Mijares and Rojas are lefties.

Rojas was Darchinyan's last bout in December, and looked OK in the opening round before being brutally knocked out in the second.

Put simply, this is Darchinyan's fight to lose, and a Guerrero win would be a big early front-runner for Upset of the Year. Keep in mind this was not scheduled so much to be a competitive challenge for Vic, but a stay-busy fight for the "Raging Bull," and a helper for promoter Gary Shaw in drawing a good house in California. In that role, the fight made a lot of sense.

I wouldn't expect much of a fight. Darchinyan TKO-5

This is the real attraction for hardcore American fight fans on Saturday, I think. Zappavigna -- aka "Lenny Zappa" -- is an Aussie brawler who has garnered a lot of hype in Oz. He made his American debut off-TV on the December 12 Showtime undercard, shutting out journeyman Sergio Macias (14-20-1, 6 KO) over six rounds. Angulo usually makes for a good fight, and this one has fireworks to spare on paper.

I'm not going to make a pick because I haven't seen enough of Zappavigna to do so, but here's a 5-minute highlight reel for Zappavigna (song NSFW, probably):