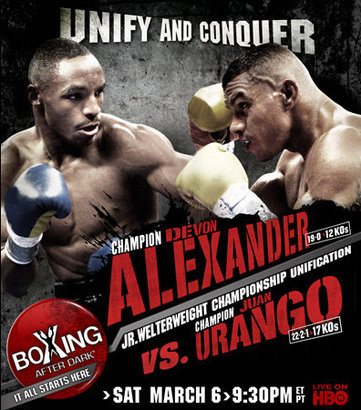 HBO had one fight card in January, and then the boxing department went dark for the entire month of February. Saving up for the big fights can be deadly dull for the fans, who sit and twiddle their thumbs in anticipation of what's coming, especially if the empty month is February, which is an awful sports month to begin with.

Now they return with a Boxing After Dark on Saturday, a card that has been gutted and left standing with just one fight worth being televised, a 140-pound unification bout between titlists Devon Alexander and Juan Urango. Odds are pretty heavily in favor of Alexander, a flashy, exceptionally quick fighter who goes in against a lumbering bulldozer who has only one speed.

Alexander, 23, and Urango, 29, meet at the Mohegan Sun in Uncasville, Connecticut, in front of what you might rightly expect won't be much of a crowd. St. Louis native Alexander has yet to spread his wings outside of the Gateway City, and Urango is a Colombian based in Florida, where 10 of his last 13 fights have taken place.

In Alexander's favor is speed and natural ability. This is a young fighter with huge upside, the kind of guy who can really turn heads with his quickness and style. He's been handled with kid gloves since beating DeMarcus Corley and Miguel Callist in 2008, finally stepping up last year to face and defeat Junior Witter for the vacant WBC title. Witter quit after eight, claiming a hand injury.

Urango is a bit more familiar to the avid TV boxing fan. In January 2007, he challenged Ricky Hatton at the Palms in Las Vegas, and despite being routed, got some publicity for being a guy that Hatton simply could not back down. Whatever you think of Ricky Hatton as a fighter, there's no questioning that the guy can do more than just crack an egg with his power, but he barely put a dent in Urango, who lumbered forward all night and just found himself outboxed by a better fighter.

He won two fights before facing Carlos Wilfredo Vilches on ESPN2 in April 2008, scoring a highlight reel fourth round knockout with a right hook. Nine months later, he went to Montreal and beat Herman Ngoudjo from pillar to post, winning the vacant IBF title. He tried his luck at welterweight last spring against Andre Berto, losing a really boring fight where Berto showed no interest in engaging Urango, and came back late in the summer to beat Randall Bailey in a predictably entertaining Friday Night Fights main event.

Strength of schedule goes to Urango. He's fought more good fighters (several more that weren't named here were solid tests given career status) and frankly just done more, but it's also not as wide as it might seem on first thought. Witter, Corley, Callist and Chuy Rodriguez aren't that far behind what Urango has fought.

What it boils down to, I think, is talent, execution, and where the fight goes. I cannot see a possible way that trainer Kevin Cunningham gets Devon Alexander into a firefight with this guy. There's no reason to. Alexander should be able to batter Urango with quick combinations, either from distance, or by moving in and getting out before Urango can unleash a wild left hand or his right hook. The danger in getting caught is there for anyone against Urango, but his bomb can be diffused by a guy with skill, and Alexander has plenty of skill.

Urango is almost certainly going to do what he always does. Hunt, march, and swing. He's a stalker that isn't afraid to get hit, with only a Randall Bailey right hand bomb so much as noticeably hurting him in his career, and Urango made a nice recovery from that trip to the canvas.

Neither guy has fought since last August, so rust shouldn't be a key factor for either. If it affects anyone, I'd guess it'd be Alexander. There's not much Urango does that requires a shaking of the rust.

I think you'll be able to tell within four rounds where this fight is going. Of course Urango can knock this guy -- or any guy -- out at any point with a great punch. He's got that sort of power. But if Alexander is picking him apart early, Urango has never shown an ability to really change what he does and force someone to do something different. For the most part, he hasn't had to. His only losses have come to Ricky Hatton (not exactly dynamic himself) and Andre Berto (who was just too good and too safety-first on that night).

Hope for an entertaining fight is certainly there, but the more I play this fight out in my head, the more I see Alexander doing a lot of things that Berto did and pretty well cruising to a routine decision. Alexander UD-12

As an aside, don't get yourself too excited about this being a unification bout. Chances are whoever walks out with both will give up one of the belts soon enough when he doesn't want to face whatever ridiculous and useless mandatory challenger is named for him.