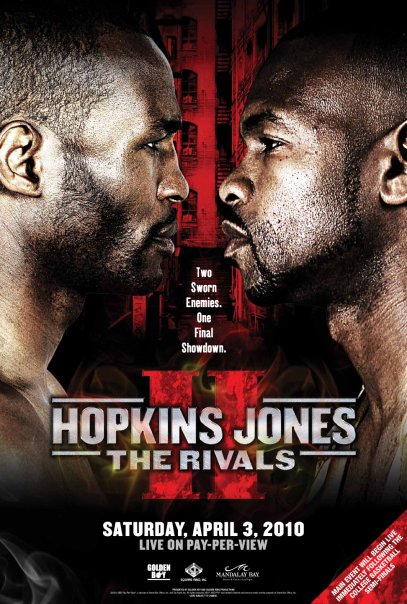 17 years is a long time damn time to wait for a rematch. But that's what has happened with bitter rivals Roy Jones Jr. and Bernard Hopkins, who first fought as relative youngsters back in 1993, and on Saturday night, will do it again at ages 41 and 45, respectively.

I know it's a $50 PPV. I know the undercard stinks. I know that 98% of us believe this fight is a farce, a travesty, an indication that Hopkins and Jones don't really care about anything but themselves. I know it's not happening when it should have, which is about 10 years ago. I know, and I agree with all of the naysayers. This fight, as a PPV, reeks. This fight overall sort of reeks. Hopkins claims to still be one of the best in the sport, but his last fight was with middleweight fringe contender Enrique Ornelas, and this one is with the completely shot Jones, who probably isn't even top 20 at light heavyweight anymore.

In most ways, this fight is a sham, and only marginally better than that last Azumah Nelson-Jeff Fenech fight.

But hear me out. I think this fight might well be very good, and I think we might be getting Jones-Hopkins at the only time where the fight itself was going to be much of a crowd pleaser.

I'm not suggesting anyone rush out and pay $50 for this, but I look at this matchup right now and I see two limited fighters who really don't like each other. Yeah, it's a money fight, but there is also the fact that it's a serious grudge match. Bernard and Roy do not get along. They are not pals outside the ring. They can barely fake their way through those silly "debate" press conferences they set up.

The last time I saw a couple of fairly limited fighters who really didn't like each other go at it, Antonio Escalante and Mickey Roman put on a war on ESPN2. That's an unfair comparison, I know. Escalante likes to bang and Roman has no clue what the hell this "defense" is that his trainer keeps talking about in the gym. They're also both in their oat sowing years still, which B-Hop and RJJ definitely are not.

So instead I jump over to MMA for a comparison. Last August, UFC 102 was headlined by Randy Couture and Antonio Rodrigo Nogueira, a couple of elder statesmen. Nogueira was only 33 at the time, but his best years are certainly behind him and he's taken a mountain of punishment over his career.

Couture-Nogueira was seen by most as a fight that would have been epic years ago, but now was just between a couple of guys past their primes. A lot of MMA fans slept on the fight.

They missed an instant classic. Couture and Nogueira fought each other like they were both 23 years old and had everything in the world to prove. There was no personal dislike there, but two professional titans went head-to-head. It felt almost like they were fighting for legacy supremacy. No matter when it happened, one could say he had beaten the other.

The '93 Jones-Hopkins fight is completely irrelevant to the current boxing world. Neither fighter fights like he did back then, in part because neither fighter can, and also because they both got a lot better, Hopkins in particular. This might as well be a clean slate for both of these guys. Realistically, they fought once on a Riddick Bowe undercard (an important and notable fight at the time, but not a "big fight"), and then when they both became flagship stars for the sport, they started a whole new chapter.

Even that video was a long, long time ago.

So where are we at now? Roy Jones Jr. is shot. There's no getting around it. He hasn't beaten anyone good in about seven years now, and has done a song-and-dance routine where he wins a few over inferior opponents and then loses in a money fight. Hopkins, meanwhile, finally lost his middleweight crown in two disputed bouts against Jermain Taylor, then stunned the world moving up and whooping Antonio Tarver to become light heavyweight king. After that, he beat Winky Wright, lost to Joe Calzaghe, and shocked us all again by dismantling Kelly Pavlik.

There's 86 years of boxing history coming to the ring for the main event on Saturday. And I expect this to be a fight. I realize I'm probably setting myself up to be let down, but I just have a feeling about this one. It's going to surpass all expectations. I truly believe this.

And no, nobody at Golden Boy or Square Ring are paying me to be excited about this fight. Just so you know that.

The thing is this: limited fighters match up and often make for great fights. The same can happen with two fighters whose skills have deteriorated, and I know everyone is in awe of what Bernard has been doing at his advanced age, but in no way, shape, or form is Bernard Hopkins at his peak now. He hasn't been for a while. He wasn't when he smashed Tarver or Pavlik, either.

I said when this fight first came up (before Green rattled Jones' cage in Australia) that I felt Roy Jones Jr. still had the style to give Hopkins hell. Despite Jones' ugly TKO loss to Green, and my own doubts that I'm actually right, I still feel that way. Bernard Hopkins can do the Mackie Shilstone stuff all he wants, but at the end of the day he's 45.

Jermain Taylor and Joe Calzaghe were athletic guys who made Bernard work a lot harder than he really wanted to, or could effectively work anymore. They both got the duke over Bernard in three fights. Hopkins against Calzaghe was flat-out winded by the latter stages of the fight.

Roy Jones can fight that sort of fight still. He's still a better athlete than Hopkins, still moves better, still throws in combination better, still is much quicker than Bernard -- and I mean much quicker. Bernard's notable wins over Tarver, Wright and Pavlik were, in a lot of ways, easy for him. Those guys didn't move a whole lot, didn't make Bernard step outside of his comfort zone. Hopkins is the boxing definition of a "cerebral assassin." He's an incredibly intelligent fighter, a guy who knows every trick in the book and wrote some of his own. He's also got Naazim Richardson in his corner, and Richardson may be the best tactical trainer in the game today.

The big flaws in Roy's game are flaws that might not be terribly exploitable for Bernard. The biggest is Roy's dodgy chin, of course, but I don't know if that'll honestly be an issue. All the good things you can say about Bernard Hopkins as a light heavyweight are true and all, but let's be real: he's not a puncher at 175 at all. Power is not part of his game. Danny Green is a guy who is incredibly strong, and Roy also went up to 180 pounds to fight Green. That was always a serious danger against Green. But I don't think it's something Roy should particularly worry about against Hopkins.

I have Hopkins ranked highly in our P4P list because I respect the hell out of him and because he's earned it. But my gut feeling is he's at the very, very end, and that this fight (win, lose, or draw) will show that. There's a reason he wants nothing to do with Chad Dawson, who he said would be like "another Kelly Pavlik" for him. I think he knows for a fact that Dawson would give him hell that Pavlik couldn't dream of. Beating Chad Dawson would do a lot more for Bernard Hopkins' legacy than beating the 41-year-old Jones can, because there's just nobody really taking this fight seriously outside of the biggest fans of both men. Jones is not a top light heavyweight. Bernard is, in a lot of minds, cherry-picking Roy at the tail end of Roy's career, to give himself some weird self-satisfaction.