Examining the Comeback: Is Vitali Klitschko All He's Cracked Up to Be?

Share All sharing options for: Examining the Comeback: Is Vitali Klitschko All He's Cracked Up to Be?

Before I begin, let me say that I think Vitali Klitschko is firmly and unquestionably the No. 2 heavyweight in the world. I am not questioning whether or not Vitali is still a top heavyweight. He is. I am questioning how good he is, and whether or not he deserves to be seen in the "unbeatable" sort of light that he largely has been since returning in 2008.

Vitali Klitschko's comeback has been some inspired stuff. After retiring for just shy of four years due to injuries that figured to keep him out of the sport for good, he's returned to go 4-0 and hardly lose a round in the process, knocking off a fearsome titlist, a crafty veteran, and two unbeaten young Americans.

The other day, Vitali said he felt his younger brother, Wladimir, was clearly the best heavyweight in the world today, and that Wladimir was "better than" he is anymore. He made no bones about it. Some people questioned the validity of that. Many still pick Vitali over Wladimir in a perfect world where perhaps they could fight.

I could not disagree any more than I do. I don't mean to sound smug or anything, but have I been the only one watching Vitali's comeback fights? Yes, he's been dominant, but against what opposition?

Two of the four fighters he's faced were tailor made for him and beat themselves as much as anything. Samuel Peter fought about the dumbest fight I've ever seen when he faced Vitali on October 11, 2008, repeatedly doing nothing but walking into heavy, slow Klitschko jabs. There was one wonderful photo from that fight that pretty much summed up the entire eight rounds of dominance, before Peter threw in the towel and went to Top Rank to rebuild his career: 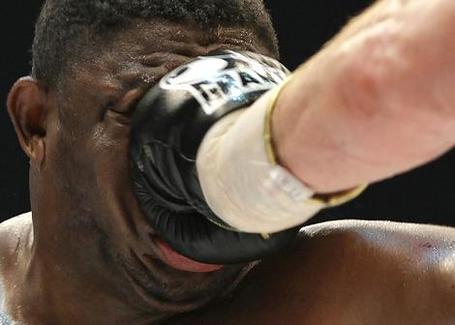 Arreola did much the same. Over and over, he stepped into Klitschko's punches without a care in the world it seemed, until after 10 rounds, with Arreola's face bloodied, bruised and swollen, his corner pulled him out of there, mercifully stopping the beating from continuing. In both fights, it was tough to find a round to give Arreola or Peter. They were both powerful, tough heavyweights, and both knelt at the feet of the creaky old man, whose superior boxing knowledge made them look like scrubs.

But then there's the other two fights. Juan Carlos Gomez came to stink out the joint. That was his plan. He thought he could fight ugly enough to squeak a decision. And Vitali looked stiff as a board early in that fight, too. Gomez, instead of attacking, stayed with Plan A. If he had adjusted early, he might have been able to keep Vitali from ever getting out of the blocks. Instead, Gomez's boring gameplan allowed Klitschko to loosen up, at which point the big man wore Gomez out. He took JCG to the woodshed and beat him down, earning a TKO-9 victory. That fight came between the Peter and Arreola fights.

Most recently, Vitali had all kinds of trouble with Kevin Johnson. It wasn't the sort of trouble that makes for a close fight. Vitali won every round. Johnson didn't come to fight. But it also struck me that as easily as Vitali was able to beat the younger man that night, it also might have shown a better, braver fighter than Johnson a way around the Vitali Klitschko aura.

Johnson just didn't allow Klitschko to do anything. Imagine if "Kingpin" had come to throw punches at any point in that fight. He really might have had a chance.

All I'm saying is that someone better than Johnson, bigger than Gomez, and smarter than Peter or Arreola could give Vitali Klitschko some serious problems. He's not getting any younger, and that back isn't getting any looser. Klitschko is old, shop-worn (more due to injuries than punishment taken), and thrives only when fighters allow him to do what he wants to at will. In both the Gomez and Johnson bouts -- again, clear victories, but really uninspiring performances -- he found himself across from someone that didn't just come at him and get hit. He didn't look nearly impressive in those fights as he did against Arreola and Peter.

Is there anyone like that? Wladimir Klitschko, of course, is all of those things (better than Johnson, bigger than Gomez, smarter than Peter/Arreola). I would take Wladimir over Vitali without a second thought anymore, because while Vitali may still have the power to test Wladimir's chin, I don't think he'd ever get to it. Could Vitali get past the Wladimir jab? Sure, as a younger man. But like his brother, he's not exactly a risk-taker anymore. And I don't think he has Wlad's one-punch power anymore either, partially because almost everything he throws anymore is a pure arm punch.

Depending on how Haye looks against John Ruiz, I think I'd pick David Haye over Vitali now. I don't think it'd be anything close to exciting. I think he'd use his speed, his movement, and occasional bursts of offense to grind out an ugly decision, much as he did with Nikolai Valuev. That is, if Haye really has the guts to attack Vitali, even in bursts. And that's the big X-factor in that potential matchup.

Other than that, though, there really isn't anyone out there that fits the bill. So that means that Vitali Klitschko is certainly the No. 2 heavyweight in the world, but I feel we're not really saying much when we say that, either. It's a weight class full of guys who just aren't right to beat him, for one reason, another, or several. It's another instance of the current version of Vitali Klitschko maybe not being all that great, but he's sure as hell a lot better than the vast majority of today's heavyweight field, and if he's not actually better, his style, his size, and the limitations of others make him a prohibitive favorite over just about anybody.