Share All sharing options for: Rest in Peace: Arthur Mercante and Lorraine Chargin

The sport of boxing lost two respected, longtime members of the family this week, as both Lorraine Chargin and legendary referee Arthur Mercante passed away. Bad Left Hook wishes to extend our deepest sympathies and best wishes to the families, friends and loved ones of both Mr. Mercante and Mrs. Chargin. 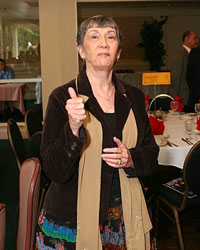 Lady Lorraine Chargin co-promoted hundreds of fights with her husband, Don, and was, as Ron Borges put it, both loved and feared by people all across boxing:

I once saw her threaten to throw Don King out of Arco Arena in Sacramento, Ca. because he showed up without tickets or credentials to a show she was running and thought he could just sweep through the back gate and into the building. He thought being Don King would be enough. Lorraine was at the gate. He should have known better.

By the time Lorraine was finished dressing King down, even his hair was flat. The Dragon Lady could do that to you if she felt the need, but she never did it to flex her promotional muscle or because it was her husband’s show or because she was smarter than you were or had more authority than you did. She did it because you didn’t act right or you thought the world owed you something like a free ticket or, well, because you were an asshole. If you weren’t any of those things, you never would have a problem with Lorraine.

In 2007, Lorraine talked about her perspective on boxing:

"I was thinking the other night, I couldn't sleep, I was thinking about my life in boxing. It's one long string and every fight I've ever seen, it's not this fight and that fight, that's a guy thing. Don can remember in the fourth round of a certain fight, I can't. I mean, to me, it's all the fights are like a great big picture, a great mosaic. I think that's a female thing. My perspective of boxing is totally the opposite from what you see in a fight."

"What you see in a fight and what I see, I mean, I am still learning. I was watching this fight on television with Don (Celestino Caballero vs Jorge Lacierva) the other night and I asked Don what would this style be called other than just awful. That's the worst thing I've ever seen. There are certain fighters that are defensive-styled fighters, I'd rather go and clean my bathrooms and I won't even watch it. I like fighters who come to fight." Maybe like the main event (Israel Vasquez vs Rafael Marquez II) of that same card? "Thank God!" She would say with a release of her breath.

The legendary Arthur Mercante has long since gone down in history as one of boxing's all-time great referees. His son, Arthur Jr., referees today. The younger Mercante was last seen by most refereeing the Cotto-Clottey fight last June.

His father had the respect of everyone, and detailed his approach to refereeing in his 2006 memoir, "Inside the Ropes":

"The action is constant for three minutes a round, anything can happen at any time and you need to know how to control the fighters and keep an eye on what’s going on in the corners between rounds," he said. "You need to be firm but never intrusive; alert, but not overreactive; mobile, but never out of position to intervene at a moment’s notice."

"Mercante was a terrific, terrific man, a real gentleman, and he loved being a referee and he really worked at it. He was always in great shape and he was dead honest. You rarely realized he was in the ring because he was generally unobtrusive and he let the fighters fight."

He was the third man in the ring, of course, for Ali-Frazier I, which he worked for either $500 or $750, depending on the source.

Mr. Mercante was 90, and Mrs. Chagrin was 79. They both lived full, wonderful lives, and gave a lot more to boxing than boxing could have given back. The sport will miss them both, may they rest in peace.