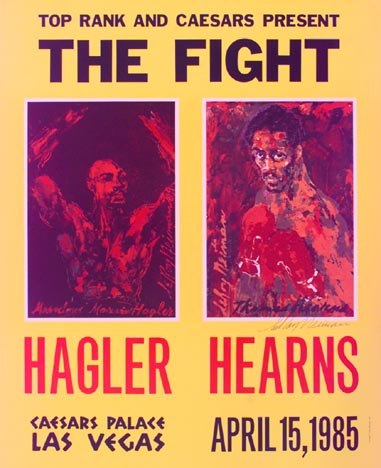 25 years ago today, "Marvelous" Marvin Hagler and Thomas "Hitman" Hearns waged an unbelievable war that to this day is considered by many to be the greatest fight they have ever seen. Ted "The Bull" Sares remembers this impossible-to-duplicate battle.

This unforgettable classic was for the WBC, WBA, and IBF World Middleweight Titles and it was fittingly held at Caesars Palace in Las Vegas on April 15, 1985-some 25 years ago. It was also the 1985 Ring Magazine fight of the year.

When the bell rang, both combatants came out fully torqued and ready to destroy one another. Hagler went to the body early, but was shook by a Hearns's right. He shook it off and just kept coming taking the best that Tommy could offer. They then began their unmitigated savagery exchanging bombs with few clinches. Neither gave an inch as elbows landed, low blows were thrown, and heads collided, but Hagler got the better of the roughhousing. At the bell, Hagler gave Hearns a long look that seemed to say "why are you still around?" The crowd was up and roaring at the bell and would never sit down again.

Round two was equally action-packed. However, Hagler began to assert himself rocking Tommy with long lefts and rights. He had initialed the stalk in this canto as Tommy began backing up. Hagler had gotten the necessary separation to land some punishing shots but then, with 30 seconds to go in the round, he and "The Hitman" engaged in pure hell. Each hammered the other with crunching and well-leveraged shots that would have taken out most other opponents. At the bell, it was Hearns who gave Hagler a funny look and this one reminded me of the one Jake LaMotta gave Sugar Ray Robinson after Sugar had brutalized him but failed to put him down in the 1951 St. Valentine Massacre fight. Tommy had that smile on his face that said "Hey Hagler, I'm still here." But was he?

By now, Hagler had incurred a hideous cut on his head that made him look even more menacing-as if that were possible---but it was a threatening cut that gave a sense of urgency to this modern version of the "Brockton Blockbuster."

The third round began with the crowd anticipating a stoppage that could come in more ways than one. Indeed, early into the round, referee Richard Steele had the doctor take a look, but the fight quickly continued. Hagler then began the stalk in full mode (and urgency) while Hearns resorted to boxing to keep Hagler at bay as he had done against Sugar Ray Leonard in their 1981 classic. Hagler began to rock Tommy and then he stunned him with a long right to the head. Tommy fell back and Hagler literally ran after him and landed as vicious a right as has ever been thrown in a boxing ring. As Marvelous Marvin stepped back, Hearns fell in a heap and looked as if he were out cold. Miraculously, he somehow summoned the will to get up before the 10-count but he was a rag doll and the fight was stopped at the 1:52 mark. Tommy had nothing for which to be ashamed; he had given his all, but the stalk, stun and close had been completed.

Ironically, the fight may have taken more out of Hagler than Hearns. Tommy would win his next five and go 21-3-1 in his remaining 25 outings to finish with a 65-5-1 mark. . Hagler would fight John "The Beast" Mugabi a year later in a grueling bout in which he finally stalked , stunned, and took out "The Beast" in the 11th round. Then, a year later. he would lose to Sugar Ray Leonard in a close and controversial 12 rounds of tactical action that would be his last fight. His final record was 62-3-2. He is an inductee of the International Boxing Hall of Fame and the World Boxing Hall of Fame-awards that Hearns will receive as soon as he is eligible.

As for their fight, it was one for the memory bank and one that hopefully will put in perspective what we witnessed this month (April 3, 2010) when two once proud and great middleweights gave us something somewhat less than three rounds of unmitigated savagery.