Share All sharing options for: Fight Previews: Pavlik-Martinez and Bute-Miranda 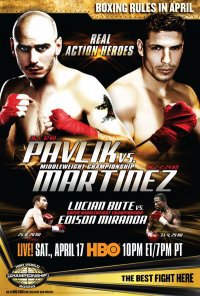 Saturday night's HBO World Championship Boxing double-header is one that has a lot of people talking, at least about the main event. Kelly Pavlik-Sergio Martinez is on paper a potentially great fight with a lot of wrinkles on both sides. We'll go there first, and then look at the Lucian Bute-Edison Miranda super middleweight fight.

For all the world, I can't shake the fact that this feels like a fight where we've got one guy whose reputation has been reeling (Pavlik) against a guy who has picked up a lot of steam with the boxing hardcore fanbase (Martinez), and when the dust clears ... well, I think some people are going to be looking at things a bit differently.

Kelly Pavlik is the world middleweight champion. I'm not saying he's a world middleweight champion on par with the greats who have been able to legitimately claim that distinction over the decades, but he beat the man (Taylor) who beat the man (Hopkins), and he's the real deal at 160. The fact of the matter is, the middleweight division has been iffy for years. It's at a truly low level right now; with Arthur Abraham scampered off to super middle, Kelly Pavlik is really the only guy in the division who can claim to be much of anything, except for Paul Williams, who following his last fight took a small hit himself in terms of where he stood at 160.

What I'm saying is that the middleweight division is not Kelly Pavlik's fault. He beat Jermain Taylor spectacularly, then beat him again in a catchweight rematch. Gary Lockett and Marco Antonio Rubio were mandatories, and Pavlik, like a lot of guys, actually cares about his belts, an instinct I'm hoping will die off sometime when someone can convince more of these guys that the general public does not care about whatever three-lettered trinket they carry around, just if the fight they're making is actually interesting. Miguel Espino I'll give you -- Pavlik and his team picked that guy and he was every bit as undeserving as Lockett.

If you look back at Bernard Hopkins' lengthy and technically historic reign as middleweight champion. Hopkins first won a recognized title way back in 1995. He had a number of terrific wins along the way, but plenty of his own Locketts, Espinos and Rubios, too. This division was treading water long before Hopkins lost the crown to Jermain Taylor, who himself struggled to find suitable opposition. Taylor's defenses were against Hopkins, junior middleweight Winky Wright, junior middleweight Kassim Ouma, and junior middleweight Cory Spinks. That trumps what Pavlik's been given, but Kelly's also fought Taylor and Hopkins at catchweights, and honestly, what else was there? Arthur Abraham and Felix Sturm weren't exactly banging down the door to fight Pavlik, either. For one thing, they'd have had to leave their bubble in Germany, and for another thing, Kelly Pavlik was a world apart from the guys they were fighting, too.

I also have to admit that I find it a bit peculiar that Pavlik is receiving so much by way of back-slapping and "way to go" comments for fighting Martinez, a junior middleweight by trade who is 35 years old and has never beaten a guy as good as Pavlik. I'm not implying I think this fight is unworthy -- there are about five guys at 154 I'd rather see Pavlik fight than anyone at 160, and Martinez is at the top of that list. But Martinez has broken through with a win over Alex Bunema, a disputed (to say the least) draw with Kermit Cintron, and a very exciting loss to Paul Williams. We're talking about a gatekeeper-type and two guys who are still most famous as welterweights.

How is he going to handle Kelly Pavlik?

Kelly Pavlik is big, but with Martinez, it's mostly just a height advantage (in terms of physical size alone). Pavlik is just about 6'3", while Martinez is 5'11", but the long-armed Argentine has a one-inch reach advantage (76" to 75"). Martinez has also fought Kermit Cintron (5'11", 74"), who wasn't as tall as Pavlik but had a similar reach.

The real difference? The way it's used, which is always the case, of course. Cintron has a habit of plodding around the ring and looking to load up his right hand, which is really his only weapon. There is a feeling among some, I think, that Pavlik himself is nothing more than a straight right hand. But he's got more than that. In the rematch with Taylor, he showed a more diverse set of skills than the simplistic "stalk and throw the 1-2" that he's hyped for having. Pavlik throws a good uppercut, uses his jab well, and applies very effective pressure at his best. Can Martinez deal with that? Sergio has had problems with right hands in past fights, and I'll guarantee none of them were as good as Pavlik's is. He may have more than the straight right, but there's no questioning, I don't think, that the "southpaw killer" is his best punch.

The tough veteran Bronco McKart is the only southpaw of note who Pavlik has faced in his career, and though McKart has a great place in boxing to this day, he's not Sergio Martinez. Martinez's slickness is talked up a lot, but more than just being a cutie, he's proven he's tough, too, and that he can punch better than his KO rate (44-2-2, 24 KO) might lead you to believe. The question with that power now is whether it translates against not just a true middleweight, but a big middleweight who can take a punch.

There are a lot of people taking Martinez as the sexy pick, and I think part of that is "What have you done for me lately?" Pavlik's two fights in 2009 were a win over a nearly-terrified Rubio and then one over Espino in December. Martinez also fought twice last year, and gained more steam in both, even though he officially went 0-1-1. If you look at the December fights for both, of course you'd be inclined to pick Martinez. Sergio fought balls to the wall with Paul Williams, going tooth-and-nail for twelve grueling rounds, while a rusty Pavlik faced a guy that simply could not hurt him no matter what he did, eventually running him over on pure physical advantages. Pavlik fought a tune-up, while Martinez fought on the world level. One is fundamentally more impressive than the other, even though Martinez lost and Pavlik won.

I just don't see Sergio having enough important advantages, or important advantages by enough of a margin, to be able to overcome the fact that Kelly Pavlik hits like a mule kicks and is a much bigger man. Pavlik should be coming with renewed fire on Saturday -- if he doesn't, then I'll question officially where his head is at, because this fight is monumental for him. It's the first time since the Lockett laugher that he's been on regular HBO, and the first of his fights since October 2008 that HBO has bought at all. Kelly Pavlik needs this win, and needs it to be impressive. He has to know that. Whatever he says about not caring what people say, believe me, Kelly Pavlik has heard it, processed it, and most likely cares about it on some level. Beating Sergio Martinez convincingly might get people to remember the humble, powerful kid from Youngstown, Ohio who broke through in 2007 by knocking out Jermain Taylor.

I like Sergio Martinez a lot. He's almost 100% different than the guy I thought he was before he finally started stepping up in class. He's tough, he seems to let things roll off his back, and he can fight his ass off. I just think this is an awful matchup for him, and that Kelly Pavlik is about to get things back on track in Atlantic City. Pavlik TKO-10 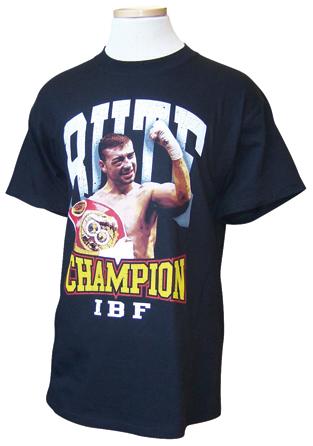 Alright, I tried to sort of say this with the Last Five Fights feature on Wednesday for this fight, but I didn't want to run out of things to say.

Notice a pattern here? Bute has been awfully carefully matched during his title run. This is not a whole lot different than the way that the German promoters protect their guys with hand-picked matchups. Bute is a very skilled guy, but more importantly up north, he's a monster draw in Quebec. If they're paying to see him fight guys like Berrio, Andrade and Zuniga -- no offense to any of them, because I like watching all of them fight -- why risk something more? I'm not saying I know, because I don't, but is it really any wonder Lucian Bute is not in the Super Six?

Bute can make a lot of money fighting one-dimensional guys in Montreal, and doesn't need the Super Six to up his profile much. I don't know that he even really cares about becoming big in America. He's the biggest star in what has become in my opinion the best boxing city in North America, if not the entire planet. Plus, out of the Super Six, he's become something of a hot property for HBO, which can afford to spend more money on fights than Showtime can. End of the day, Lucian Bute is making a lot of money at the gate and from HBO now (which was not true before), because if he keeps taking fights like the ones he's been taking, and this one with Edison Miranda, he'll stay unbeaten and the Super Six winner will come to him. And if not, he fights Kelly Pavlik in what would be, if things went according to plan, a very big fight.

Folks fall in love with punchers, and Lord knows Edison can hit, but it doesn't matter when he gets to this level. He knocks out guys like David Banks and Willie Gibbs and Sherwin Davis and all those scrubs he fought, but he didn't knock out Arthur Abraham or Kelly Pavlik or Andre Ward or Allan Green or Jose Varela. Two of them (Abraham and Pavlik) unceremoniously beat the crap out of him, particularly Pavlik. He's never been the same since Pavlik kicked his ass, and he's never going to recapture that either. He used to have the reputation of being this monster power puncher, but over time he's been exposed. Yeah he has power, but so does Victor Oganov.

Honestly, I hate this fight. I see Miranda as almost no threat to Bute besides the celebrated Puncher's Chance. Bute should be able to box circles around Miranda, and he has the power to put him away eventually, I believe. This matchup is so transparent that I'm almost rooting for Miranda to knock him out and screw up a lot of plans, because it would serve a lot of people right. This is a cherry-picked fight with a challenger who has not by any stretch of the imagination truly earned a title shot, but then who has these days, I suppose. Bute TKO-7