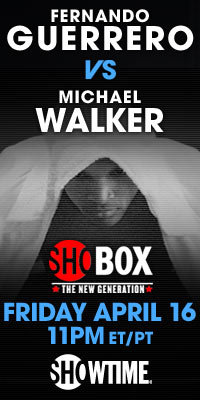 We'll be here tonight at 11pm EDT for a ShoBox event headlined by one of Bad Left Hook's favorite prospects, middleweight Fernando Guerrero. We'll also be talking about Friday Night Fights for the hour that the ESPN2 show is on prior to ShoBox.

Guerrero (17-0, 14 KO) is headlining again at the Wicomico Civic Center in Salisbury, Maryland, where he's become a very successful regional draw. He'll take on veteran Michael "Midnight Stalker" Walker of Chicago. Walker (19-3-2, 12 KO) is a durable guy who has never been stopped, and gave Golden Boy's Daniel Jacobs some good work in May 2009 on the Hatton-Pacquiao undercard.

In the ShoBox co-feature, Akron's Shawn Porter (13-0, 10 KO) faces powerful Raul Pinzon (17-3, 16 KO) in an eight-round bout. Pinzon nearly upset Ricardo Torres last May before being stopped in the tenth. He was stopped in five last November by Mike Jones, and stopped in one round in December 2008 by Saul Alvarez. Unlike Walker, he's not the most durable guy, but he can be dangerous. Porter struggled a bit in February against tall, awkward southpaw Russell Jordan on Friday Night Fights, and is looking for a more impressive outing this time around. He'll be giving up a lot less height this time around if nothing else.