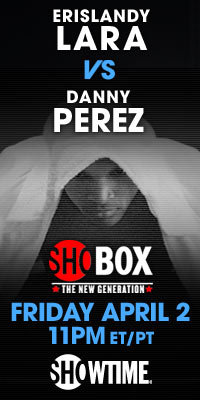 Shobox features Erislandy Lara (10-0, 6 KO), the young Cuban I already have ranked as the No. 10 junior middleweight in the world. We've seen most of his pro fights on TV already, and he's got loads of talent. He faces 33-year-old veteran Danny Perez (34-6, 17 KO), who has really only lost to good fighters in his career, and is a nice test for a rising fighter. Perez did lose to one nobody very early in his career, but since then has lost to Antonio Margarito (twice), Jesse Brinkley, David Lopez and Carlos Molina. Lara got some seasoning in his last fight from the awkward Grady Brewer, before stopping Brewer in the 10th and final round.

I won't be in tonight. Brick might be. But here's a place to talk fights with your fellow fight fans. It's a nice Friday night. Tomorrow we'll have live, round-by-round coverage of the Haye-Ruiz card at 4pm EDT, and then the Jones-Hopkins rematch (and full undercard) starting at 9pm EDT.