Share All sharing options for: TV and Internet Boxing Schedule - Weekend of April 30 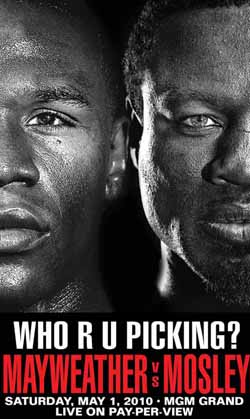 As is sometimes the case, in a weekend with a huge megacard, the other promoters often step aside and let that card have its moment in the sun.  Thus, there's no Friday Night Fights card on ESPN2 and no Top Rank Live card on Fox Sports Net.  If you're willing to wake up very early, however, there will be another big fight in Japan early Friday morning.

NTV (Japan), 6:00 a.m. Eastern, Hozumi Hasegawa vs. Fernando Montiel, Toshiaki Nishioka vs. Balweg Bangoyan.  Hasegawa makes his 10th defense against his toughest opponent in a while, fellow titlist Montiel.  Because Montiel's IBF belt isn't recognized in Japan, this one is just for Hasegawa's WBC belt.  Nishioka also defends his title against undefeated Pinoy Bangoyan.  Bad Left Hook will be providing live round by round coverage of this card.

Sky Sports 2 (UK), 4:00 p.m. Eastern, Prizefighter Cruiserweights II - Herbie Hide, Mark Krence, Darren Corbett, Jon-Lewis Dickinson, Wayne Brooks, Leon Williams, John Anthony and Zahid Kahut.  Prizefighter's format is that the fighters will fight a single-elimination tournament of three round bouts, back to back to back.  The winner gets the prize and generally gets a shot at a BBBoC title of one sort or another.  Former heavyweight titlist Herbie Hide, who they are advertising as being the biggest name fighter in Prizefighter tournament history, is a very heavy favorite over a field that inlcudes one man who held the Commonwealth title in the late '90's, one man who fought for the heavyweight commonwealth title but lost, and several novices who only have a few fights of experience.   Bad Left Hook will be providing live round by round coverage of this card.

Telefutura, 8:00 p.m. Eastern, Robert Guerrero vs. Roberto David Arrieta, Juan Velazquez vs. Emmanuel Castro. This is Golden Boy's debut of the revived Solo Boxeo Tecate program.  Guerrero had been scheduled for a bigger fight, but had to cancel when his wife's cancer relapsed.  It seems that she is doing better now and thus he's taking this fight, which is a stay busy bout more than anything.  It's always nice to see more boxing on TV, but with Golden Boy signing onto a 30-card schedule, I find it hard to believe that this show will be any good overall, especially considering their general lack of success with smaller cards in the past.

Telemundo, 10:00 p.m. Eastern, William Gonzalez vs. Jose Luis Araiza, Felix Diaz vs TBA.  Gonzalez has been on a roll since giving Joseph Agbeko a tough fight.  Araiza is a 27-1 Mexican who hasn't lost since his pro debut, but he also has only faced a few fighters with winning records, so he's almost a complete unknown.  Diaz was a Dominican Olympian in 2008.

Showtime, 11:00 p.m. Eastern, Marcus "Too Much" Johnson vs. Derek Edwards, Don George vs. Osumanu Adama, Edwin Rodriguez vs. Kevin Engel.  A nice, three-fight ShoBox with the promising but still raw Johnson in the main event against another unbeaten fighter.  Edwards is 25-0, but he's 30 years old and not the prospect that Johnson is.  George is (like Edwards) a Chicago native fighting on his home turf, facing Ghanaian Adama.  Beware the Ghana fighters.  Rodriguez is a super middleweight prospect from Massachusetts who has been pretty well blowing through the competition in the northeast to this point.  Engel doesn't figure to give him any more trouble than Darnell Boone or Brian Norman did.  Bad Left Hook will be providing live round by round coverage of this card.

ARD (Germany), 4:30 p.m. Eastern, Marco Huck vs. Brian Minto, Karo Murat vs. Tommy Karpency.  Huck is taking his second fight in a row against a career heavyweight moving down to cruiserweight.  In Minto's last fight, he was blasted out by Cris Arreola.  As a former football player who picked up the sport late, he's not the best technical fighter in the world, but you can be guaranteed that he'll mix things up and go for the knockout.

HBO PPV, 9:00 p.m. Eastern, Floyd Mayweather Jr. vs. Shane Mosley, Saul Alvarez vs. Jose Miguel Cotto, Daniel Ponce de Leon vs. Cornelius Lock, Hector David Saldivia vs. Said Ouali.  We'll have a bunch more coverage on this card throughout the week.  Bad Left Hook will be providing live round by round coverage of this card.