Share All sharing options for: Fight Previews: Berto-Quintana and Caballero-Yordan 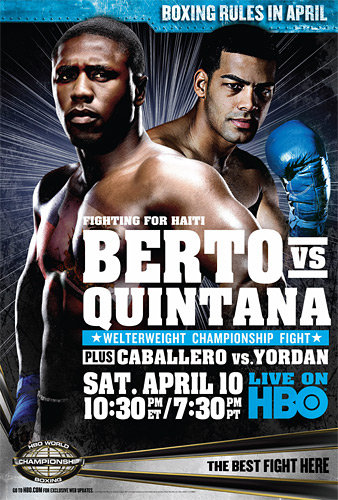 Tomorrow night's HBO double-header is a good way to kick off the month for the cable giant, which has had a pretty slow year thus far in the ring, but one that's about to pick up in a major way. You could consider this card the leadoff hitter for what is about to be a massive run of intriguing fights (Pavlik-Martinez, Arreola-Adamek, Mosley-Mayweather, Williams-Cintron, Khan-Malignaggi all coming in the next five weeks).

As we discussed yesterday, Berto's paper title finally became somewhat legit last year when he survived a tough challenge from Luis Collazo in January 2009. But since then, he's fought just once, against 140-pounder Juan Urango, a dull fight that earned Berto more skeptics than fans. His January 2010 bout with Shane Mosley was canceled after the devastating earthquake in Haiti, and now we're here with the young titlist facing Quintana, who has taken "0s" from Joel Julio and Paul Williams.

Quintana's style can definitely make him a spoiler on his best days. He's a talented southpaw, probably not as tricky as Collazo, but a stronger puncher. He's also probably less durable. Miguel Cotto blasted him, Paul Williams took him out in one round in their rematch, and in December, Jesse Feliciano put Quintana on the canvas before losing the bout the next round due to a cut.

The questions are simple, and hardly unique to this fight:

On the first point, my mind's eye just can't see Quintana keeping up. To make this a fight, I think Quintana's going to have to put some fear into Berto early in the bout, the way Luis Collazo did. Given that Quintana can punch, I think he can do that, but I don't know that he'll be able to.

Berto has been at his best when he swarms opponents, rather than laying back and letting them come to him. He struggle with Collazo perhaps not just due to Collazo's skill and craftiness, but because he may have taken Collazo lightly. After all, every fight in his career until that point had been more or less easy work for him. He'd had no real trouble with guys like Forbes, Trabant, Rodriguez and Estrada, and Cosme Rivera's knockdown of Berto was a flash knockdown. Berto dominated the rest of that fight. There were some sturdy guys in there (Estrada, Rivera and Forbes are tough, if nothing else), and Berto basically walked through them, because his natural ability allowed him to.

He's better than Quintana. On pure skill, he is better than Carlos Quintana, and it's not particularly close. Berto has star potential still, I believe. He's got the ability to be an exciting fighter. But does he want to? Against Urango, you could argue that Berto fought smart, but it was also dead boring. Comparisons to a young Shane Mosley started waning a bit after that fight, at least until Berto and Mosley sat down at a table with Max Kellerman.

Berto (25-0, 19 KO) could really use a good performance, but I hesitate to say he actually needs it. He needs it if he cares about the way he's perceived, but he probably doesn't. A win here sets Berto up as a logical next opponent for either Manny Pacquiao or the Mosley-Mayweather winner. He'd be an unbeaten guy with the green belt and the support of HBO. Whether or not Berto would want to step up like that is up in the air, but you kind of question what else he could really do. The division doesn't have much going on past the top guys. Miguel Cotto is moving up to 154 in his next fight, Joshua Clottey is sort of an outcast now after his performance against Pacquiao. Berto could make a WBC-approved defense against the Collazo-Aydin winner, but why would he do that if there's money on the table for a Mayweather, Mosey or Pacquiao fight?

But that's all in the possible future. On Saturday, Berto is the overwhelming favorite, and he should be. If he comes to be impressive, I don't think Quintana lasts past six or seven rounds. Quintana has been intending to move up to 154 for good, but he keeps getting called back to 147. He was set to fight Joshua Clottey, but that went under, so he fought Feliciano in December. 154 was still his spot, unless he got the call at 147 again, which he has. Is 147 really good for him anymore? There's more money to be made at welter than junior middle, so the only reasonable explanations are that he's belt-crazy (where he can win one easier at 154, conceivably), or he has trouble making the weight strongly.

I think a lot of people might worry too much about Quintana being a southpaw. He's a southpaw, and a good one, but Luis Collazo is better and, again, just slicker and trickier. Quintana isn't much to figure out. He's a fairly basic guy. If Berto struggles with Quintana stylistically, then we can start saying that Andre Berto definitely has trouble with southpaws, because he really shouldn't be greatly troubled by Quintana's left-handedness.

Bottom line: if Andre Berto is mentally right, if he's physically right, he'll steamroll Carlos Quintana. Quintana should not be totally counted out, but I don't like his chances in this matchup to say the least. Berto TKO-7

Indonesian Yordan is like a mini-legend at this point. For 4 minutes and 47 seconds back in March 2009, Yordan (25-0, 19 KO) was giving Robert Guerrero hell on HBO. A cut came from a clash of heads, a bad cut, and Guerrero quit on the spot. Yordan was an unknown coming in, and yes he looked good, but we're talking about less than five minutes of action against the only notable opponent of Yordan's entire career.

Now he's back after a couple more wins on his home turf, and he takes on long-reigning junior featherweight titlist Celestino Caballero, who is jumping to 126 pounds. He might be chasing Juan Manuel Lopez in his own mind, but should he beat Yordan, he's more likely to face Lopez's stablemate, Yuriorkis Gamboa. Caballero (33-2, 23 KO) is what he is. He's tall, he's exceptionally awkward, and on some nights, he looks like an impossible task for most guys.

He tore Steve Molitor apart when they fought. But he then had a lot of trouble with Jeffrey Mathebula. He also once got more test than he should have from Jorge Lacierva, in what was one of the dirtiest fights you'll see. He's got a bunch of quality wins on his record: Molitor, Daniel Ponce de Leon, Somsak Sithchatchawal, and others. He's a P4P contender in a lot of eyes. And with his crazy dimensions (5'11" and fighting now at 126), he can simply be too much to handle for a lot of guys. Yordan, at 5'7", is a fairly standard featherweight.

I'm not picking a winner here. I simply do not know enough about Yordan. He looked good against Guerrero, but a lot of guys look good for two rounds. We'll find out a lot more about Daud on Saturday, but this is a dangerous fight for both guys, and a really outstanding co-feature for the show.