Normally we don't do undercards or co-features with a last five fights, but both of these guys are on the brink tomorrow night in the Khan-Malignaggi co-feature. Nate Campbell is getting old, and Victor Ortiz has a lot of people doubting his resolve. They've each had some tell-tale signs in their last five, so let's look back.

We'll start with the veteran.

Since his second loss to Robbie Peden in 2005 (not the famous one), Nate Campbell had started to show further signs of life. Sure, he'd gone just 4-2 in the six fights since, but the two losses to Francisco Lorenzo and Isaac Hlatshwayo were debatable split decisions, and he had demolished Almazbaek Raiymkulov (Kid Diamond) and Matt Zegan in that stretch, too. The fight with Hlatshwayo was an IBF eliminator for the #2 spot, so naturally the IBF concluded that Campbell's next fight (perhaps in a bit of poetic justice) should be with Zegan for ... the IBF eliminator. Right.

Quiles took a vicious beating in a fight not soon forgotten by any who saw it live. Campbell was on the warpath in there, and Quiles really had no answer. By the middle rounds, Quiles looked like he was in pretty bad trouble, and you could argue that the fight should have been stopped then. By the ninth or so, it was clear it should have been stopped. Quiles' corner and referee Jorge Alonso did nothing. In the 12th round, ESPN analyst Teddy Atlas, who was ringside calling the action for Friday Night Fights, was screaming for the fight to be stopped. That was legit, not like the recent HBO hen convention during Caballero-Yordan. Quiles took a bad beating and has not fought since.

With Julio Diaz not committing to fight Campbell, Nate was matched with Wilson Alcorro in what basically amounted to a stay-busy fight. Alcorro was a Colombian who didn't quite cut it outside of his home country, though he did take Jorge Solis to a draw once (Solis won a rematch). Campbell put the hurt on him. After Campbell, Alcorro fought five times, going 1-4. His losses were to Urbano Antillon, Mickey Bey Jr., Hector Sanchez and Victor Cayo, and his win burst the bubble of Juan Carlos Batista (18-0 coming in). Alcorro last fought in March '09.

After Juan Diaz dominated Julio Diaz to unify three lightweight title belts, the Texan was up for the challenge and decided to give Campbell his long overdue title shot. It didn't hurt that Don King, at the time, promoted both men (who are now both promoted by Golden Boy). Diaz-Campbell was the HBO co-feature in Cancun beneath the Oleg Maskaev-Samuel Peter heavyweight title fight.

Campbell's mission was clear early: shake the kid up, rough the kid up, get in his head. Diaz, 24 years old and 33-0 at the time, had really met little resistance. Jose Miguel Cotto gave him a bit of a fight in 2006, but ran through Randy Suico, Fernando Angulo, a faded version of Acelino "Popo" Freitas who held his own and himself gave up when the going got rough, and Julio Diaz, who was stunningly out of his league against Juan and hasn't looked good in the two and a half years since.

Campbell did what nobody had before. He stayed in tight with the "Baby Bull," told him his body work wasn't going to break him down like it had Freitas, Diaz, etc., and even flat-out said right in Diaz's face: "All day!"

A bad cut turned the tide of this fight when Diaz's corner had absolutely no clue how to work on the cut. It was appalling that Juan Diaz, regarded then as the No. 1 lightweight in the world and one of the brightest young stars in boxing, didn't have a cutman on hand who could at least manage the damn thing. Campbell took full advantage, wearing on the young man's psyche and beating him up. In the end, Campbell got his deserved victory, and just to note, the SD call was pretty weak. Ric Bays' 114-113 Diaz card was fairly crap.

What Didn't Happen: Nate Campbell was scheduled to fight Joan Guzman later in 2008. Guzman didn't make weight, wouldn't fight (his story is he was not allowed to, but Joan Guzman has lots of stories), and thus the fight was canceled. In the aftermath, Campbell went bankrupt while holding three lightweight titles, and feuded openly with promoter Don King.

This was originally set to be the co-feature of the cursed Valentine's Day HBO triple-header, another grand King production of the modern era. Instead it wound up as the main event. Campbell didn't make weight, but did fight and eked out a hard-fought decision against the rangy Funeka in Funeka's U.S. debut. The difference came down to world-level experience. Campbell was just a better overall fighter than Funeka. After the fight, Campbell offered an apology for not making weight, and stated his plans to move to 140 pounds immediately.

Having shaken loose from King's stable, Campbell lined up a fight with top 140-pounder and titlist Timothy Bradley in August. Campbell looked every day of his 38 years against Bradley, who was just quicker and laying into the veteran throughout the short period of action we got to see. A headbutt from Bradley messed up Campbell's eye and forced him to pull out of the fight. It was originally ruled a TKO-3 for Bradley, but was rightly changed to a no-contest after at a hearing that nearly resulted in a streetfight between the hot-headed Campbell and Bradley. 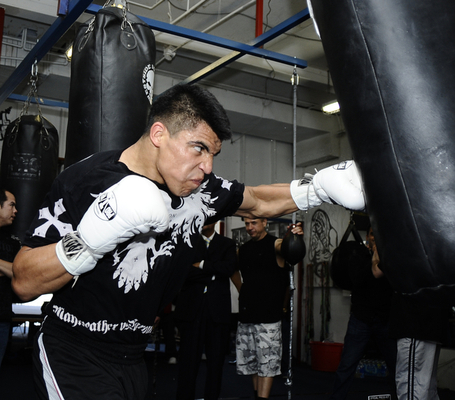 This was part of the pathetic excuse for an undercard that was the Oscar de la Hoya-Manny Pacquiao show. Resto came in a flamed-out prospect, which didn't stop HBO's Manny Steward from being shocked and awed that Ortiz dominated Resto, as apparently Manny had missed the "flamed-out" part of Resto's career. Sure, Resto hadn't lost since back-to-back defeats against Carlos Maussa and Michael Warrick in 2003-04, but he'd also fought just five times since, and all against very marginal, easy competition, though he did avenge the loss to Warrick, who never should have beaten Resto in the first place. Resto wasn't a flame-out who had, like, debilitating losses, he was just a guy who lost a couple fights and didn't do much of anything after. He never really improved. Ortiz blew him out in two to the surprise of Manny Steward and the feigned surprise of the promoters.

The frustrating Arnaoutis had won four in a row since back-to-back losses to Ricardo Torres and Kendall Holt, but also offered little on paper. Arnaoutis is a decent fighter, but physically it was clear to see he stood little chance at holding his ground against the aggressive, strong Ortiz. Ortiz started wailing on him in round two, Arnaoutis pretty much just stood there covering up and getting rocked around some, and the referee stopped it.

For the first time, Victor Ortiz wound up faced with a guy who wasn't afraid to get hit by him.

Ortiz floored Maidana in the first round. In one of those "jump out of your seat moments," Maidana got up, took his eight count, and told the referee he was alright. He proceeded to immediately put Ortiz on his ass with a rocket launcher of a right hand. Ortiz and Maidana warred from there on out. Ortiz dropped Maidana in the second round, then did it again. Through two rounds, Maidana had been down three times, Ortiz once. Through five, Ortiz was winning the fight on the scorecards, but was also bleeding, getting beaten up by a very strong puncher who wouldn't back off no matter what Victor did, and was clearly losing confidence. In the sixth round, when knocked down again, Ortiz rose to his feet and quit. After the fight, Ortiz said he had a lot to think about, and that he didn't "deserve" to be getting beaten up like that.

I don't want to focus much on that, though. This was a great fight, which has become overlooked since Ortiz did that whole song-and-dance afterward that left a lot of heads scratched and eyebrows curiously raised. Ortiz was in against someone who wasn't going to crumble and give up, leaving him to offer his smile and goofy quotes about Taco Bell after the fight. And he didn't impress too many with how he handled it.

Facing old friend Diaz at a 144-pound catchweight, Ortiz looked tentative, but did eventually do the deed. Diaz wasn't a bad comeback opponent, one good enough to get him televised on the Malignaggi-Diaz II undercard in Chicago anyway. Victor's performance lacked spark, but it was good for him to get his sealegs back. Whether or not they're TRULY back will be found out sometime this year, I suspect. Maybe not on Saturday, but we'll get to that later.

A Fight Night Club B.S. mismatch. Alatorre was toyed with for nine full rounds and then Ortiz turned off the lights when he felt like it in the 10th. The Golden Boy shills on commentary tried to explain this away as "needing rounds" or whatever, but the truth is Alatorre was such a poor opponent that it's not like Ortiz learned anything new with this. Ortiz was well past the Alatorres of the world years ago. He probably has gotten better work than this in sparring for at least his last five or six fights.