On Saturday, two televised shows feature four fights we'll preview in this one post. Nothing is three.

Let's just get to it. 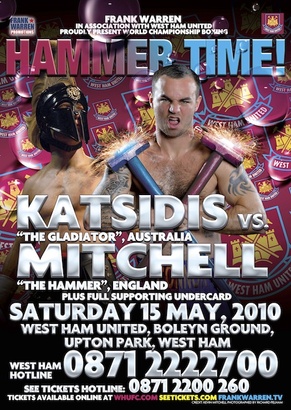 This fight could go a couple ways. It could be a war, a thriller with Katsidis attempting to impose his will on Mitchell. If he succeeds in imposing his will, that's what type of fight it will be, and it will favor Katsidis.

The other one is not quite as promising. Mitchell is no dummy in the ring. He knows what Katsidis is and what he isn't. He knew exactly what Breidis Prescott wasn't, and he used that for a routine 12-round decision win. He never let Prescott do much of anything. If Mitchell doesn't get caught up in the heat of the moment, that's what type of fight this will be, and it will favor Mitchell.

Kevin Mitchell almost became something of a forgotten young UK fighter. As Amir Khan rose, Mitchell got hurt and sat out a year, then returned with two gimme fights before delighting the people who still thought Prescott could fight with his "surprisingly" easy win over the Colombian.

This fight has Mitchell in the broad spotlight for the first time. He's main eventing on West Ham's football grounds, against a known international fighter who gave UK fans quite a show a few years ago when he put an effective end to Graham Earl's career in London.

Mitchell is a good fighter, though, a top ten guy at lightweight along with Katsidis. What's bothersome is that the 25-year-old Dagenham native is taking a major step up in class. I know Katsidis is no exemplary practitioner of the sweet science, but what he does well, he does very well. He can take shots with the best of them -- he was caught cold and jumpy in the first against Casamayor, and wide open in the 10th. He's learned from that. He took hard, clean shots from Vicente Escobedo without taking a step back in his last fight, and Escobedo is a lot better than he's given credit for when it comes to this fight.

It's a toss-up fight, which is why it's a good matchup. The man who executes his plan best (if it's the right plan) will win this fight, most likely. The backup is the comeback ability. If Katsidis is executing his plan well, can Mitchell still win? If Mitchell is boxing Katsidis' ears off, can Katsidis still win? Mitchell would have to outbrawl Katsidis and perhaps hope for a cut stoppage. Katsidis would just have to be Michael Katsidis and look for the home run, or at least an accumulation of doubles that score enough runs for a mercy ruling.

I slightly favor the Aussie in this one. Katsidis TKO-11

The main co-feature to Katsidis-Mitchell will be the mildly-anticipated fight for the British heavyweight strap between veteran Danny Williams and upstart villain Derek Chisora. This was supposed to be (again) Williams against Sam Sexton, but Sexton pulled out. Williams (41-8, 31 KO) hasn't fought since losing a three-rounder in Prizefighter against Carl Baker last October, a fight he likely would have won over a longer distance, given Baker's general fitness level. But Williams went down twice in the opening round of that fight, and really can't blame anyone but himself.

Chisora (12-0, 7 KO) has been mowing through opposition, including Sexton and, in his last fight, Baker, whom he stopped in two rounds. Every time I fully count out Danny Williams, he surprises me. So I don't think he has no shot. But I'm going with the younger, more determined, more ferocious Chisora. Williams in interviews sounds like he's already retired for all intents and purposes, planning his post-boxing career and saying this is his last fight. Chisora's going to hit him, and I don't know that Danny has much left to fight back when it gets going the wrong way. I could see Williams sparking Chisora early in this fight and winning that way, but that's about it. Chisora TKO-6

Editor's Note: Danny Williams weighed in at 275 pounds, so make it Chisora TKO-4. 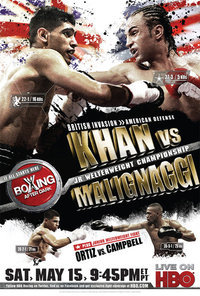 In all the talk of this fight and what favors which man, and the back-and-forth in the press, and Paulie playing the "overlooked" card again, and Khan being a guy who sends his schlong to models via text message (allegedly), I'm most interested to see something that hasn't come up much.

I think the biggest test for Khan (22-1, 16 KO) in this fight is going to be his speed. He's got fast hands, but those fast hands have been shown against Andriy Kotelnik, Oisin Fagan, Marco Antonio Barrera, Graham Earl, Dmitriy Salita, Martin Kristjansen, Gairy St. Clair, Willie Limond, etc.

In short, not a bunch of speed merchants or guys who truly specialize in the defensive side of the game.

Paul Malignaggi (27-3, 5 KO) might not be among the very fastest guys in the sport, but he's got some speed, and when he's focused, he's really good defensively. Khan's closest career comparable is Kotelnik. (Say that sentence out loud, it's fun.)

Kotelnik, while intelligent and technically sound, is not as good as Malignaggi is when Malignaggi is at his best, and there is no reason to believe that Paulie isn't coming to put on the best performance of his career. Let's face it, if Malignaggi beats Khan, he's in line for another money fight. His career seemed possibly OUT of money fights after the Hatton drubbing, when everyone went, "He's good, but there's only so much he can do, and I think we've seen it all." The Juan Diaz fights rescued his career from the brink. A win over Khan, which would ruin big Golden Boy and HBO plans, would be huge for him. He'd then be in line to fight guys like Tim Bradley and Devon Alexander (where Paulie would be the drawing card), and even continue to have that outside shot at a REALLY big fight.

On the other hand for Malignaggi, a convincing loss to a young kid with an already infamously weak chin would hurt a lot. He has a lot to gain and lose on Saturday. So does Khan, of course, but Khan's weaknesses are not really something he has full control over. Malignaggi has only looked iffy in fights when it seems like it was something mental more than physical, or he was just beaten by better fighters like Cotto and Hatton.

So, speed. I don't doubt that Khan is faster than Paulie, but I do wonder if he's so much faster that Malignaggi can't handle it. Paulie has a really good chin and is not going to be afraid to get hit by Khan, I don't think. Really, I could see this turn into quite a spirited battle, if something of a pillow fight. Malignaggi's good chin negates some of Khan's power, I believe, and Paulie's fragile hands and complete lack of power do negate Khan's awful chin to some degree.

I really think the outcome of this fight depends mostly on Malignaggi. If he puts on a great performance within his known limits of performance, he's going to win. Khan isn't going to blast him out in one or two rounds, and Malignaggi isn't going to give up like Kotelnik more or less eventually did. So Khan is more likely to have to dig truly deep than Paulie is. But if Paulie isn't at his best, Khan will win decisively in a dull fight. I just have a feeling the Amir Khan train stalls out again, but I think this will be an entertaining tactical fight. Malignaggi UD-12

This isn't even really a crossroads fight. This is two guys on the brink who need something impressive, and bad. Nate Campbell (33-5-1, 25 KO) is 38 years old and looked slow and old up at 140 last time out. Victor Ortiz (26-2-1, 21 KO) is 23 years old and has major questions about his guts after the Maidana fight last year.

A lot of folks think Campbell is going to take Ortiz to school, and I can see why. He did it to Juan Diaz, and Ortiz has those fortitude issues lingering. But I hesitate to compare those fights for a few reasons:

Part of me thinks Ortiz could overwhelm Campbell early with his strength. At 140, Ortiz is very powerful, and you can't ignore that. He also punches with pretty good accuracy and is a southpaw. But I hesitate there because:

I do expect Ortiz will come out full of piss and vinegar despite his tentative nature against Antonio Diaz and that joke of a fight with Hector Alatorre. But I also expect Campbell to do everything he can to disrupt Ortiz, even if he has to make it ugly and hold a lot. If Campbell can get Ortiz to expend too much energy looking for the early KO, look for the veteran to start leaning on Ortiz and banging to the body.

If the fight doesn't go how I think it might, and Ortiz comes out unsure of himself, Campbell will just win. It's actually my head telling me not to bet on old man Campbell here, that Ortiz is too young and has too many skills, and that he hits too hard for this fading version of "The Galaxxy Warrior" to handle. And it's my heart telling me that Ortiz has pretty much always been overhyped, a talented boxer whose heart might not really be in it enough when the smiling and the goofy quotes fade, and he's up against a man who isn't going to roll over the way guys like Jeff Resto and Mike Arnaoutis did. I'm going with heart, 'cause f**k it. Campbell TKO-9