Poll: How do you feel about Vazquez-Marquez IV?

Share All sharing options for: Poll: How do you feel about Vazquez-Marquez IV? 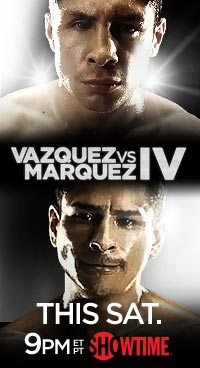 This Saturday's fourth fight between Israel Vazquez and Rafael Marquez is an interesting one, but perhaps for the wrong reasons.

You can go back to our coverage for the very first fight in this trilogy, back when this site was in the embryonic stages. I actually credit the Vazquez-Marquez trilogy with a lot of why this site has grown. For me personally, boxing was a passion of mine and I was a huge fan, but I was unsure if I could really run a boxing blog full-time. (Don't tell the guys I talked into letting me have this blog I said that.)

But those fights ... I knew this was the sport I wanted to focus on if I was going to blog about a sport. The trilogy was that reminder that sometimes, boxing forms a perfect storm that no other sport can touch, stirring the echoes of the past brilliantly and setting new standards at the same time. Israel Vazquez and Rafael Marquez were two of my favorite fighters before the first bout, which was at the time the one fight in boxing I most wanted to see. Marquez was dominant at 118, Vazquez an unbelievable thrill-show at 122. There was no way they could have a bad fight.

They had a great fight. Then a greater fighter. Then an even greater fight, decided in the waning second with a Vazquez knockdown of Marquez. It is incredibly rare to find two fighters who mesh so amazingly as these two have. Both with indomitable spirit, serious power, and excellent skills. They're fast, powerful and accurate. And neither one of them will quit unless they have no other option, and when they do -- as Vazquez did in the first fight -- they want to avenge that and prove it to be the exception, not the rule.

They are fighters who even in the shop-worn state they're both in, we know they'll leave whatever it is they have left in the ring.

Israel Vazquez is my favorite of the active fighters. The man is just incredible to watch perform. He's had similarly great wars with Jhonny Gonzalez and Oscar Larios, though obviously his name will always be tied first and foremost to Rafael Marquez. When Marquez was at 118, I thought the only better P4P fighter in the world was Floyd Mayweather. And both Vazquez and Marquez stayed in my top ten until well after the third fight, when it started becoming clear the toll the trilogy had taken on both.

This Saturday, we're not going to get the sort of fight they put on before, I don't think. Marquez fought once last year, mowing down a foe in Mexico. And Vazquez came back a few months later, looking (much to my chagrin) very normal and very beatable against a guy that he would have banged out in just a few rounds before.

Vazquez's right eye is not in good shape these days. Take a look at a photo of the man and it's clear. He's had three surgeries on that eye. Marquez is not who he used to be either.

Yet I'm excited for the fight. I fear, in a way, for the health of the fighters, but this is part of boxing, and if Vazquez is passing medical exams, he's able to fight. I do know some are not so excited for the fight, so where are you at? Is this a "too much" sort of thing for you, or are you glad to see them back together again?