Giving Juan La Porte His Due

Share All sharing options for: Giving Juan La Porte His Due 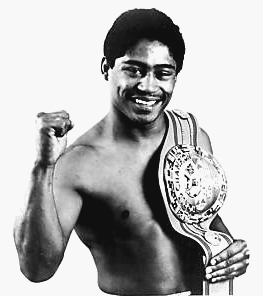 Bad Left Hook welcomes Ted "The Bull" Sares back to the front page with a piece remembering one of the great Puerto Rican fighters, Juan La Porte.

Old school is a slang term referring to a way of thinking or behaving in the past within the context of current times. It is not meant to have a negative connotation; rather, it is often used to refer to a time of perceived higher standards or level of craft. Some might equate the term to "They just don't make 'em like that anymore," or "He is a throwback," or "Back in the day." No one can really pin down the meaning, though.

In boxing parlance, it's like referring to a Gene Fullmer, Carmen Basilio, or Tony DeMarco. When someone refers to the late Arturo Gatti as "old school," they may be comparing him to Fullmer, Basilio, and DeMarco (or maybe Danny "Little Red" Lopez). They were humble outside the ring but ferocious and vicious inside. Courageous, respectful, and hard working-these behaviors reflected the values that existed in the 1940s and 1950s. The men were hard and determined, well schooled with great fight teachers and trainers, and had far more fights to stay sharp.

Many boxers fought 75 to 100 fights for egg money. Back then, you watched Jake, Sugar Ray, the Brown Bomber and the "Keed" on the Gillette Cavalcade of Sports on 9 inch Admiral TV sets with clamp-on magnifiers full of oil to bring it up to 13 inches. You rooted for blue collar Chico Vejar and hated college boy Chuck Davey. But the specter of boxing changed on March 24, 1962, when Emile Griffith met Benny "Kid" Paret in New York City's Madison Square Garden. It was bad juju to the Max. But boxing survived.

Later, you watched the big boppers during the Golden Years of the Heavyweights in the 70s. Man, they were three deep back then. Ali, Frazier, Foreman, Norton, and Holmes were traveling on a road to Canastota. The 80's provided the great mid-weight fighters like the new Sugar Ray, Hagler, Hearns, and Duran. But the U.K. had their own ferocious guys like Benn, Watson, Thompson, Eubanks, and Nelson. These guys traveled on their own special highways and they traveled fast. And they had their own unofficial super tourneys.

But not all fights were watched in the Olympic, the Forum, MSG, Wembley, Nynex Arena in Manchester, Roberto Clemente Coliseum, the Chicago Stadium, or in some luxury hotel in Las Vegas. More often than not, you enjoyed boxing in beer-drinking, hard-rocking, blue collar halls like the Roxy in Boston, the Ballroom in Baltimore, or at some fairgrounds, union hall, or sporting club in Illinois, Ohio, or North Jersey.

As boxing evolved from the 60's, there was one fighter who duked from 1977 to 1999, but unlike many others of his time, he fought and behaved in the old school manner. He fought often and won often, and he fought the very best. With a fast starting, furious style reminiscent of fighters from another era, he toiled in several different countries and in 14 different states (from New York to Kansas to California and many stops in between), this native of Guayama, Puerto Rico but raised in New York City was never knocked off his feet. He finished with a 40-17, losing his last two by razor thin and controversial SD's.

In 1984, after many bad breaks, he forced Colombian Mario "Martillo" Miranda (19-0) to quit on his stool in Madison Square Garden and captured the vacant WBC title. It was another real-life "Rocky" story. He defended his title twice against the rugged Ruben Castillo (56-3-2) and Johnny De La Rosa (22-0) and won both, but the lost it to the legendary Wilfredo "Bazooka" Gomez (40-1-1) in 1984. The Bazooka shot down 42 of his 44 opponents by KO. LaPorte and Rocky Lockridge were the only two who took him to the distance (except for those 3 who beat him and one Jacintos Fuentes who held him to a draw in his very first pro fight).

Yes, Juan La Porte faced them all; in fact, many observers thought he had done enough to beat the great Julio Cesar Chavez (53-0 at the time) in 1996, but he lost a majority decision in a hotly fought contest for Chavez's WBC World Jr. Lightweight Title.

An Act of Kindness

In 1989, his son sadly passed away in a drowning accident. Juan buried his title belt along with his son. Upon hearing this, WBC president Jose Sulaiman sent him a new world title belt to show him support and respect from the boxing community.

The affable and humble LaPorte retired in 1999. He never had a bad word for his opponents nor did he engage in trash-or smack talk. He was a positive influence who was and is the essence of class. He now trains youngsters in the Bronx, and works with the city of New York's athletic department.

Old school was a behavior influenced by the morals and values of another era. Times change, and so does the behavior behind those values, but not necessarily for the worse. Still, when someone calls me a "throw back," I like it. I have a hunch Juan would like it as well.