Share All sharing options for: Froch-Abraham moved to September

The tentatively scheduled August 21 Super Six World Boxing Classic bout between Carl Froch and Arthur Abraham has been moved to September, as Froch needs further time to heal from scrapes suffered in his April 24 fight with Mikkel Kessler, according to The Nottingham Post.

I'd guess there's a chance Showtime will once again try to schedule a double-header, with Froch-Dirrell on tape delay from wherever the fight winds up, and Andre Ward facing Andre Dirrell live in the second fight. Ward-Dirrell is currently slated (again, tentatively) to take place on September 25.

As for the location of Froch-Abraham, Switzerland has been the rumored focus of late. Go figure, everyone wants neutrality and Switzerland is in the running.

But we again plead with the promoters, both from Hennessy Sports and Sauerland Event, to consider the Principality of Sealand. I mean really, think about it. A world-class fight taking place here: 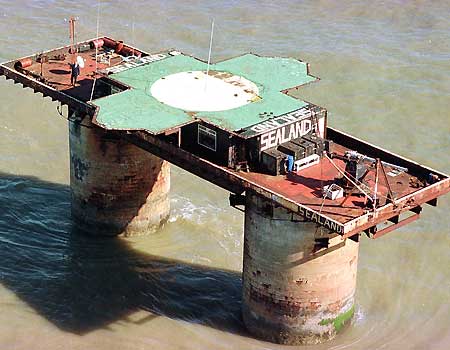 Would this not be tremendously great? There'd be nothing else like it in all of the sports world. I know for a fact that Prince Michael of Sealand has interest. The atmosphere could be fantastic and the surroundings completely unique. And if you're talking neutrality, well, Sealand has zero ties to either fighter, either promoter, or anyone else in boxing.