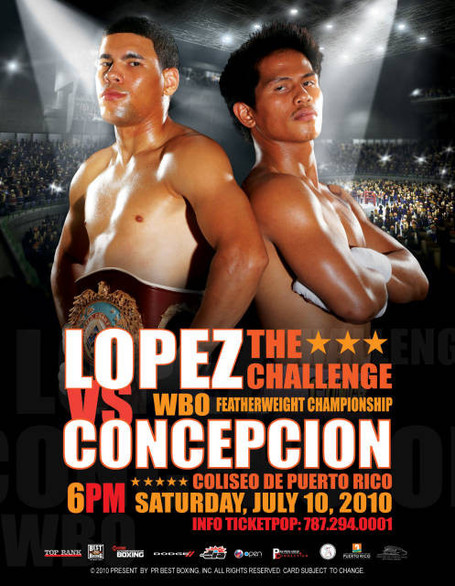 Tonight on Showtime, Juan Manuel Lopez will put his featherweight alphabet title on the line against Filipino challenger Bernabe Concepcion, and Nonito Donaire will fight for the final time (reportedly) at 115 pounds against Hernan Marquez. Let's take a look at both fights.

I am not going to fluff this up and try to get anyone excited about a compelling matchup. Though I have both of these guys rated in the top 10 at 126 -- Lopez second, Concepcion eighth -- there is a gulf of difference in their abilities. Lopez is truly at the top of the weight class, while Concepcion, simply put, is not. Concepcion is closer to whomever I might rank No. 20 or so than he is to Lopez, in my view, and I think this fight will prove that.

It's not that Concepcion (28-3-1, 15 KO) is such an awful challenger for Lopez's belt, but he's a program challenger. Top Rank is building, they say, to a 2011 bash-em-up between Lopez and Yuriorkis Gamboa, and Concepcion is simply a piece of meat in their stable that they're going to feed to the big dog.

Two of Concepcion's three defeats came very early in his career, at the ages of 16 and 17. He's still only 22 and has developed into a solid, if totally unspectacular fighter. I don't think he has the speed to keep up with Juan Manuel Lopez, even though Lopez himself has appeared a bit more sluggish in recent fights than he did when he was blasting through the ranks on his way to a TKO-1 of Daniel Ponce de Leon.

They have a common opponent: Steven Luevano. In August 2009, Concepcion and Luevano put on a deadly dull fight that ended in a Concepcion DQ loss. In January of this year, Lopez fairly well dominated Luevano and stopped him in the seventh round in Lopez's featherweight debut. It was a great rebound win for Lopez, who had fought very stupidly against Rogers Mtagwa last year, nearly getting himself knocked out against a brave but one-dimensional brawler in a fight Lopez should have won handily.

Lopez cannot afford to just look past Concepcion, of course. Bernabe is good enough to beat an unfocused Lopez, or a Lopez who just isn't there mentally. If JuanMa makes the mistake of assuming this fight is as easy as I think it is, he could find himself in some trouble. Mtagwa pushed him to the brink and Concepcion is a lot more talented than Rogers is, so we've seen Lopez take himself out of his gameplan before.

But I suspect Lopez is going to be on point. For one thing, he'll be fighting in San Juan as the new major star of Puerto Rican boxing. Miguel Cotto is still the king of the island's pugilists, but he's making his way down the other side of the mountain at this point, while Lopez, at 27, is just entering what should be his true prime. He's going to want to impress the Puerto Rican boxing fans in attendance and make his case for being their top man.

I hate to assume, but it's not me in the ring, so I'm going to briefly "look past" this fight. Should Lopez win this bout, it appears certain that he will face Rafael Marquez this fall. I like the chances of both guys in that fight, to be truthful. I'm a big fan of both and think they might dovetail perfectly in the ring and give us a great fight for however long it lasts. Marquez is a lot more ferocious than anyone Lopez has fought to date, and even up past his best weight at 126, probably the best puncher that Lopez will have fought by then. I don't think he looks too badly damaged from the Vazquez series, all things considered. The younger man would be the favorite, but I actually do like that fight a lot.

After that, assuming Yuri Gamboa gets by Elio Rojas in September, maybe we get Lopez-Gamboa in the first quarter of 2011. At that point all you'd have left is Chris John (who is not going to fight either of them) and Celestino Caballero (who neither of them are going to fight). There'd be no more "making it bigger." It would be ready to go.

Anyway, I don't expect much drama in this one. Lopez TKO-7

Donaire's Ring P4P ranking aside, he's a hell of a good fighter. It was no fluke that he kicked Vic Darchinyan's ass, because he did it for four-plus rounds before knocking him silly. And since then he's mostly ripped the guys he's fought, they just haven't been marquee fights, and we've all wanted the Darchinyan rematch to come about, and it never has, and so on and so forth. Donaire probably doesn't deserve to be considered the fourth-best fighter in the world P4P (I'd argue that it's ridiculous and lazy ranking), but it's hard to call him overrated. A couple of those non-marquee wins -- Moruti Mthalane and Raul Martinez -- really were good wins, but they weren't great.

Hernan Marquez (27-1, 20 KO) is also not a great opponent. At 21, he's cut his teeth in the Mexican rings, with his best win probably being Juan Esquer, but he lost his last fight to Richie Mepranum in Texas and I don't see what Top Rank believes is useful about this matchup. There are a ton of guys who'd have been happy to fight Donaire, but instead they're choosing to protect him. I am trying to not insult Hernan Marquez, but he doesn't deserve this fight. Nonito Donaire is beyond this level of competition.

Honestly, I expect Donaire to tear through Marquez, who I'm sure will give it his all, the same way that Rodrigo Guerrero did against Darchinyan in March. Hopefully if the fight goes that direction, we won't have to watch Marquez get his brains rattled around for 12 full rounds the way Guerrero did. The only little tick in this could be that Donaire had some trouble making weight again, but really it would appear he's so much better that that shouldn't make much of a difference. Donaire TKO-5