Share All sharing options for: TV and Internet Fight Schedule - Weekend of July 16 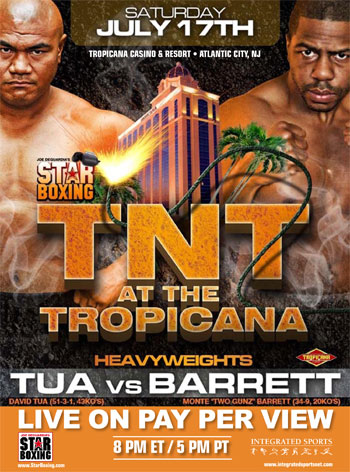 Sky Sports (UK). 5:00 p.m. Eastern, Matthew Hatton vs. Yuriy Nuzhnenko, Scott Quigg vs. Gavin Reid.  For everything that Ricky's brother gets for not being particularly talented, this fight for the European welterweight title is actually extremely evenly matched and may end up being the fight of the weekend.  Nuzhnenko is a former paper titlist who was ridiculously gifted a title while Miguel Cotto was the real titlist.  Both fighters are limited but try hard, and you could see a fair amount of trading going on.  Quigg is one of the better UK prospects out there.

ESPN2, 9:00 p.m. Eastern, Zab Judah vs. Jose Armando Santa Cruz, Sadam Ali vs. Julius Edmonds.  For a while, there was an argument as to whether Santa Cruz should be considered the lineal lightweight champion of the world. When Joel Casamayor held that title, Santa Cruz convincingly beat him on the Cotto-Mosley undercard, but was robbed on the scorecards.  A year later, that talk ended when he was knocked out by Antonio Pitalua.  Now he's up at welterweight for a catchweight bout with Brooklyn star Judah, who's 4-4 since 2005, with all four losses coming to premier opponents and all four wins coming against, uh, less than premier opponents.

Showtime, 11:00 p.m. Eastern, Fernando Guerrero vs. Ishe Smith, Shawn Porter vs. Ray Robinson, Lanard Lane vs. Mike Dallas Jr. Guerrero will face his toughest test to date (and a link of direct comparison to fellow prospect Daniel Jacobs) in former Contender contestant Smith.  Smith is a good boxer and very tricky, but tends to make for boring fights where his opponent doesn't look good, so it will be a big positive for Guerrero if he can win without it getting too ugly.  Porter, who fought at 165 in the amateurs despite his 5'6" frame, will take his first fight at welterweight against Robinson, a prospect who recently had his bubble burst.  Porter hasn't looked that great since moving down in weight, so he has something to prove.  Lane vs. Dallas might be the most intriguing of the bunch.  It's one of those rare prospect-prospect matchups between two guys with potential about 12 or so fights into each other's careers.  While "fighting fireman" Lane is the guy with the promoter putting on the card, Dallas might well be the favorite in this one.

Integrated PPV, Maori TV (New Zealand), PCS TV (Samoa), 8:00 p.m. Eastern ($29.95), David Tua vs. Monte Barrett. After fighting complete bums for about six years, Tua is finally active and in much better shape and has been fighting guys who are a level or two up from being bums.  Barrett was a capable contender in his day, but if you were to build a fighter who David Tua should beat easily, he'd look a lot like Monte Barrett.  If Barrett makes it to the third round, he should consider it a moral victory.  There are undercard fights, but nothing really worth mentioning.

HBO, 9:45 p.m. Eastern, Timothy Bradley vs. Luis Carlos Abregu, Alfredo Angulo vs. Joachim Alcine.  This one is mostly a stay busy fight for Bradley, who at one point was supposed to face the more compelling Marcos Maidana, although the undefeated Abregu does present some challenges.  First, this would be Bradley's first fight at welterweight.  Second, while Abregu's defense is leaky, he's a good offensive fighter who can crack a little, and Bradley's chin is on the suspect side, so it could be a fun fight.  Alcine once won a title at 154 during a period of time when the division was weaker than it is now.  It's a boxer vs. swarmer matchup, which is similar to what we've seen from Angulo his last few fights.  Bad Left Hook will have live round by round coverage of this card.

Fox Sports Net / Fox Sports Espanol, Azteca (Mexico), 10:00 p.m. Eastern, Fernando Montiel vs. Rafael Concepcion. Until a few days ago, Montiel was slated to face Eric Morel, although the teak tough Concepcion isn't much of a downgrade from that. Still no official word on what the undercard is supposed to be for this one, although it was originally supposed to be an Alfonso Gomez fight.