Share All sharing options for: TV and Internet Fight Schedule - Weekend of July 23 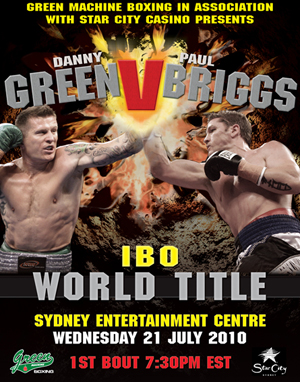 It's a relatively light week in terms of big fights (with little to nothing going on Saturday), but don't sleep on this weekend.  At least two smaller fights have a lot of promise to be entertaining slugfests.

Main Event PPV (Australia), 5:30 a.m. Eastern, Danny Green vs. Paul Briggs, Shane Cameron vs. Daniel Ammann.  This might be one of the best fights that can be made in Australia, although it's probably coming a few years too late.  The two men had the opportunity to fight each other in 2007, but both instead retired.  Green came out of retirement a year and a half ago, nominally fighting at cruiserweight, and has run off a series of wins over old former titleholders, including Roy Jones Jr.  Briggs only fought once since losing a close brutal war to Tomasz Adamek at light heavyweight, and will be fighting for the first time since early 2007.  Ring rust may be a factor, but if both men are on their game, they're both fighters who aren't afraid to mix it up and like to come forward.   There are a number of undercard bouts, so the main event will probably start about two to two and a half hours after the start time listed above.

Fox Sports 2 (Australia), 5:30 a.m. Eastern, Lenny Zappa vs. Billy Sumba, Will Tomlinson vs. Junmar Dulog. Zappa is coming off a close call win that he probably deserved to lose against Fernando Angulo.  He'll bounce back against Indonesian Sumba, who has a pretty 18-1-1 record, but has never actually beaten anyone with more than four career wins.  Tomlinson is a top Aussie prospect, but he's facing even weaker Indonesian competition.

Sky Sports 2 (UK), 5:00 p.m. Eastern, Stuart Hall vs. Martin Power, Dean Harrison vs. Nigel Wright.  Hall and Power will fight for the British bantamweight title, while Harrison and Wright will face off for the English light welterweight title.  The card is a bit weak, but originally it was supposed to be headlined by Jason Booth vs. Steve Molitor.  Prospects Tony Jeffries and Jon Lewis Dickinson fight on the undercard, so hopefully there's enough time to show some of their fights.

ESPN2, 10:00 p.m. Eastern, Beibut Shumenov vs. Vyacheslav Uzelkov, Gayrat Ahmedov vs. Dallas Vargas. Don't get scared of all the Russian sounding names - this should be a good one.  Shumenov rose to prominence by taking on solid opponents right out of the gate, earning a title shot in his 9th pro fight.  While he lost to Gabriel Campillo on his home soil, he was able to 'win' a title by 'defeating' Campillo in the rematch in what was the robbery of the year so far.  Uzelkov has beaten Campillo for real, by knocking him out.  Both guys like to move forward, throw lots of big punches, and eat lots of big punches.  It could be a slugfest, and one where Shumenov is the underdog to keep his belt.  Ahmedov is an undefeated light heavyweight who is promoted by Shumenov, and is getting his stiffest test to date in Vargas.

Telefutura, 11:30 p.m. Eastern, Craig McEwan vs. Danny Perez, Keith Thurman vs. Stalin Lopez.  This is probably the best installment of Tecate Solo Boxeo since Golden Boy revived the show at the beginning of this year.  McEwan is 18-0, but has been moving slowly under the tutelage of Freddie Roach.  Perez, a former title challenger who lost his last fight to Erislandy Lara, is somewhat of a step up.  Thurman and Lopez are both prospects, which could make for an interesting fight.  Lopez was a Cuban Olympian and could be primed for the upset.

Televisa (Mexico), 11:30 p.m. Eastern, Jhonny Gonzalez vs. Aristides Perez, Oscar Ibarra vs. Carlos Melo. Gonzalez is a rare beast, a great Mexican boxer with a rotten chin.  Since getting knocked out by Toshiaki Nishioka, he's come back with several solid wins and should add Perez to the list.  Perez somehow has a record of 17-2, but he lost his last fight to Eduardo Escobedo, and he was obliterated by Humberto Soto a year ago.  Just to show how low the WBC has sunk, Ibarra vs. Melo is actually for a WBC interim title (I ain't calling it silver), even though Ibarra has four losses without any wins of note, and Melo is basically a standard Mexican journeyman.  I suspect this will also be aired live on wbcboxing.tv.

MBS (Japan), 6:50 a.m. Eastern, Koki Kameda vs. Cecilio Santos, Daiki Kameda vs. Rosendo Vega.  For the first time in a while, Japan gets a Kameda doubleheader.  Koki will take on Mexican journeyman Santos in his first bout at super flyweight, as he begins his quest to win a title in his third weight class.  Daiki takes on Vega in a stay-busy non-title bout.  Hope that he comes out unscathed, as he's scheduled to defend his title against Takefumi Sakata in two months.

Elsewhere in the world of boxing....