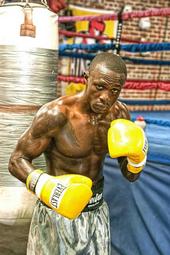 Demetrius Hopkins UD10 Mike Arnaoutis - Early in the fight, Hopkins dominated with his jab and the occasional right cross, and Arnaoutis once again looked a little gun shy.  In the middle rounds, Arnaoutis increased his output and started to get more aggressive, but Hopkins still did well with backtracking, especially since he started throwing longer combinations.  Towards the end of the fight, Arnaoutis started to land with more regularity, although he still wasn't as busy as Hopkins, and it was just too little too late.

Francisco Contreras UD8 Eric Cruz - Prospect Contreras came into the fight with 13 knockouts in 14 wins, but the sturdy Cruz was able to stay on his feet for the full fight.  While the powers that be are trying to build Contreras into a higher level prospect, there wasn't much about this performance that told me he could compete at the highest levels.

Joseph Elegele TKO3 Willie Walton - Elegele (pictured right) is potentially a more interesting prospect.  While he's not young, he's a six foot tall fighter who can make the junior welterweight limit, has long arms, is southpaw, doesn't look awkward, can put punches together and has decent power.  The biggest question is his chin - Walton rocked Elegele when he left himself open in the first round, although Elegele was able to recover and finish strong.

Jamie McDonnell TKO3 Rodrigo Bracco.  McDonnell defended his European bantamweight title.  McDonnell utterly dominated the fight from start to finish, and the referee stopped the bout after McDonnell badly staggered Bracco with body shots.  McDonnell improves to 15-2-1, a record that is somewhat deceptive since the losses and the draw all came against good domestic UK competition while McDonnell had less than 10 fights of pro experience.

Dominic Vea SD12 Oscar Siale.  Vea won a vacant Commonwealth crusierweight title with this one.  Rob Norton vacated his title as he did not want to head to Australia to defend the title.  Vea was badly cut in the first round, but managed to fight through it and make it to a decision.  Siale was a last minute replacement for Mohammed Azzauoi.

The super middleweight Prizefighter tournament was won by Patrick Mendy.  This came after the top three fighters all dropped out of the tournament, although at only 19 years old, Mendy actually has a chance to go somewhere despite his 8-4 record.  A good full recap of the card is available at Sky Sports.

Charlie Ota SD12 King Davidson - American expat Ota (nee Charles Bellamy) was able to defend his Pacific regional welterweight title by fighting a relatively defensive fight against the Aussie Davidson.  Sidney Boquiren, who's the man when it comes to English language reports of the Japanese boxing scene, has a great report of the full card at The Boxing Bulletin.