Allan Green-Glen Johnson on for November 6

Share All sharing options for: Allan Green-Glen Johnson on for November 6 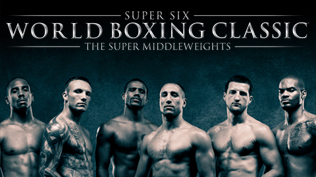 The proposed Super Six World Boxing Classic fight between Allan Green and Glen Johnson is official for the November 6 undercard on Showtime. Main eventing that night will be featherweights Juan Manuel Lopez and Rafael Marquez.

Green (29-2, 20 KO) entered the tournament as a replacement for Jermain Taylor in June, losing a virtual shutout decision to Andre Ward in Oakland. Green was sluggish the entire fight, clearly outclassed by Ward, and complained after of weight issues and overtraining for the bout.

Now he faces Johnson (50-14-2, 34 KO), a 41-year-old veteran who has not made the super middleweight limit in a decade. Johnson is the former world light heavyweight champion and a multiple-time titlist at 175. There are concerns about his ability to boil down to 168, or if he'll be effective when he does. At his age, fighters almost never go down in weight. In recent years, we've seen disastrous results for the likes of Oscar de la Hoya and Chris Byrd when attempting at an advanced age to move back down in weight, and Johnson is older than either of them were, with many more miles on the odometer.

But Johnson, who like Green is promoted by Lou DiBella (probably the biggest reason he's getting the shot), is confident he can comfortably make the weight, and is grateful for the opportunity.

"I want to thank Showtime for including me in their Super Six tournament," he said. "Having dedicated so many years to the sport of boxing, it is gratifying to still be considered worthy of competing with some of the top fighters in the world and on such a prestigious platform. ... I typically weigh in at 172 pounds for my light heavyweight fights. I will have no trouble making the 168-pound limit as a super middleweight."

To note, and facts being facts, Johnson has only weighed in at 172 or below for a light heavyweight fight three times since 2001, a span of 21 fights at the 175-pound limit. He does typically weigh in a bit under, but in recent fights has gone up dramatically in weight overnight, fighting in the 190s.

A knockout win for either Green or Johnson combined with a loss by either Carl Froch or Andre Dirrell would see the winner of this fight advance to the semifinals of the tournament.