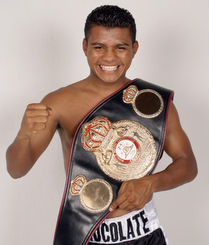 Roman Gonzalez KO2 Jesus Limones - "Tyson" Limones was just no match whatsoever for the undefeated minimumweight titlist Gonzalez.  Limones came out trying to apply as much pressure as Gonzalez usually does, but that's usually not a great idea against a murderous puncher like Gonzalez.  For the few minutes that it lasted it was a good bout, although Gonzalez floored Limores with a right hook near the end of the first round.  While Limones survived until the second, he was knocked down again in the second with a left hook that caught Limones flush during an exchange, seemed to decide that enough was enough, and stayed on his knee for the full count of ten.  Unfortunately, there isn't likely to be much of a challenge for Gonzalez for the time being.  105 is really a two-man division (as Oleydong Sithsamerchai once again proved - see result below) between Gonzalez and Nkosinathi Joyi.  It would be a great clash of styles, and possibly the most significant fight in the history of the weight class, but it will never happen.  There's zero money in a fight between a Nicaraguan and a South African, and with both men holding belts, they'll never be obligated to face each other.

Jose Alfaro TKO2 Joel Juarez - Mexican journeyman Juarez was hapless against former titlist Alfaro, who himself has become somewhat of a journeyman these days.  In a return to lightweight after fighting Erik Morales at welterweight his last time out, Alfaro applied constant pressure and managed to land shots nearly at will.  He scored knockdowns in both the first and second rounds, and they were nearly mirror images of each other - he backed Juarez into a corner, let a body shot rip, and Juarez fell to his knees.  After the second knockdown, the referee had seen enough and the fight was over.

As an aside, one would think they could get a better venue for a decent sized card like this in a country where boxing isn't completely unpopular.  The bout itself was in a hotel conference room, no lie, and about 2/3rds of the advertisements were merely to extol the virtues of a united Nicaragua.

Oleydong Sithsamerchai D12 Pornsawan Por Pramook - In an all-Thai battle for Sith Lord's minimumweight title, unheralded Por Pramook, who was 2-3-1 in his last six and lost a wide decision to Sithsamerchai in late 2008, gave Sithsamerchai all he could handle.  According to reports, Pornsawan just looked like the fresher fighter, and was able to dominate at times, including knocking down the undefeated champion in the sixth.  When the decision was announced as a draw, the local crowd booed.  Despite his 34-0-1 record and being only 25 years old, Sithsamerchai has severely struggled in all four of his last title fights, not always against splendid competition, and may be in trouble when he needs to face his mandatory Donnie Nietes in the upcoming months.

Vladine Biosse UD8 Ibrahim King - A couple months ago, Friday Night Fights fans were treated to an exciting bout between undefeated prospect and former football standout Biosse and Joey McReedy.  Tonight, it seems that fans were treated to another good one.  Once he steps up his level of competition, we'll get a better feel for whether he's actually an exciting fighter or if he's just not good enough to not struggle against middling competition.