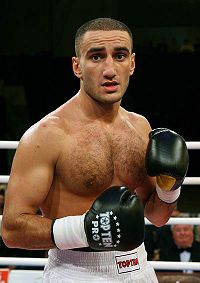 The first televised fight today from Germany is sure to get old feelings on boxing judging in the country riled up yet again, as gutsy home fighter Karo Murat was lucky to escape with a draw against Spain's Gabriel Campillo in a battle of light heavyweight contenders, a rematch of a 2008 fight that Murat won a bit controversially that time, too.

The fight had plenty of grit from both men after a slow start. Murat may have banked the first three rounds, but after that Campillo got into a really good rhythm and was able to use his jab and some activity and pressure to largely neutralize Murat, who too often reminded of Arthur Abraham with his gloves up high and little coming back.

There was a lack of clean punching throughout the fight, but the pace was solid and there wasn't much by way of resting. Murat (24-1-1, 14 KO) was visibly exhausted by the middle rounds, with the unseasonably hot weather in Germany being much to blame, as BoxNation's Steve Bunce made clear it was very warm in the building, particularly in the ring under the lights. But the German banger kept coming forward, and swung for the fences in the late rounds, hoping to rally against the more relaxed, largely in-control Campillo (21-3-1, 8 KO).

For Campillo, it's another in a long line of bad breaks, bad luck, or whatever else you want to call it. It's hard to be upset with Murat, though; he fought his heart out and hurt Campillo in the 12th round, throwing bombs and trying to win the fight. When he was out of gas, he kept going and firing what he had left.

Our live coverage continues, with the IBF cruiserweight title fight between Steve Cunningham and Yoan Pablo Hernandez next, followed by the Sylvester vs Proksa fight for the vacant European middleweight title.