Pacquiao vs Marquez: Is There Any Difference Between Tomorrow's Marquez and the Version That Faced Floyd?

Share All sharing options for: Pacquiao vs Marquez: Is There Any Difference Between Tomorrow's Marquez and the Version That Faced Floyd?

Earlier this evening during the weigh-in, I think my mind played some tricks on me. I think that may be the case for a lot of folks.

I thought to myself, watching it live on HBO, that Juan Manuel Marquez, at 142 pounds, looked somehow different than he did in 2009, when he weighed the same before an embarrassing showing against Floyd Mayweather Jr.

Thinner, I told myself, and leaner, and more muscular, perhaps.

But looking back and comparing, Marquez really doesn't look any different today than he did on Friday, September 18, 2009, and compared to the ripped and ready Manny Pacquiao, the lightweight champion still looks overweight and flabby fighting this high.

After the jump, a comparison of photos: Today's Marquez vs 2009 Marquez. 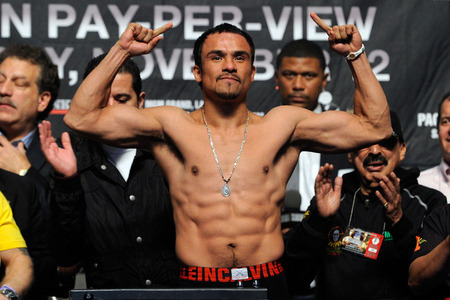 That's Marquez as he looked today. Here's Marquez at the weigh-in in 2009 before facing Mayweather:

Any differences are minor, I believe. He may have just a bit more definition in his abs, but the lighting is also different in the two photos, and while his face looks thinner this time, that could just be the goatee.

But the real key is this: Pacquiao isn't Mayweather, and won't make Marquez chase. Juan Manuel won't look as bad as he did against Mayweather, and another key will be his overall conditioning, and whether or not that's better this time out. His training techniques and focuses have been different this time around, as he's added a strength and conditioning coach, and hasn't focused so much on raw power. Against Floyd, his strategy was straight out of Rocky Balboa. "Let's build some hurtin' bombs!" It didn't work, and he was way too slow, along with being too small, which is a horrible combination. If he's retained more of his speed this time, he'll be as good as he can be at this weight, at age 38.