Share All sharing options for: Khan vs Peterson: Timothy Bradley Emerges As Big Winner After Upset

There is a lot to be said about last night's fight between Amir Khan and Lamont Peterson, in which Peterson scored one of the biggest upsets of 2011 with a split decision win that has sparked plenty of debate.

Was the referee to blame? Amir Khan thinks so. Will there be a rematch? Lamont Peterson says bring it on.

Some scored it for Peterson. Some for Khan. And many do feel that referee Joe Cooper was too much of a factor, and he was, in plain fact, the ultimate factor with two point deductions against Khan that gave Peterson two scorecards on 113-112 marks.

Peterson obviously was a big winner last night. He proved himself again as a world class fighter, in what was his best performance to date. Khan took a bit of a hit, but that may calm down some when people have time to digest it all and realize that the Brit once again provided an entertaining fight.

But the biggest PR winner last night wasn't in the ring. He was likely at home in Palm Springs, California. Maybe he watched the fight. Maybe he didn't. Fighters are a peculiar sort -- they don't care as much about what's going on in boxing as us crazy fans do, at least usually. Sometimes they skip fights.

Timothy Bradley was last night's biggest winner in the grand scheme of things.

Bradley did not have a good 20011, all things considered. His year started with a miserable bust of a fight against Devon Alexander in Pontiac, Michigan, drawing few fans to the all-but-abandoned Silverdome, the one-time home of the Detroit Lions now too ragged even to host mediocre NFL football. But Gary Shaw wouldn't go to St. Louis, and Don King wouldn't go to California. So neutral ground was found, and a lousy fight bit the dust. For all the hype HBO tried to give the fight, it was a hit with nobody.

He had promised to fight Amir Khan on July 23. The date was booked. Everyone was ready to go. Bradley and Khan had all but cleaned out the division, and the only truly significant test left for either man at 140 pounds was a fight with each other.

Both talked the fight up. All that had to happen was Bradley beating Alexander, which he did, and Khan beating Paul McCloskey on April 16, which he did. They delivered, though not in fights that were exactly whetting the appetite of the public.

Still, the fight was happening. Everyone knew it. And then Timothy Bradley balked. I have said countless times that I understood Bradley's position. He was leaving his promoters, Gary Shaw and Ken Thompson. While some cried about him ducking Khan, these were often the same people who say that they understand boxing is a business. No decision was ever a clearer business move than this one. Bradley, closing in on his 28th birthday and having gone as far as Shaw and Thompson could take him, wanted to join a power promoter.

So he scrapped the date with Khan. Anyone who felt he should have taken the fight and then left Shaw/Thompson was missing much of the point: A date with Amir Khan would still exist later, and he wasn't interested in taking that big of a risk while preparing to test the free agent waters.

Unmanly? Sure, maybe. Taking risks is something boxing fans love to see, particularly in matchmaking, where it can be as rare as a four-leaf clover. But what Bradley did was understandable.

Still, he invited criticism in interviews. He did himself no favors.

Then he signed with Top Rank, largely with hopes of being lined up as a Manny Pacquiao opponent in 2012. Arum & Co. signed him up for a fight with Joel Casamayor, which they bitterly defended as a legitimate bout even though it wasn't even close, and Bradley got more flak for a mismatch and a terrible fight, which he dominated with ease against the shot Cuban on November 12, in the main support slot of the Pacquiao vs Marquez III show. 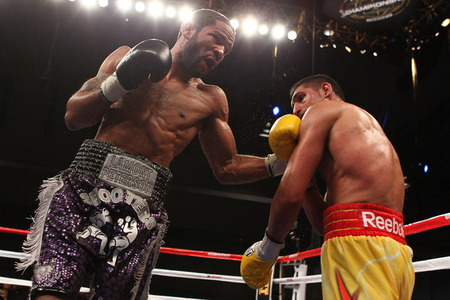 Attention in the junior welterweight division at this point was largely on Khan. Many had jumped Khan over Bradley, calling him the world's top 140-pound fighter. Last night, that all came crashing down -- against a fighter Bradley had beaten soundly and clearly two years ago, nearly to the day.

Lamont Peterson upset Amir Khan, and the arguments were over. Without question, the world's best 140-pound fighter is Timothy Bradley.

While many felt as recently as yesterday afternoon that Khan would defeat Bradley should they ever meet, it's hard to imagine anyone seeing it that way right now. Crafty Bradley may be no superstar, but he is a smart fighter, pressures well, and does all the things that give Amir Khan issues. Who would pick Khan over Bradley right now?

Amir Khan losing to Lamont Peterson, in a way, erased some of the poor press that Bradley had both fairly and unfairly received in 2011. As the calendar nears turning over into a new year, Tim Bradley is the top dog at 140, and there's nothing more for him to prove at the weight, really.

It was Amir Khan talking about moving up, chasing the big fights. He said he didn't need Tim Bradley. Now, Khan is no longer on the Mayweather radar at all. Now, he needs to rematch and defeat Lamont Peterson before he takes a next step to anything. Timothy Bradley doesn't need Amir Khan. He's free to go any which way he chooses, without criticism of a failure to fight Amir Khan.

Boxing is a funny sport where the biggest beneficiary of a fight can be a man who wasn't in the ring. There are no more arguments at 140. Tim Bradley is the man. And Amir Khan no longer has the ability to brush off Timothy Bradley in conversation, because Bradley is now a clear-cut level above him, at least for the time being. As much as anything, that has to sting Khan's ego, because he truly believes Bradley ducked him, even going so far as to tell Bradley to "grow some balls" when the two passed by one another at the Pacquiao vs Marquez weigh-in.

So congratulations, Timothy Bradley. Your biggest overall win of 2011 came last night, thanks to Lamont Peterson. After a rough year in the press, it's always good to put one in the win column, no matter how it happens. May your biggest 2012 victories be more your own doing, and come inside a ring that has you fighting.