Cotto vs Margarito 2: Weigh In Photos, A Comparison of the Main Eventers

Share All sharing options for: Cotto vs Margarito 2: Weigh In Photos, A Comparison of the Main Eventers

To note: No, we do not have any photos of Brandon Rios just yet. There should be some coming along shortly, and we'll get that up when they come in.

For now, let's take a look at the main eventers for tomorrow night's HBO pay-per-view card at Madison Square Garden. For their 153-pound catchweight fight, which will be for Cotto's WBA junior middleweight title, Miguel Cotto and Antonio Margarito weighed in at 152¼ and 152½, respectively.

After the jump, a comparison of the two and how they look heading into Saturday's highly-anticipated and controversial rematch.

First up, the challenger, Antonio Margarito: 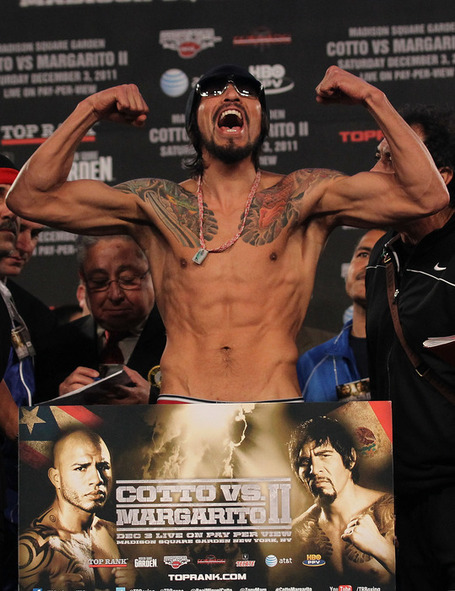 Margarito looked a bit thin for some tastes, but I remember how he looked as a welterweight, and to me, this seems about right. Last year against Pacquiao, even weighing in at 150, he seemed a bit too bulky to me. Here, he's lean, trim, and cut. Or at least that's how I'm seeing it. He doesn't seem dried out, doesn't look like he had to crash down at all. Just looks ready to go. 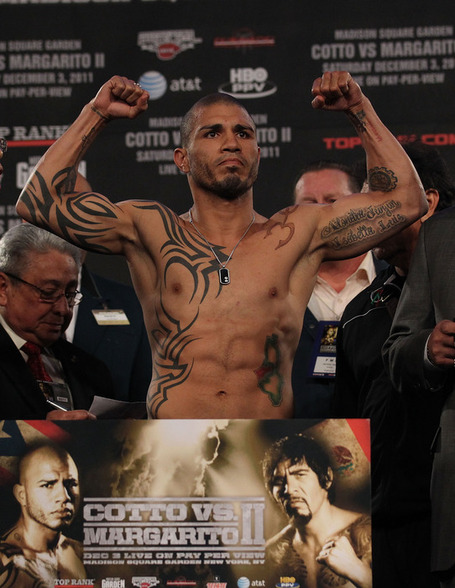 Cotto looks, well, like Cotto always looks. I've never seen him appear out of shape on the scales, though he does look a bit soft compared to his welterweight days, although that's to be expected given that Miguel is not at all struggling to make this weight limit, and that he's also not in his 20s anymore.

Who looks better, and does either man's photographed fitness level concern you?