Share All sharing options for: Helenius vs Chisora & Povetkin vs Boswell Fight Previews: Heavyweights in Helsinki

As a warm-up to tomorrow night's headline attractions on U.S. TV, you can do a lot worse than the heavyweight double-header in Helsinki, which will air in the States on Epix, and in the U.K. on BoxNation.

While this may not be the marquee type of fight that Povetkin's doubters, or even those just bored with his stalled pro career, may have been hoping for, there is good news: It's not Evander Holyfield on the other side of the ring, as apparently public interest wasn't high in Germany or anywhere else. That or Evander, now 49 years old, made his usual ridiculous demands and bobbed and weaved his way out of another rumored fight.

Who knows? More importantly, who cares?

Cedric Boswell isn't much younger than Holyfield. At 42, "The Bos" was born in Detroit as the 1960s came to a close, and lives today in Atlanta. Boswell turned pro in 1994, and was undefeated until being stopped in 10 by Jameel McCline in 2003.

That put Boswell's boxing career on hold, as he wouldn't fight again until 2006. He never figured to be a legitimate contender at that point, and in many ways, with all due respect, you might argue he still isn't.

But he's just kept on winning, often against the odds.

Boswell (35-1, 26 KO) doesn't really have a "defining moment," but the closest he might come is TKO-2 win in August 2008 over Roman Greenberg, a then-undefeated heavyweight who was picking up just a bit of press with a 27-0 record.

But Boswell still wasn't handed any opportunities. He tried to make some noise in the press, in the limited way that a fighter without a power promoter can, calling out anyone and everyone, from the Klitschko brothers on down.

Tomorrow, he gets his wish: A shot at a world heavyweight title for the first time, 17½ years after first turning professional, and over eight years after being stopped by McCline.

Standing in his way is Alexander "Sasha" Povetkin (22-0, 15 KO), a former Olympic gold medalist whose professional career has been a slow crawl to relevance, and then a fight to stay relevant despite twice flat-out ducking signed fights with Wladimir Klitschko.

Now trained by Teddy Atlas, in a partnership that may or may not be particularly beneficial (not knocking Atlas, just saying there's been no concrete evidence that tells us he's made a positive impact) to Povetkin but does get him some attention on U.S. TV during Friday Night Fights season, at least in conversation, Povetkin may have a title trinket, but he's far from a champion.

After defeating Ruslan Chagaev for the pointless and all but fabricated WBA "regular" August of this year, Povetkin may have assumed that some major props were coming his way. But frankly, Chagaev hadn't looked good in a few years, Povetkin still wasn't particularly impressive in victory, still didn't look like he'd made any improvements, and then attaching his name to Holyfield in a groan-worthy set of post-fight photo ops, well, that didn't really help.

Povetkin is a talented fighter, and deservedly the favorite on Saturday. Chances are, he's going to be too technically sound for Boswell. But if the Russian is expecting an easy fight, he might wind up surprised. At 42, Boswell has nothing to lose, and is not going to get another shot. Cedric's best chance is to go right at Povetkin and test his gas tank. I'm going with Povetkin to retain, and truly believe he will in what winds up a forgettable fight, but I'm openly rooting for Boswell to score the upset. Alexander Povetkin by decision. 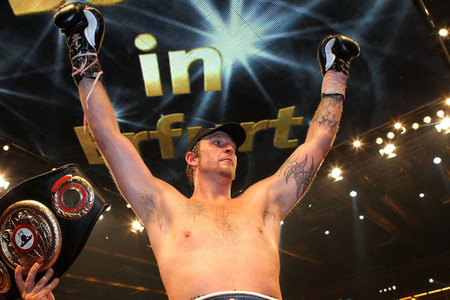 The real main event in Helsinki will pit Finland's own Robert Helenius against former British and Commonwealth champion Dereck Chisora in a fight that could, if all goes well, be the best heavyweight action fight of 2011. The two fights are currently on the brink of very different trajectories, as the 6'6" Helenius appears headed for the top of the division, while Chisora has hit a wall in 2011.

That could all change tomorrow, of course.

Helenius is coming in off of back-to-back knockouts of former world titleholders Samuel Peter and Sergei Liakhovich. A rejuvenated version of Liakhovich gave Helenius a stern test on August 27, but Helenius eventually was able to get him out of there.

In both fights, "The Nordic Nightmare" had his moments of doubt. But he fights off the back foot very well for a guy his size, and can punch with genuine power while going backwards. That trait has really set him apart thus far.

Chisora (15-1, 9 KO) lost his British and Commonwealth titles in July to Tyson Fury in a maddening outing that saw him for some reason decide to show up clearly out of shape, weighing almost 20 pounds more than he had in his recent fights, where he'd gotten on a bit of a roll.

When you look back on what Chisora's actually done, it's just not that impressive. Danny Williams was barely there when Chisora lifted the British title from him in 2010, and his win over Sam Sexton is domestic-level stuff. Chisora doesn't lack for sand, as he did twice sign up for a date with Wladimir Klitschko, which Klitschko didn't honor due to injury and then the chance to finally fight David Haye instead.

But Chisora remains a wild card. A fresh Chisora, in shape, isn't the damaged goods that Liakhovich and Peter are these days. But if he's not 100% mentally prepared, it's hard to see the squat heavyweight, at all of 6'1", finding a way to effectively combat Helenius' immense height advantage.

I do think Chisora could be a live dog here, but it's all dependent upon which Chisora shows up. One thing's for certain: He'll need a career best outing to beat Helenius, and I don't think he's got that in him. Robert Helenius TKO-11

Bad Left Hook will have live coverage of Helenius vs Chisora and Povetkin vs Boswell at 2 p.m. EST tomorrow afternoon.