Video Hype: Sir Henry Cooper Sings "Knock Me Down With a Feather"

Share All sharing options for: Video Hype: Sir Henry Cooper Sings "Knock Me Down With a Feather"

The late, great Sir Henry Cooper wasn't just a boxer. He was an author, a Brut spokesman, a man who did a great bit of charity work, a television personality, and, yes, a recording artist.

Eat your heart out, "Sometimes When We Touch." Here's Sir Henry Cooper's 1976 single "Knock Me Down With a Feather."

I doubt this is among anyone's favorite tunes, but it's great to hear it today and I think doing something like this speaks to the sort of man Sir Henry Cooper really was. He was by all accounts a true gentleman, and he obviously didn't take himself extremely seriously. Boxing is and always has been a very serious business. For one thing, anyone stepping into the ring is taking a risk with his or her health. And many fighters are ultra serious people. That's the way they are, and that's fine. But I have always taken to those who can have some fun with their fame -- Cooper had the sort of personality that makes Manny Pacquiao, for instance, a special attraction these days. Pacquiao considers himself truly lucky to be who he is. It seems as though Sir Henry Cooper did as well.

This song is also now stuck in my head and I suspect it will be days before I get it out. The song led to an entire album, Henry Cooper's Knockout Party: 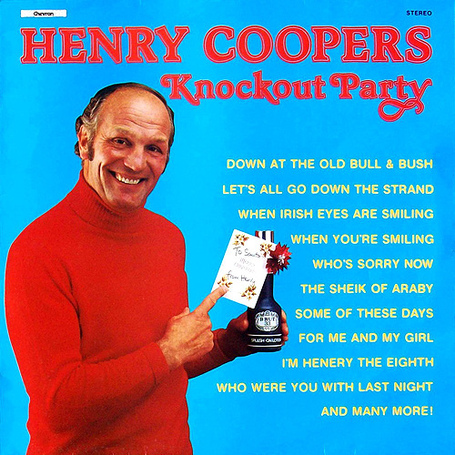