Since controversy -- or weakly alleged controversy -- is such a hot topic the last few days, I thought we'd take a look at what I feel are boxing's ten most polarizing figures. I'm limiting this only to active fighters (not retired, that is to say), and doing my best to stay unbiased -- I really like about half the guys on this list personally, but these are the guys who get the pot stirred up the most. You also have to be relevant to some degree.

I know Manny Pacquiao is a Filipino icon and his global popularity is through the roof and he darts around the world saving kittens from trees and all of this, but there is a very vocal section of the boxing fanbase that truly does not see him the way so many do. Common complaints:

Pacquiao is a revered figure and makes No. 10 (and no higher) because his popularity is very, very high. His approval rating would be excellent if we took a poll (especially an online poll). But his image is not without flaws or questions. Some of the people who question are as fanatical as his most aggressive supporters, but not all of them.

A lot of people seem to really not like Kelly Pavlik. I like him fine, though his reaction to his performance last Saturday I found a bit off-putting, and maybe that's the sort of attitude that bothers people. Sometimes -- not always, but in recent years since he became a star fighter -- Pavlik comes off as a bit entitled. He complains about his own image, bristling at attention or any type of criticism, even when you could expect absolutely nothing else. Pavlik's a kid (he loves calling everyone "kid") who just sort of is who he is, and I'm not sure stardom was really for him once it actually came along.

But he also has a lot of fans who really do follow him and feel a connection to him. Let's cut it down to what it is and not fib or act like this stuff doesn't exist. Kelly Pavlik represents a breed of fighter almost dead: The relevant, legitimate, talented, and accomplished white midwestern boy done good. Shared background and traits -- whether it's ethnicity or geography or blue collar work ethic or rising from a ghetto or living the high life or male pattern baldness -- will always help sell a boxer.

OK, this one I might be biased about. I loathe Arthur Abraham. I do know he has many, many fans. His Armenian heritage gives him one of the most vocal, passionate, and overlooked fanbases in boxing, for one thing. Vic Darchinyan didn't become a star fighter at flyweight by accident. And he's very popular in Germany, too. But I think a lot of people -- a lot of people -- who are neither Armenian nor German see Abraham as a complainer who thinks every body shot is a low blow, who has benefited from fighting mostly in Germany against often inferior competition, and whose best win is against... Edison Miranda? Zombified Jermain Taylor? Khoren Gevor? He has a tendency to come off as very smug, and without the charm or over-the-top trash talk antics of Darchinyan to balance things out. 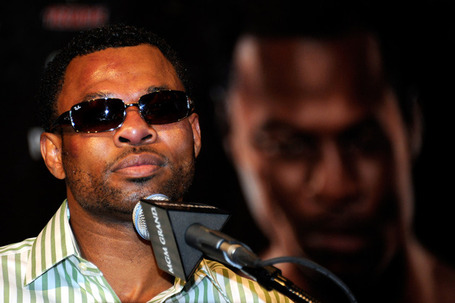 It seemed that Shane Mosley had become an old fighter that we all had largely forgiven. Now, this is not based just on yesterday. Mosley probably would have been just outside of this list before yesterday, but now Mosley has added the reputation as a sore loser who either can't read or just desperately wanted to find an excuse without outwardly making an excuse. His stock had already risen in this regard just a bit due to his lousy performance against Manny Pacquiao. Frankly, let's just call it what it was: It was an embarrassing performance that I know I never thought I'd see from Shane Mosley, even at 39 and way, way, way past his best. But that was sort of icing to the real cake of Mosley's polarizing career. The biggest issue, of course, is that with all the performance-enhancing drug chatter thrown around, Shane Mosley actually used them and we know this for a fact because he was forced to admit it. Mosley was a BALCO client. Like most, he pleaded ignorance. Like all of them who did, we didn't believe him if we had any sense.

But beyond the controversy through his career lies a soft-spoken, nice guy who fought the best constantly, always looked to grab the brass ring, provided a lot of memorable fights, and stands out as a top fighter of his generation. Mosley will always have his fans, and I think time will be kind to his image unless he makes it worse.

I can't remember another instance where a hot prospect fighter got knocked out, and so many people rejoiced. They laughed and partied and danced in the internet streets. They had told everyone so, that Amir Khan couldn't take a punch and couldn't fight and was overrated and arrogant and THEY HAD TOLD EVERYONE SO!

Since then Khan has gone back to work in consistent fashion and become one of the top fighters in the junior welterweight division, with appearances on P4P top ten lists coming soon. I think Khan has a lot of fans, or at least a lot of people who truly believe in his talent and star quality. But there are a lot of people that are never, ever going to like Amir Khan no matter how good he gets.

Fan reaction to the Klitschkos is basically one of three things:

I guess personally I'm somewhere between 1 and 2, and I have none of 3 in me. What's to hate? They're doctors. Plus Wladimir has become very funny lately.

Now here's a heavyweight so polarizing that even some of the K Bros. "haters" are rooting for one of them -- either of them -- to knock this loudmouth out and send him back to cruiserweight-level irrelevance on boxing's biggest stages. Haye is a talker, there's no doubt about that. And he's very good at it. But he really pisses people off sometimes with his flippant remarks that border occasionally on truly crass. But he's also an exciting presence in the heavyweight division. He's colorful, he can fight, and he at least gives the impression that his fights aren't boring.

He's 46 years old and if someone made this list every year, he'd probably have been on it for the last 15 years or so. There's not a lot to say here. Hopkins is and always has been a polarizing figure.

Margarito's sins are well-known, and the type that boxing fans take very seriously. But there is a portion of the audience that either feels he was never guilty and was persecuted by an inept commission, or feels he at least served his time. There isn't much to dislike about the way Margarito fights, and he's kept a loyal fanbase even through one of the great controversies in modern boxing history. But obviously he has that enormous portion of the audience that flat-out can't stand him, and even some people happy to see Manny Pacquiao bust him up so badly last November that he'll likely be forced into an early retirement.

Another guy who like Bernard would be a long-running constant on this list if it was made yearly, and without question, the most polarizing figure in boxing.

Even before the "Pretty Boy" became "Money" Mayweather, he had wildly different reactions from the boxing audience. Mayweather is, make no mistake about it, a marvel in the ring who naturally can do things most guys can never learn. He is gifted beyond criticism in the ring, and accusations that he "runs" are greatly exaggerated by people who have never seen real runners in action, apparently. Mayweather's fans truly love him, to the point they believe any ridiculous thing he says or back up any inflammatory, dumb statement he makes. They repeat his would-be catchphrases like it's the gospel according to Floyd.

But of course there's the rest. His public image has been really destroyed with his recent wave of alleged crime, and plus a guy like Floyd who purposely plays the villain is going to eventually get people to really hate him, and not just "hate on" him. He's everything that serious fans criticized about hip-hop in, like, 1999-2002. He's perceived sometimes as being all image, as well as a guy who won't take on the best.