Share All sharing options for: Jan Zaveck vs Andre Berto Show in Development

BoxingScene.com reports that a DiBella Entertainment-centric show is being worked on for a possible August date. The main event would be a welterweight trinket fight between Jan Zaveck and Andre Berto. 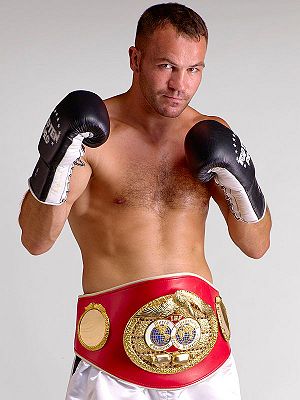 Berto (27-1, 21 KO) lost his first fight as a professional on April 16 to Victor Ortiz, and is looking to come right back and claim another belt. Zaveck (31-1, 18 KO) holds the IBF title, which he won 2009 from Isaac Hlatshwayo. While Zaveck may be considered a weak titlist -- and his last defense was pathetic -- it's hard to argue that his wins over Hlatshwayo and Rafal Jackiewicz are really any worse than Berto's pre-Ortiz schedule had been, and fairly easy to argue that those two wins are better than what Berto has done.

In other words, it's a good fight. Zaveck is a legitimate welterweight and while he might not have any name value in the States, it's at worst a more legitimate fight than many of Berto's past HBO mismatches.

The co-feature would see Peter Manfredo Jr. (37-6, 20 KO) face Brian Vera (18-5, 11 KO), which would at least likely be a fun fight to watch given that Vera is almost always fun to watch. Welterweight contender Randall Bailey (41-7, 36 KO) could also be on the card. Bailey is currently the IBF mandatory, but is willing to step aside with a guarantee that he gets first crack at the Zaveck vs Berto winner.

Now aside from the news, let's talk about this a little. I'm not lying when I say I think that Zaveck vs Berto is a very fine fight, but I also get this little nagging feeling that this is DiBella and Berto looking to step back into "he's a champion! Really, he's got a belt and everything!" like before by picking off the "easiest" titleholder there is at 147 who is willing to fight Berto, as I doubt Vyacheslav Senchenko is really looking for a move to the States, while Zaveck seems enthusiastic about just that.

And while Bailey is dangerous against anyone because of his rocket right hand, the design of setting up Berto to beat Zaveck, then face Bailey, does seem a bit, well, Berto-ish. It's not even that I think it's all that bad, because I don't. I'd be happy to watch either fight. But they're definitely not pushing for a rematch with Ortiz, you know what I mean? It's more back to business as usual for Berto and DBE, and I guess you can't really blame them.