The super middleweight division is both hot and top-heavy at the moment, and like all divisions, will soon be in need of some fresh blood to maintain its spot as one of the most exciting in boxing. While Andre Ward and Lucian Bute run the division for the moment, that won't last forever. They'll move up, they'll lose fights, or whatever else.

So let's take a look at some of the rising names (and some names who might never appear in another piece on this site), and if I miss anyone, throw them in.

Groves won the biggest fight of his young professional career on Saturday, narrowly outpointing old amateur rival James DeGale. The Hammersmith fighter is one of those guys who doesn't stand out as exceptional, really -- but at 23, he's already pretty well-rounded, and with time come the tricks of the trade that he'll start to pick up. One knock on him before was criticism of trainer Adam Booth, but Booth is now getting a lot more credit in the wake of Groves' very smart fight plan against DeGale. He probably doesn't have DeGale's pure upside, or ceiling, but he seems mentally stronger than DeGale, in part because he talks a lot less and doesn't give off the same air of desperate faux-confidence.

Don't mistake a loss for a loss in prospect status. Any night that exact fight is fought, it would just depend on the ringside judges. A different crew could easily have given the fight to DeGale. A former Olympic gold medalist with great talent, DeGale seemed a bit mentally overmatched with such a tough fight in just his 11th pro outing. But before that, he marched through solid domestic competition like Paul Smith and Carl Dilks. DeGale could still wind up the class of this prospect group in time, and truthfully might get to world class quicker than Groves does, despite the result of their fight. There's no rush for either man.

There is a small rush for Quillin, the 27-year-old American born in Grand Rapids, Mich., who fought out of Brooklyn for a while and now trains with Freddie Roach in the Wild Card Gym. His injuries appear to be a thing of the past, and now he can get back to business. He's not a kid anymore, and it seems like everyone knows that, but until he steps into a world class fight, he's still a prospect. His April destruction of rugged veteran Jesse Brinkley was emphatic, and it looks like Quillin is back in the run. He also appeared stronger at 168 than he did in the past at 160.

I think of Rodriguez sort of the way I think of Groves. Even if one of them starts faltering, and they might, a long and enjoyable career is probably in the cards. Rodriguez and Groves both have the disposition to make good fights. Groves has proven he can beat an ugly spoiler-type like DeGale. Rodriguez has prospect quality wins over the likes of Darnell Boone, James McGirt Jr, and Aaron Pryor Jr to his credit already. "La Bomba" is a Dominican native based in Worcester, Mass., and has started to build a small TV profile.

"Tommy Gun" is a 6'4" southpaw who could be hell for just about anyone if he keeps developing. He went to a draw last year in a South African version of DeGale vs Groves against Isaac Chilemba, who has since moved up to light heavyweight.

After the jump: Notes on other names to watch, or just notes on guys who have names.

Mexican puncher Marco Antonio Periban (13-0, 10 KO) is starting to turn a few heads. He's 26, tall (6'2") and has wiped guys out early. But the more early rounds KO artists you see, the more you know to beware once they start fighting better talent that can take punches, so he's still a definite wait-and-see.

There's been a bit of a roundtable effect with Dyah Davis (19-2-1, 9 KO), Aaron Pryor Jr (16-3, 11 KO) and Marcus "Too Much" Johnson (20-1, 15 KO) lately. Pryor beat Davis over eight last November, but two months later lost to Edwin Rodriguez. He then beat Librado Andrade on May 6. He's a pure project despite his name, sort of like a better version of Ronald Hearns, and has the body you'd expect of a former basketball player -- 6'4", and a massive 84" reach. The more he learns, the more problematic he could be, but he has to do it fast, as he's already 32. Johnson is the youngest of the group at 25, but lost decisively to Davis in April on ShoBox. Davis is 29, so not quite in the "better move fast" position of Pryor, but not too far off, either. I still like Johnson to wind up having the best career, but that will only happen if he starts seriously dedicating himself to boxing. His inactivity bit him in the ass against Davis, which may have been overdue.

Davis also recently fought Francisco Sierra (23-3-1, 21 KO), a 23-year-old Mexican scrapper who has been up and down of late. They went to a majority draw, but most observers felt Davis deserved the W. Sierra was knocked out in just 2:16 by Edison Miranda back in 2009, but he also beat the living hell out of Chicago's hyped Don "Da Bomb" George (22-1-1, 19 KO) last July. That was a serious beatdown, and George's struggles against Osumanu Adama three months prior to that don't speak well for him going forward, either. I personally have little faith in George to become anything other than an action fighter who can get reliable TV dates on Friday Night Fights-level shows. There are worse things. 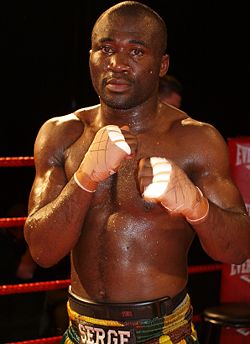 Australian by way of Cameroon, Serge Yannick (13-1, 6 KO) has a loss to Michael Bolling (12-2, 10 KO), but has since rebounded to beat Joseph Kwadjo and most recently, veteran Shannan Taylor. Bolling's career has dipped with two straight losses to Isaac Chilemba and Blake Caparello, and his bubble is close to burst if it hasn't already been.

Another Chilemba connection: Maxim Vlasov (19-1, 10 KO) lost a close decision to the South African in February on Friday Night Fights. The 6'3", 24-year-old Vlasov has fought largely in his home country, but has also done a good amount of work in the States given his experience level and the fact that he's not American. His most notable wins so far have come against Jerson Ravelo, Jonathan "Red Dawg" Reid and Julius Fogle.

Another Russian prospect is Denis Grachev (10-0-1, 6 KO), who recently put the hurt on Vladine Biosse (11-1, 6 KO). Biosse was fighting in his home base of Connecticut, and the former high school football and track star was just totally overwhelmed by Grachev, 28. Grachev lives in San Diego and also competes in Muay Thai and MMA. Needless to say, he was not imported to Connecticut to beat Biosse, but he did. Biosse is still super raw and needs a lot of work.

New York's Will Rosinsky (13-0, 7 KO) doesn't profile as a long-term prospect of note, and he probably isn't. But he's got an interesting personality, and in 2009 gave Thomas Hauser one of the most honest interviews I've ever read. Here's part of it:

"It sucks to get hit. The punches hurt; I promise you that. I can take a punch. But I don’t care how good your chin is, you don’t want to get hit. And you can have a fight where the winner’s brain gets hit just as much and just as hard as the loser’s. You can win and walk out of the ring just as messed up as if you’d lost. I get hit too much, especially in the gym. I like boxing, but I don’t want to do it forever. That’s for sure."

Rosinsky will probably be a teacher instead of a pro fighter.

Philly's Farah Ennis (17-1, 11 KO) was building up some local steam before meeting Alexander Johnson (11-0, 4 KO) in Atlantic City on April 2. Johnson scored the upset by 10-round majority decision. Johnson's nickname, as you probably expect, is "The Great." Outside of fighting each other, both have mostly feasted on chum.

The future of the UK's Tony Quigley (13-2-1, 6 KO) is up in the air right now. Though he's still just 26, his war of a fight last October with Paul Smith saw him drop the British super middleweight title he'd won by beating Tony Dodson. After some time off, Quigley returned in March against a fighter with a 10-19-2 record, and escaped with just a four-round draw.

Former American Olympian Shawn Estrada (12-0, 11 KO) has moved brutally slow since turning pro in 2008, but he's also had some back injuries to battle, and those have unquestionably set him back developmentally. He's simply not the fighter he'd have been predicted to be by 2011. And he also has other interests in life. I do hope his career picks up by the end of 2011.

Argentine Olympican Ezequiel Maderna (13-0, 9 KO) could well be worth watching. Here's his full last fight, a 10-round decision over Ruben Acosta:

George Groves got a rough test from Kenny Anderson (12-1, 8 KO) last November. Anderson decked Groves, but was stopped by a rally from the favored prospect. Anderson is 28 and hasn't fought since, but could well have something. He seriously hurt Groves in that fight and nearly knocked him off his path. Former amateur standout Dominic Wade (11-0, 8 KO) has torn through weak competition after turning pro in 2009. Anthony Dirrell (21-0, 18 KO) has a name, but he doesn't have his brother's talent.