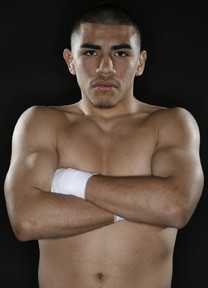 Top lightweight prospect Frankie Gomez didn't have it easy tonight in Chicago, but he survived a tough eight rounds and came out with a majority decision win in the eight-round main event of Solo Boxeo Tecate.

Gomez (11-0, 8 KO) scored a second round knockdown of Adrian Granados (8-2-1, 5 KO), but struggled to keep the local favorite off of him, and looked clearly uncomfortable at points with Granados' pretty consistent pressure. The blue chipper from East Los Angeles has had it pretty easy thus far in his pro career, but tonight he got a legit test in his 11th pro fight, and it was a mixed bag.

On the good side, Gomez showed toughness, heart, and desire. On the bad side, Gomez showed some flaws, and was stung a few times late by Granados, an unheralded 22-year-old fighter who may be more than meets the eye, and might have a real future himself if he can get the right training and opportunities.

In the night's co-feature, Omar Figueroa (13-0-1, 10 KO) made quick work of Marcos Herrera (6-7-1, 2 KO) in a lightweight bout. Figueroa, 21, didn't make weight, coming in three pounds over the limit at 138 pounds. But he was very aggressive and threw serious shots with intent from the beginning. In the second round, he just ran over the durable Herrera, 23, who has done better against more highly-touted Golden Boy prospects this year. A left hook knocked Herrera down once in the round, and a counter left hook put him away at 1:19 of the frame.

For those who missed it, I do recommend checking out Gomez vs Granados, as it was a terrific scrap and the sort of thing that can make a show like Solo Boxeo Tecate worth tuning in to. When we get legitimate fights for prospects like this one was, it's the kind of show we all want it to be.