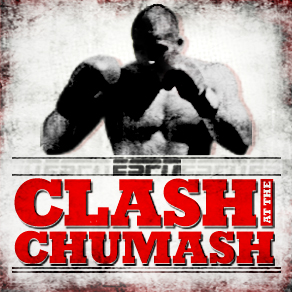 Tonight's edition of Friday Night Fights is the third-to-last of the very successful 2011 season of the ESPN series, and is live at 9 p.m. EDT on ESPN2 and ESPN3.com.

The main event pits junior welterweights Tim Coleman (19-1, 5 KO, Baltimore) and Vernon Paris (24-0, 14 KO, Detroit) in a 10-rounder from the Chumash Casino in Santa Ynez, Calif., in a fight that in all honesty has a 50-50 shot of being an interesting battle or a style clash stinker.

Coleman, 27, hit a bit of a rough patch a few years ago when he drew journeyman Martinus Clay and lost to James de la Rosa, but he's come back from that fairly well. In his last four, he's beaten Clay, topped Mike Arnaoutis in a very controversial split decision, knocked out Patrick Lopez, and last time out defeated Sergio Rivera on April 29.

Paris, 23, is a fighter without any real peers in today's game, I'd say. He boxes in almost a hyper old-school manner, and pulls out crafty tricks of the trade that you just don't see anymore. He's mostly fought in the Michigan clubs, where he's beaten highly faded versions of Emanuel Augustus and Courtney Burton, and this will be his second trip to the Chumash. Last year, he had some real trouble in a fight with Juan Santiago, escaping with a split decision over eight rounds. Paris is by no means a polished product, and has had stamina issues in the past. He's had his issues over his career, too, with three no-contests all due to failed drug tests. And he fights with a bullet lodged in his back, which I'm sure Joe Tessitore and Sergio Mora will go further into.

And if you hadn't heard yet, Sergio Mora will be at the commentary table with Tessitore tonight, as Teddy Atlas is in Russia working with Alexander Povetkin for Povetkin's August 27 fight against Ruslan Chagaev.

Tonight's co-feature is a really interesting fight, in my opinion, between dormant former featherweight titlist Cristobal Cruz and upstart Art Hovhannisyan. Cruz (39-12-2, 23 KO) fights in a whirlwind style and is known for getting dirty if he has to, but hasn't fought 15 months and is moving up two divisions for this one. Hohvannisyan (14-0-1, 8 KO) beat the hell out of Archie Ray Marquez on ShoBox in June, bursting that prospect bubble and making one for himself.