Share All sharing options for: Brook vs Hatton: Official Fight Poster for March 17

Here's a look at the official fight poster for the March 17 fight between Kell Brook and Matthew Hatton, which was announced earlier this morning (US time) and will air on Sky Sports 1, promoted by Matchroom Boxing. The poster is via Eddie Hearn on Twitter. 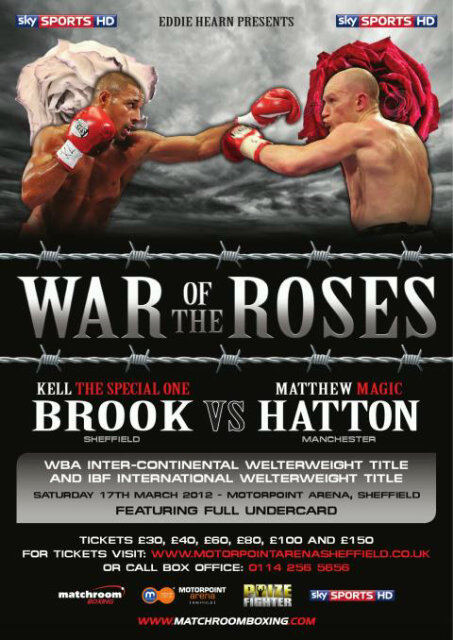 The fight is being dubbed "War of the Roses," which is nothing new and is really probably more expected or even necessary than anything, what with this being a fight between men representing Yorkshire (Sheffield's Brook) and Lancashire (Manchester's Hatton). Jamie Moore vs Ryan Rhodes had the same title in 2009, for instance.

Is anyone giving Hatton a shot in this fight? Let's not pretend that he's being brought in to this fight to do something other than lose, but at the same time, it would be a serious surprise if he didn't turn up to win. Hatton, as I said before, does not roll over. What he lacks in physical ability he makes up for in grit. It should not be enough to win a fight against someone like Brook, who is just much more talented, but do you give him a legit chance at the upset here?