Here's some video from the Cardiff press conference this week to promote Nathan Cleverly's February 25 fight against Tommy Karpency. You might assume that would mean that Karpency, who is challenging for Cleverly's hard-earned WBO light heavyweight title after all, would be, you know, there, but no, he isn't.

I don't mean any of this to be a jerk toward Tommy Karpency. I hope he shows up and shocks the world and wins. I really do. That's what promoters and fighters deserve for making these type of fights when you get to this level of the sport, because this is a sham in every sense of the word.

It's not been booked in any way, shape, or form to be competitive, or a legitimate test of Cleverly's mettle. It has been booked to baby Cleverly with a hometown "title defense," and at this point, I honestly consider Cleverly to be one of the worst paper champions in all of boxing.

He got the belt because Juergen Braehmer wouldn't show up, which fair enough I suppose, but his defenses have been Aleksy Kuziemski, Tony Bellew, and now this. That Cleverly struggled with Bellew says something about Cleverly, alright, but it doesn't say much good about his prospects to become a true top star or elite fighter.

This fight is such an afterthought, such a pure money grab and nothing more, that they don't even have Tommy Karpency at the press conference. And they shouldn't! It wouldn't be worth the cost of flying him over because nobody knows who he is and they aren't going to convince anyone to care in the next six weeks, either.

If this seems as though I'm being harsh, good, because that's how it's intended. Cleverly's title run has been abysmal thus far and there is no hope on the horizon that it will be anything more than that, as they appear for all the world to be setting up glass-jawed, shrunken down Enzo Maccarinelli as Clev's next opponent.

I'm not saying Nathan Cleverly can't fight. I'm simply saying that the time to go, "Oh what a great young prospect, I'm on this train" is, or at least should be over. It's time for him to step up and actually prove he's a top light heavyweight, because right now, he's coasting on his old prospect reputation, promotional backing, and a meaningless title belt.

Now having said ALL THAT, let's get to Frank Warren's absurd thoughts on this fight, as he uses his house interviewer to set him up with some softballs and whiffs on them anyway:

The interviewer, possessing a wealth of boxing knowledge I am certain, asks, "Karpency is ranked as No. 11 by the WBA. Some people are saying this is going to be an easy fight for Cleverly. Do you think there's any justification for that?"

Warren intelligently responds, "I think there's no justification for it. He's a top 10 ranked fighter, he's there on merit, and at this stage of Nathan's career, I think it's a good opponent to fight."

They keep calling it the WBA, when obviously they're talking about the WBO. Combined with the fact that Karpency isn't even at the press conference, it tells you the amount of thought that went into making this fight.

Now the greatest mindscrew there, obviously, is that Warren, having just been told that Karpency is ranked No. 11 by the WBO (which is bullshit to start, but let's go further), claims Karpency is a top ten ranked fighter. As much as I'd like to believe it's just a "mistake," it just comes off as though Warren is so smug about all of this, and so eager to lie, that he's lying literally seconds after a fact was stated.

Furthermore, Karpency is hilariously ranked 11th by the WBO...as a cruiserweight. He has rarely fought over the light heavyweight limit, and has never truly fought as a cruiserweight. His highest weigh-in was 183 pounds against a guy named Julius Jackson (who was 3-7) at the time, two fights ago in June 2010. 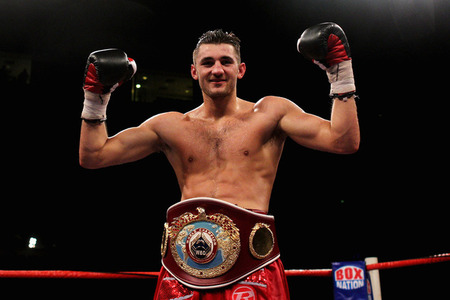 But yes. Bravo, WBO and Frank Warren and Nathan Cleverly. Surely you have found a diamond in the rough here, a serious contender who truly deserves this world title shot and has absolutely earned it.

And those people who say the fight is a mismatch and a waste of time and an easy way to get ol' Clev a win? They're idiots. What do they know? The fair WBO has him ranked 11th in a division he's never truly fought in, so obviously the facts and the logic and the reasoning are on YOUR side.

"Would I like him to be fighting Bernard Hopkins or Chad Dawson right now? Absolutely," Warren asked and answered himself.

"The problem we've got is the only date available in the venue down here is February, and we're limited by the capacity, which is less than 5,000," Warren further explained.

So it's a sub-5,000 capacity homecoming that the people of Cardiff should celebrate. Warren says that this being a homecoming is the most important thing. But it seems more like a last resort than a party.

Being protected as "Britain's only world champion" left standing after a rough 2011 for UK fighters on the top stage, Cleverly is being babied with a fight like this. The worst part is, at least from a boxing standpoint and progressing his career, it will do nothing for him. Karpency is the type of fighter Cleverly was beating in 2008, when he started stepping up to domestic contention after three years of figuring out his weight and his potential.

The criticism being lobbed at Warren and Cleverly is beyond valid. It's simply right, and their position is not even arguable. If Cleverly is going to be called "world champion," if he's going to be considered a true top fighter at 175 pounds, then this fight is laughable at best, and if Cleverly loses some respect for taking this type of fight at this stage, then as unfortunate as that may be, that is also deserved.