Share All sharing options for: Ricky Gervais Says Wladimir Klitschko Has His Back at the Golden Globes

Ricky Gervais, the British comedian who is set to once again host the Golden Globes on Sunday night, posted a photo on his Twitter of himself with world heavyweight champion Wladimir Klitschko tonight. Here's the photo, which helps to make very clear how large of a man Klitschko really is: 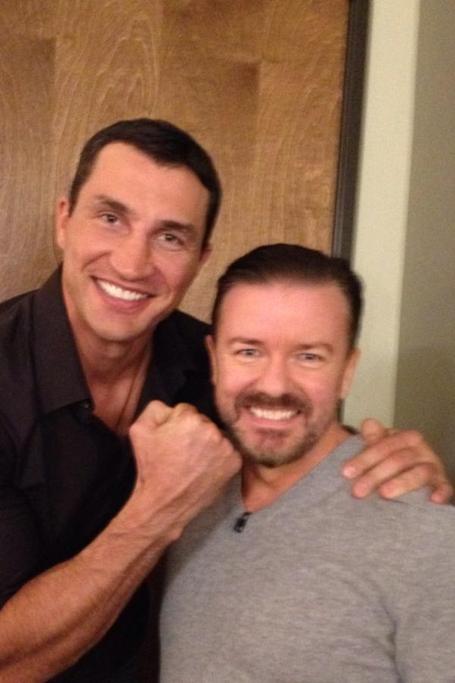 Gervais said of Klitschko, "He's like a man, but bigger.. He also said he's got my back at the Globes. I'm covered."

Gervais, of course, came under pretty heavy fire from some of the humorless rich people who take themselves incredibly seriously because he was "too mean" to Tim Allen or Robert Downey Jr or whatever last year, but is being brought back for this year's awards, I assume largely because nobody cares about the Golden Globes otherwise.

As for Klitschko, he's set to fight Jean Marc Mormeck on March 3 in Germany, a fight that just really couldn't be much worse than it is.

After the jump, you can relive all of Gervais' hilarious bits from last year's Globes if you wish. Hilarious in my opinion, of course.